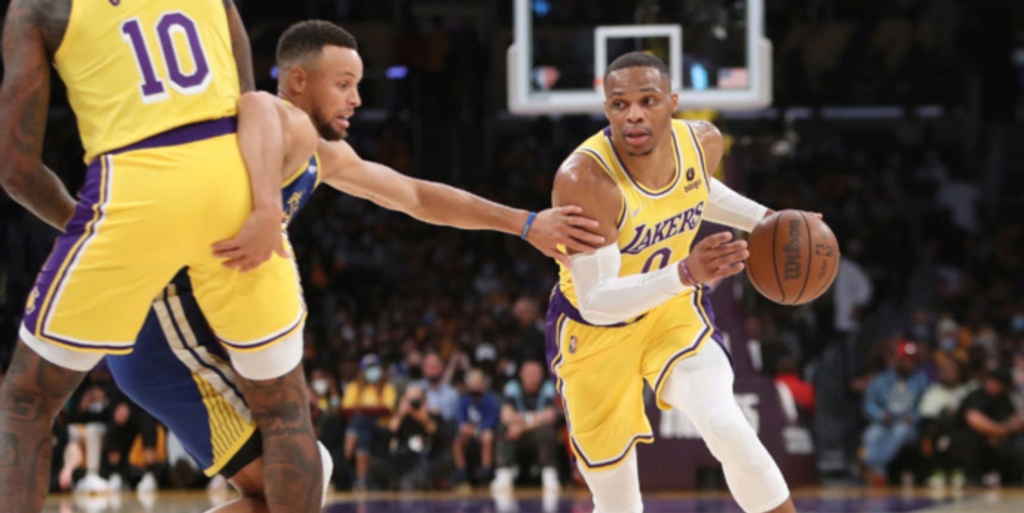 Hi, hello, and welcome to another edition of "Roaming The Baseline"! This will be a weekly endeavor where I point out some things that caught my eye: a hot or cold streak from a player, a developmental flash, a well-run play, a funny tweet, who knows? There will be film — it’s me, so of course there will be film — but this will also be a bit looser. It’s an extension of my Twitter feed, if you will.

IT TAKES TWO (TO THE BALL)

The Golden State Warriors are humming to start the year, shaky performance against the Oklahoma City Thunder not withstanding. They're 4-0, sporting the NBA's 6th best net rating (plus-7.3) and offense (111.4).

It's not a shock that the Warriors are playing well, but the way they're getting it done is both fun and encouraging when projecting forward.

The Dubs have trended smaller; their nominal starting center, Kevon Looney, is averaging a shade over 16 minutes a night. That has allowed them to play with more pace and, with Looney off the floor, more space.

As a defense, the last thing you want to do is give Stephen freakin' Curry more space to operate in. You can't afford to single-cover him; any slip from his primary defender causes mass hysteria elsewhere.

Nobody bends the game quite like Curry. So surrounding him with space and quick-processors make the Warriors virtually impossible to defend when they're rolling — figuratively and literally.

You've seen the song and dance before. Curry shakes free — either darting around in transition, or running a defender off of an on or off-ball screen; a second defender jumps up to help; a pass is slipped to a rolling teammate, and that teammate slings the pill to an even more open teammate.

Unless you have the personnel for a switch-literally-everything scheme, I'm not sure what you can do. And even if you do, Curry can still dance on you, create an advantage on the drive, and start the chain all over again.

It's been fun to track his usage on the floor, particularly in ball screens. It was clear that traditional pick-and-rolls wouldn't do the trick; Steve Jones Jr, my co-host at The Dunker Spot, noted how teams were simply ducking under screens against Westbrook pick-and-rolls, and that creativity would be needed.

We've seen some alterations on both sides. With Westbrook handling the ball, the Lakers have dug into their bag with "ghost" and "flat" screens.

Using a (movement) shooting threat to run up to, then abruptly dart away from Westbrook has generated some fruitful stuff.

Going with flat screens — setting the pick directly on a defenders back, as opposed to their side — makes it difficult, at best, to duck under the action.

It's also nice to see Westbrook actually setting screens. Inverted ball screens with him and LeBron should lead to small-on-LeBron switches that defenses don't want, or short-roll opportunities for Westbrook.

More of this, please.

HASSAN WHITESIDE: DOING THE LITTLE THINGS (FOR NOW, AT LEAST)

The Utah Jazz are also off to an undefeated start (3-0). While I'm here for Rudy Gobert owning the interior on both ends, and Donovan Mitchell making magic in pick-and-roll (he'll hit shots soon), you know who I've enjoyed watching?

That's right, 8 points and 8 rebounds in 16 minutes per game off the bench is doing it for me right now.

In all seriousness, as someone that covered his entire stint in Miami, one thing that frustrated me was how much he left on the table. His physical gifts and (before knee issues sapped it) rare nimbleness for a guy his size were incredible. He also had a tendency to break scheme to chase blocks, and just. would. not. set. solid. screens.

Both things are happening so far.

Whiteside has been a legit deterrent in Utah's drop scheme. Though he's averaging a little over a block per game, it's been fun to see him go with vertical contests instead of looking to swat the ball out of bounds.

Offensively, he's setting screens. Holding before releasing. Flipping the angle when necessary. It's simple stuff, but so important to getting teammates open.

Utah runs a "Veer" set — the screener faking a ball screen before darting away to pry a shooter loose — and I mean, look at Big Fella work! Stonewalls Monte Morris, waits for Jordan Clarkson to survey the floor, then flips the pick to disrupt Morris' path as Clarkson attacks.

This version of Whiteside, if he commits to this moving forward, is worth a lot more than the vet's minimum.

Trapped in the Elevator

If you're able to bet in your state, and you can find a site for it, you should hammer whatever the number is on Duncan Robinson scoring the Heat's first basket. Virtually every game begins with choreography designed to spring him free for a triple.

Two things stand out to me, here. Using Chicago action — a pindown into a dribble handoff — as decoy action is pretty cool, though I wish Jimmy Butler would've sold it a little more.

Beyond that, Robinson electing to push put his defender into the elevator instead of using it for himself? Chef's kiss. Three points on the board.

Give Me a Lift

Brief aside: we have to tinker the "alley-oop attempts aren't actually shooting fouls" rule at some point. There's no reason Dwight Powell shouldn't get free throws for that.

Anyway, we get not one, but two (2) lifts to stress out Toronto's defense. As Powell trots up the floor to set a screen for Luka Doncic, Tim Hardaway Jr. sets up shop above the break at the same time. While Luka and Powell get busy, Kristaps Porzingis lifts from the dunker spot (subscribe!) to the left elbow area.

Luka is trapped, setting up a 3-on-2. With Hardaway Jr. being spaced where he is, the 3-on-2 is really a 2-on-1 with Dallas' frontcourt setting up a high-low read against Toronto's shortest guy. No wonder this ends in a foul.

Terrence Ross had himself a night on Sunday, scoring all 22 of his points in the 4th quarter during a surprising Magic win. What tripped me out about the explosion, aside from its ridiculousness, was how easily it happened.

Anyway, here are some — not all, but some! — of the stories I’ve read this week that I think you should check out. Their Twitter handles will be linked under their names, so click and follow if you don’t already.

Mirin came through with the goods on Immanuel Quickley.

Chris wrote about the intrigue of this year's Chicago Bulls. They're off to a great start so far.

Caitlin with some early goodness on the Pacers' starting frontcourt.

Not a traditional basketball piece, but this from Josh Robbins is well worth your time. Best of luck on the Wizards beat!