Revisiting the last 10 NBA MVPs: Did the voters get them right?

The process of selecting the NBA's Most Valuable Player is inherently subjective. Circumstance factors into the equation, as does recent history. Big picture, the MVP award is not meant to celebrate the best player. Instead, it attempts to reward the player with the biggest impact – meaning that winning plays a major role.

There are a few blatant examples in the past 30 seasons where the general consensus is that the wrong player was crowned MVP, many of which involve Michael Jordan losing the award during certain years in his prime. However, those aren't the only controversial recent MVP awardees.

Considering all the debate around this award, it's worth examining recent MVPs as scientifically as possible. Let’s take a look back at the 10 most recent MVP races to explore what the voters were thinking and whether they got it right:

Jokic’s all-around ability was on full display in 2020-21. He dragged the Denver Nuggets to the third seed in a tough Western Conference despite losing his running mate, Jamal Murray, with nearly 20 games remaining in the regular season.

Admittedly, Jokic didn’t have a peak LeBron James or a healthy Steph Curry or Kawhi Leonard to compete with, but each of those stars were playing alongside another star, making it less likely for them to win.

From a voting standpoint, the 2020-21 MVP was over before it started. Jokic collected 91 of 101 first-place votes.

Prior to leading the Bucks to a championship in 2021, Antetokounmpo was a polarizing player. The narrative around him was that his shooting limitations would hold him back from realizing his potential – but this was clearly wrong. That didn’t stop MVP voters from falling in line behind him either.

Antetokounmpo received 85 of 101 first-place votes. James was the only other player to receive a first-place vote (16.) In the post-Jordan era, James is also the most complicated player to gauge for MVPs. He’s received four MVPs thus far and was widely seen as the final word in the “best player on the planet” debate until around 2019-20.

An argument can be made against Antetokounmpo due to the rarity of back-to-back winners (Antetokounmpo is just the 11th player to win back-to-back MVPs in NBA history), the perception around his limitations and the assumption that the Bucks were inherently capped in how far they could go. But if we’re being honest, Antetokounmpo’s 2019-20 season was even more impressive and deserving of an MVP than his first – save for the fact that he had the lowest win shares (11.1) of any MVP since Karl Malone in 1998-99 (and the fourth-lowest ever.) 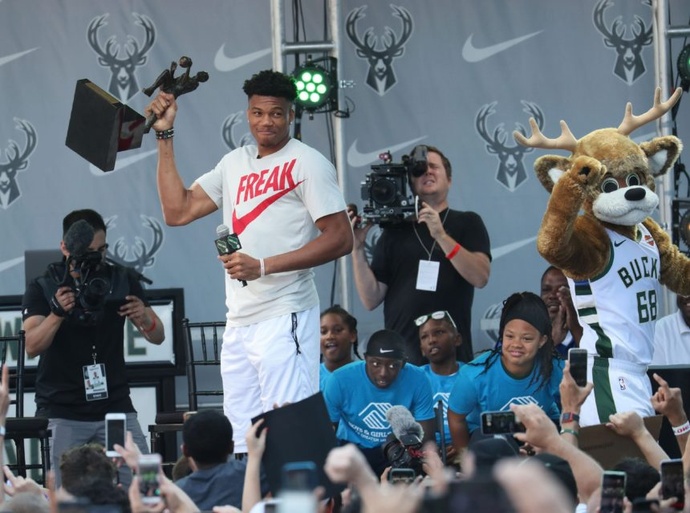 Antetokounmpo’s 2018-19 season was incredibly impressive. He won the MVP at just 24 years old, making him the ninth-youngest player to win. Still, this one may have been a reach for the voters, who favored a very good season by a breakout superstar over a great season by an established one.

Antetokounmpo received 78 first-place votes, compared to James Harden’s 23. That was the final season in Houston for Harden and Chris Paul, and it was one in which Harden led the Rockets to a 53-29 record (including a 12-5 record without Paul). But the perception of Harden among the media was complicated. MVP voters seemed apprehensive to name Harden a back-to-back winner, despite his averaging more points per game (36.1) in a single season than anyone not named Wilt Chamberlain or Michael Jordan. His scoring average was the seventh-best in NBA/ABA history.

Harden’s 2018-19 season was far from a sure thing as far as MVPs are concerned, but objectively, Harden’s season was more impressive than Antetokounmpo's.

Harden may have frustrated basketball purists, but at his pre-COVID best, he was as impactful a regular-season player as we’ve seen. The 2017-18 season may not represent his best statistical output, but it was still pretty darn impressive.

Harden earned 86 of the 101 first-place votes, and rightfully so. At his best, Harden ranks among the most infuriating players to game-plan against. He put defenders on skates, got to the line at will and connected on an obscene percentage of difficult shots.

Westbrook’s style of play, much like Harden's, was (and is) polarizing among basketball purists. Still, Westbrook couldn’t be denied this MVP award after averaging a triple-double for an entire season for just the second time in NBA history. Sure, Westbrook did so in each of the next two seasons too, but a.) the first time is always the most impressive, and b.) Westbrook was rewarded in 2017 for keeping the Thunder afloat after Kevin Durant fled to Golden State in hopes of finding a greener pasture (which he did).

While voters were never smitten with Westbrook, he secured enough support in 2016-17 to take home the award. Westbrook secured 69 of the 101 first-place votes, significantly more than Harden (22).

Curry was among the most obvious MVP winners of all-time in 2015-16. As great as he was in 2014-15, he really took the league by storm this season. He shot an even better three-point percentage than in 2014-15, he led Golden State to an all-time-best 73-9 record as easily the best player on the defending-champion Warriors.

The 2015-16 MVP race was as non-competitive as ever, as it was the first unanimous vote in history. Curry won all 131 first-place votes, securing his second consecutive award. 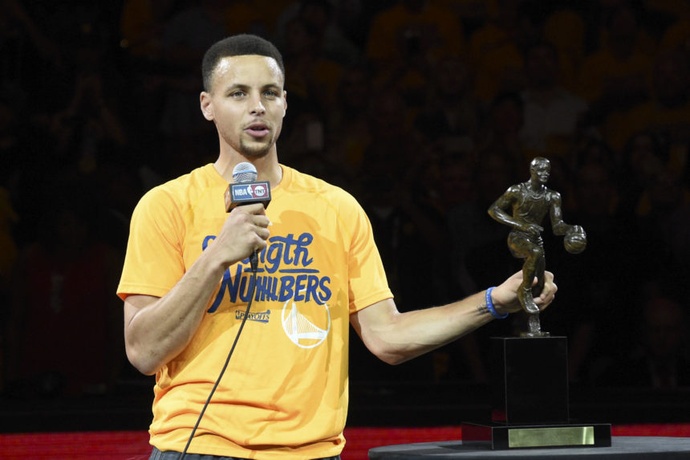 Curry’s 2014-15 season is tough to gauge. On the one hand, this is the season in which Curry became a global icon, challenging the league’s balance of power and making teams rethink what was possible by forever altering the way the game was played.

Still, Curry’s individual impact was debatable. He was on a perfectly-balanced team whose sixth man (Andre Iguodala) was even so good that he ultimately won Finals MVP. Objectively, Harden’s season was more impressive – albeit less historically significant – and LeBron James was clearly more valuable to his Cavaliers. Still, Curry managed to take home 100 of the 130 first-place votes, netting him his first MVP.

Durant’s 2013-14 season wasn’t his best, but it was easily deserving of the MVP. His only real competition for MVP, LeBron James, was coming off back-to-back wins, making it all the more likely that voters would give the award to someone else. Not that Durant needed the help though.

Durant elevated his game in 2013-14. He was already an elite scorer, but this was one of the first seasons in which he put it all together. Durant blossomed into an all-time great in 2013-14, leading to an easy decision for voters, who ultimately gave him 119 of the 125 first-place votes.

James continued his dominance en route to the Heat’s second-consecutive title in 2012-13, and he even shot a career-best 41% on three-pointers. He’d already achieved near-unanimous support as the league’s best player, and he was treated accordingly by MVP voters.

James’ 2012-13 season was nearly as dominant as Curry’s unanimous MVP season. James won 120 of the 121 first-place votes, with only one dissenter choosing Carmelo Anthony.

After losing to Dallas in the 2011 NBA Finals, James’ priorities were probably different. Specifically, he likely viewed regular-season accomplishments differently. Still, he was brilliant in his third season with the Heat, persevering through a tough year in which running mates Dwyane Wade and Chris Bosh missed 33 and 25 games, respectively. James missed 20 games himself; but he was so good, it didn’t matter.

Debates over sports awards are inevitable, but after taking a closer look at the 10 most recent MVPs, it's clear that voters have made the right choice more often than not. In fact, one could argue that eight of the last 10 MVPs were picked correctly. So, as we approach the 2021-22 NBA award season, it seems more likely than not that voters will make the right decision.