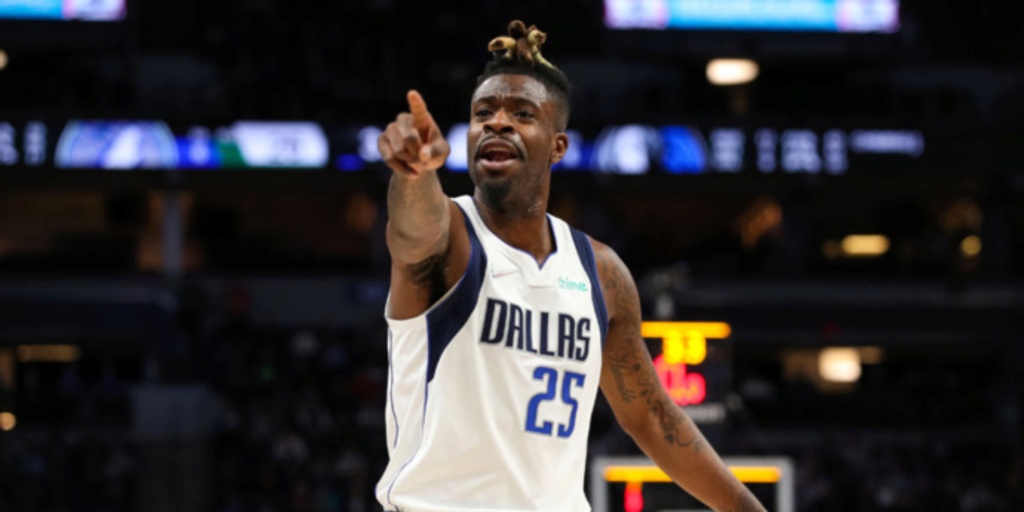 His smile lights up a room. Same with his laugh. His humble spirit and friendly demeanor can catch you off guard. He jams out to Lil Durk prior to taking to the court.

And oh yeah, he rocks the NBA’s toughest hairstyle.

But the 6-foot-6 veteran wingman is also a warrior. A fighter. A rough-rider. He’s a versatile defender, able to guard just about anyone on the floor. Leave him wide-open if you want, but that three-ball is likely going in.

Like his sports hero, the late, great Kobe Bryant, Bullock thrives on competition. So much so that when asked what is the best part about competing, he didn’t hesitate in his response: “Stopping that motherf***er!”

It’s that tough mentality that has helped Bullock find his rhythm on the court, solidified his role within a surging Dallas Mavericks team and aided in a resurgence of his professional career.

Since joining the Mavs last offseason, the 31-year-old Bullock has become a key role player. He's also become a starter for a Mavs team that has exceeded expectations. He has averaged 12.9 points and shot 39% from three-point range. Meanwhile, the Mavs have put up 50-plus wins for the first time since 2015, finishing the season at 52-30 and landing at fourth place in the Western Conference. They’ll have homecourt advantage for the first round of the playoffs, which begin Saturday against the Utah Jazz.

Bullock’s been an integral member of this Mavs team that zeroed in on players of his caliber when adding to the roster in the offseason.

“We definitely wanted to improve shooting, and then also versatility,” Mavs GM Nico Harrison said earlier in the season. “We wanted players that can play and defend multiple positions.”

Reggie Bullock hits the 3 to put the @dallasmavs up 2!

Bullock and his teammates have wholeheartedly bought into incoming coach Jason Kidd’s defense-first mindset. The team finished this season second in the NBA in fewest points allowed (104.7 points per game) and seventh in defensive rating (109.1). Last year, they finished 21st (112.3).

The chemistry Bullock provides, especially in the starting lineup, his reliability on both ends of the floor, his skilled ability to switch and his solid defense can’t be ignored. In fact, defenders have to play him so close, a gust of wind can barely blow between them. His, “I’m about to shoot” look and stance creates instant space for Luka Doncic and others to go straight into attack mode.

“I hang my hat on my defense. I take it personal,” he said earlier this year. “If a player scores on me, I try to do something different on the next play. I'm a competitive player, and I try to do anything I can to help this team on the offensive and defensive end.”

That said, Bullock struggled early in his Mavs tenure, which he equates with trying to find his rhythm and a sense of consistency with his shot.

“I went back and looked at shots I’ve been shooting since I've been in the league and shots that I shot over these past few seasons. It’s the same shot. It’s just all about not thinking about it and being confident when taking those shots.

“My advice to myself is to see it before it goes in,” he continued. “Just believe that I’m a great shooter and stay within my skillset.”

That advice seems to have paid off. Since January, he has found both his shot and the confidence to shoot it. This has resulted in success during several key games, including a record-setting one against the team they’ll face Saturday, the Utah Jazz.

In January, he came off the bench for one of his best games as a Maverick, scoring 23 points (including 6-of-8 from three-point range) en route to a 132-105 victory over the Indiana Pacers.

In the Mavs’ 110-108 victory over the Minnesota Timberwolves on March 21, Bullock started after missing four games for personal reasons and finished with 18 points on 6-of-11 shooting (all from three-point range) and 7 rebounds. Six days later, in the Mavs’ 114-100 victory over the Jazz, Bullock hit a season-high 7 threes, tying his previous best in scoring with 23 points (8-of-12 from the field, 7-of-11 from three), 4 rebounds, 1 assist and 1 steal in 35 minutes of action.  It was a performance that was right on time.

“Over the last two games, I was struggling from the three, but my team continued to give me confidence,” Bullock said after that game. “I believe I’m one of the best shooters in the league when my feet are set and I get arch on it at the same time. I just have to keep that confidence.”

Bullock’s shooting confidence, as well as his playoff experience, will be heavily relied upon starting Saturday.

In the 2021 NBA Playoffs for the New York Knicks, Bullock averaged playoff career-highs of 8.8 points, 3.4 rebounds, 1.2 assists and 32.4 minutes in five first-round starts against the Atlanta Hawks. Given his performance of late, he’ll likely put up better numbers than that, and the Mavs will gladly take it.

Meanwhile, as he prepares for the playoffs, Bullock reflects on landing in Dallas, reviving his career and playing alongside “one of the greatest players” in Doncic.

“It’s a great organization, great weather out here, the team is great," Bullock told BasketballNews.com in an exclusive interview. "It’s a pass-first team, we’re locked in on defense this year and we’ve got a great coach… It’s a great situation.”

The success the Mavs are having comes as no surprise to him.

“I expected this," he said. "This was my only reason for coming here, to be able to help make that next push for the team. We did well [in the regular season]. We just have to keep it going for the playoffs.”

Sharing the court with Doncic, whom he used to guard on opposing teams, has helped Bullock's resurgence.

“Luka is a great player, one of the best in the league," Bullock said. "You've always gotta keep your eyes on him, He’ll score the ball or pass the ball. He’ll tell you what you need to do better. He’s a young player, but he’s one of the greatest in the league.”

Selected No. 25 overall by the Los Angeles Clippers in the 2013 NBA Draft, Bullock has spent time with the Phoenix Suns, Detroit Pistons and Los Angeles Lakers, but playing for Dallas has been a great opportunity for him at this stage of his career.

“For sure, coming [to Dallas] has been great in my resurgence as a player in this league,” he said.

Off the court, Bullock uses his NBA platform to bring awareness to two issues that have affected him and his family deeply and personally: transgender awareness and gun violence.

On July 16, 2014, Bullock's sister Mia Henderson was found stabbed to death in an alley in West Baltimore. She was only 26 years old. Then, in October of 2019, his family experienced tragedy again when his younger sister, 22-year-old Keiosha, was shot and killed.

Since then, Bullock has been on a mission to keep their memories alive. He has done this by becoming a voice for the Black transgender community and getting involved with LGBTQ+ rights, as well as through efforts to fight gun violence.

NBA star Reggie Bullock is using his platform to fight for transgender equality after his sister was murdered pic.twitter.com/cU0sc7rgMM

His sisters would be so proud of the success he is having with the Mavs and would be grateful for the way he is speaking out in their memory.

“They would love everything I am doing for the organization, and they would love me just being able to tell their stories and using my platform to talk about the LGBQT+ community and gun violence," Bullock said.

“The platform that we have as athletes is important. A lot of people in the world know us, and it’s important just being able to use this platform for the right causes, standing up for what you believe in and using your platform in the right way.”

As he has found renewed success on the court with the Mavs, Bullock is now focusing and clearing his mind ahead of the playoffs. He’s also calling for help from all the MFFL’s while he’s at it.

“We need the city behind us, all the fans and all that fan support," he said. "We want to take care of business at home.”

And while you’re watching the game, watch for Bullock’s trademark braids to look a tad bit different: “I like vibrant colors, and they will be coming through in the playoffs.”

The fans can hardly wait.