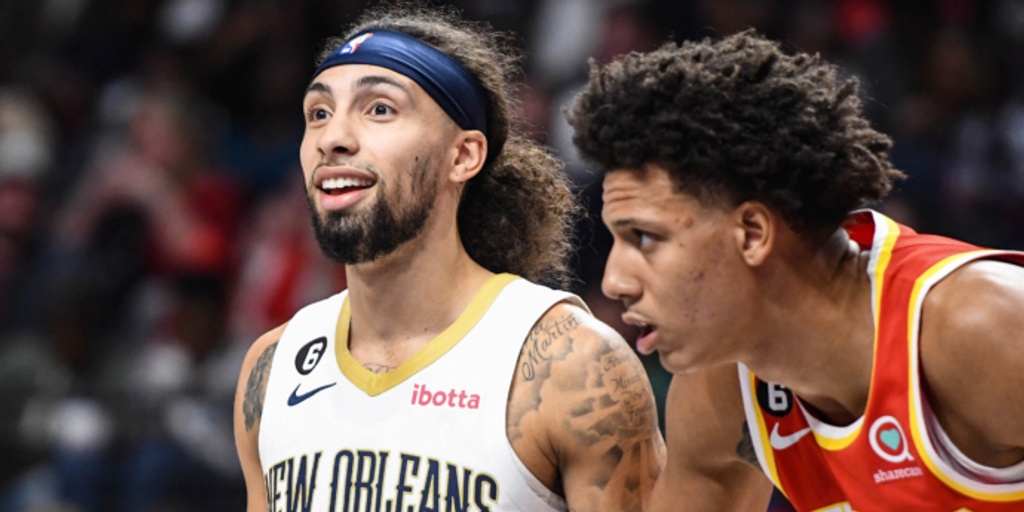 Jose Alvarado is a professional pest who’s terrific at getting under his opponent’s skin.

Before Alvarado and Murphy were teammates on the New Orleans Pelicans, they faced off against each other in college as ACC rivals.

“We can even throw it back to college when I used to play against him at Virginia. I hated playing against Jose; he was just so annoying. I couldn’t stand him,” Murphy told reporters recently. “Even my parents and my cousins couldn’t stand him. That just shows the type of player he was.

“And now [that] he’s on my team, I just love him to death. I love playing with Jose. He’s one of those players where you hate to play against him and love to have him on your team. Everybody needs one of those guys on the team.”

Alvarado spent four seasons at Georgia Tech, leading the Yellow Jackets to their first ACC title since 1993 and taking home the ACC Defensive Player of the Year award as a senior. But given his age (23 years old) and size (6-feet), he had a hard time standing out during the NBA pre-draft process and he ultimately went undrafted.

Alvarado was a pleasant surprise who emerged as a key contributor for New Orleans down the stretch. His playing time increased over the final 20 games of the season and he responded by averaging 8.2 points, 4.0 assists, 2.6 rebounds and 1.9 steals in roughly 20 minutes per game. The Pelicans rewarded his production by converting his deal into a standard four-year, $6.5 million contract in March.

However, Alvarado's true coming-out party was the 2021 NBA Playoffs. During the Pelicans' first-round series against the Phoenix Suns, he won over a ton of fans by being a pest and providing a ton of energy off of the bench.

Who was this fearless undrafted rookie who was stepping up on the NBA’s biggest stage, picking up Chris Paul full-court, getting his hands in the passing lanes and hitting clutch shots?

After his productive rookie campaign, Alvarado was determined to carry that momentum into the offseason. Throughout the summer, he focused on improving his confidence and consistency.

“I worked on just being more confident in myself from last year,” Alvarado explained. “I’m just learning and trying to be more consistent. I’m not the most athletic, so my floater and jump shot have to be there. It’s mostly about just locking in this whole season and being confident. My teammates always look for me and make my job easier.”

Alvarado knows that defenses are going to focus on Brandon Ingram, CJ McCollum and Zion Williamson this season, so he needs to knock down his open shots when those opportunities present themselves.

“It’s important for me and for my confidence. When I’m out there, I have to at least be a little bit of a threat,” Alvarado said. “When I’m out there with CJ, BI and Zion, they’re going to leave someone open, and they’re not going to leave them open. They’re going to see, and I’m going to make them pay. Me making shots will make them second guess and think that they can’t just leave me open. I just want to do my part as being a threat out there.”

It seems that Alvarado’s offseason training has paid off, as Pelicans head coach Willie Green has noticed a difference in his point guard. When asked about Alvarado’s improvement, Green raved about “his confidence” and added that “he has a great understanding of what we want [from him]… to come in and have a spark.”

The Pelicans are off to a 3-1 start, and their depth is a big reason for their early success. Against the Dallas Mavericks on Tuesday, New Orleans was without Ingram, Williamson and Herb Jones due to injuries, yet they still managed to win the game. Alvarado was one of eight Pelicans who scored in double figures, which tied a franchise record.

“Depth, depth, depth,” Larry Nance Jr. said after the Pelicans' win. “We were missing two guys who can go get you 30 on any given night in [Williamson] and [Ingram], and another guy who can keep you from getting 30 in Herb. We were missing a lot... This team has talent in abundance."

"Jose is hard to describe, but you just know he’s going to bring that passion and energy to the game that you would want to see from anybody,” Williamson told reporters recently. “He knows how to make himself a threat. Don’t let him fool y’all… He’s doing this off the bench. We have a special group.”