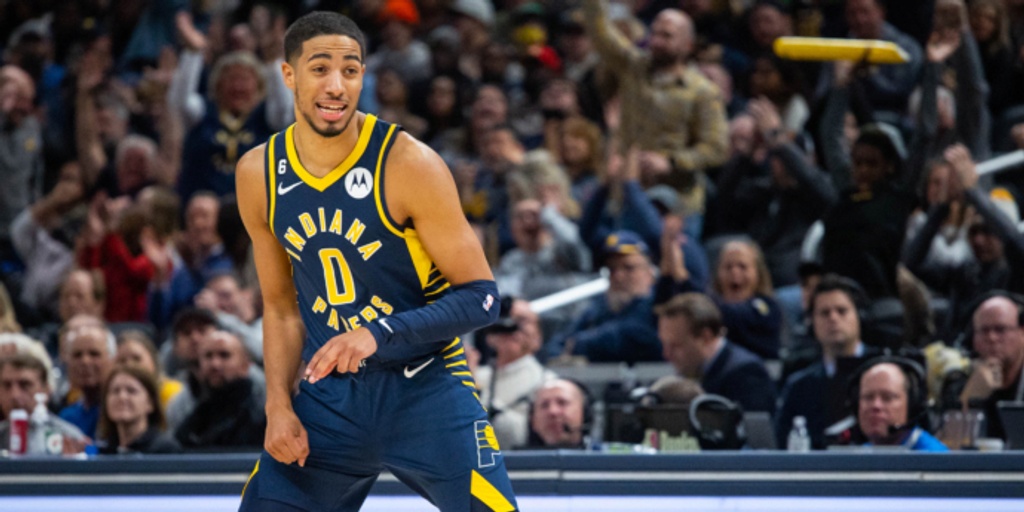 There were little to no expectations for the Indiana Pacers entering this season. Entering a new era headlined by emerging point guard Tyrese Haliburton, Indiana was a preseason favorite in the Victor Wembanyama derby. Instead, Indiana checks in with a 9-6 record, including wins in eight of their last 10 games.

With this early-season surge, the Pacers' young core is turning heads and it's clear that this team is just scratching the surface.

Haliburton is making the leap to All-Star candidate, averaging 20.6 points, 10.5 assists and 1.9 steals on an eye-opening 62.3% True Shooting. As the engine of Indiana’s offense, Haliburton has helped vault their offensive rating to No. 7 in the Association, averaging 114.0 points per 100 possessions.

The brilliance of Haliburton is his ability to elevate the numbers of everyone around him, which includes feeding Myles Turner consistently to a career-best in scoring (18.2 PPG). Incredibly enough, Indiana’s entire starting lineup, sans Jalen Smith, is shooting above 40% on three-point attempts with Haliburton as the trigger-puller.

Alongside Haliburton is the early Rookie-of-the-Year candidate, Bennedict Mathurin, who was picked No. 6 overall and may be a sleeper in the Sixth Man of the Year race as well. Mathurin instantly displayed his natural knack for scoring the basketball in a multitude of ways. Not only can Mathurin effortlessly slash to the rim, he can pull up with no hesitation thanks to beautiful shot mechanics. Mathurin’s perimeter prowess immediately translated too, as he's converting 42.7% on threes with adequate volume (5.9 3PA).

Eventually, Mathurin will move into a full-time role next to Haliburton in the Pacers’ starting unit, but being the featured piece off the bench has allowed for scoring binges at a rapid pace, including 18 points in one quarter. It’s hard to describe the “It” factor Mathurin possesses, but he oozes confidence. Based on early indications, the Pacers may have hit a grand slam drafting Mathurin, which could already be fast-tracking expectations in Indianapolis.

The word “rebuild” wasn’t thrown around much by the Pacers’ front office, as they viewed this as more of a multi-season re-tooling because they already had a few foundational pieces on the roster. Thanks in large part to this backcourt duo, Indiana currently sits in the No. 5 slot in the Eastern Conference.

Haliburton and Mathurin are creating fireworks for the Pacers’ offense, but there are also a few other surprises within this 15-game sample size. While Chris Duarte is sidelined due to an ankle injury, second-round pick Andrew Nembhard has been starting. Already, Nembhard has a veteran-like feel to his game with noticeable two-way versatility because of his consistent on-ball defense and three-point shooting. The former Gonzaga product more often than not is taking on the Pacers’ toughest defensive assignment, which speaks volumes to how much head coach Rick Carlisle trusts the rookie. In multi-man efficiency stats, combinations featuring Nembhard all rank near the top since he makes so many winning plays. On a rebuilding team, having a reliable piece like this could pay huge dividends down the road.

Because of the strong returns from the Pacers’ young core, career-best campaigns from Buddy Hield and Myles Turner are flying under the radar. Already possessing three first-round picks in the 2023 NBA Draft, Indiana could be in a very advantageous position to cash in once again between now and February’s trade deadline.

Turner is becoming a more reliable offensive threat coupled with his elite shot blocking, averaging 18.2 points, 8.9 rebounds and 3.0 blocks on 67.6% True Shooting. Meanwhile, Hield is putting up 18.0 points, 4.9 rebounds and 3.0 assists while shooting 40.3% on threes.

Following an offseason-long rumor mill pertaining to Turner and Hield potentially being traded to the Los Angeles Lakers for Russell Westbrook’s expiring contract, both of Indiana’s veteran leaders are thriving. And with their success in the win-loss column, the next month could be huge in deciding the long-term fate of both players in Indiana. If the Pacers maintain their strong start, this team all of a sudden could be looking like a play-in contender in the first year of their rebuilding efforts.

Simply put, the Pacers are too good to tank their way to a 20-win record. All of the following players for the Pacers have consistently flashed: Haliburton, Mathurin, Turner, Hield, Nembhard, Jalen Smith, Isaiah Jackson, Aaron Nesmith. Add in Duarte, who was one of the best scorers from the 2021 rookie class, and Indiana is one big offseason away from rebounding to consistent-playoff-threat status within the East.

When Indiana decided to ship off two-time All-Star Domantas Sabonis to the Sacramento Kings in exchange for Haliburton and Hield at last season’s trade deadline, it was a pivotal moment for the organization to reset. Putting a lid on expectations for the team for the next few years internally, this core instead may very well be ahead of schedule.

Don’t look now, but the Pacers are quickly becoming an NBA-League-Pass favorite because of their fast-paced brand of basketball. Also, they’re finding an identity on defense over their last 10 games, ranking No. 8 in defensive rating. Indiana ranks in the top-10 in offensive rating and defensive rating — only the Boston Celtics and Cleveland Cavaliers can say the same over that span.

Whichever direction the rest of the season takes for Indiana, the internal signs of growth are blindingly bright. Haliburton and Mathurin have immense potential as a complementary backcourt pairing, and it seems there are a number of players who could be involved in the Pacers' long-term vision.

Possessing oodles of cap space and multiple first-round picks, Indiana will be operating in the driver’s seat from a potential trade-negotiation standpoint over the next few months. Right now, the ship is certainly turned in the right direction for a franchise in search of consistent stabilization once more.