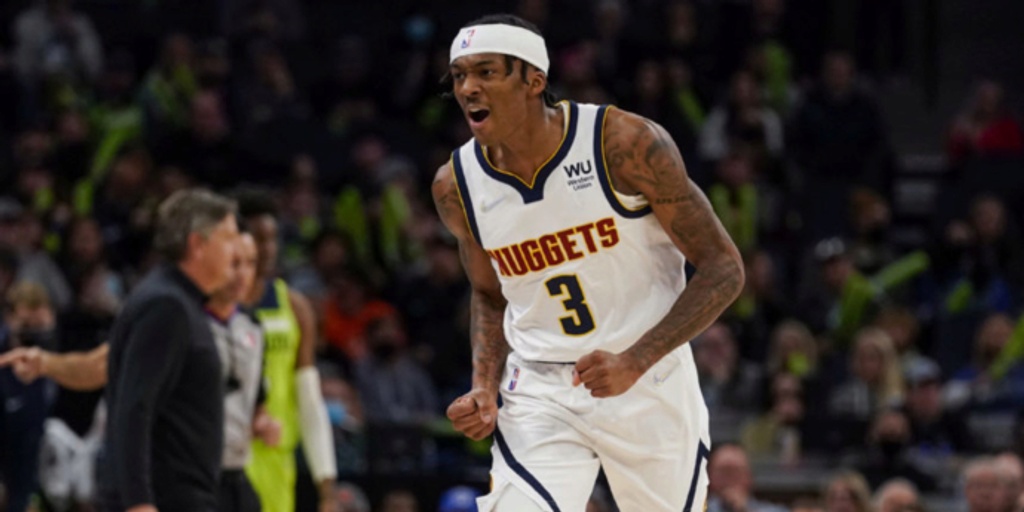 With his exciting style of play and big personality, it’s only a matter of time until Denver Nuggets rookie Bones Hyland becomes a fan favorite. He has already started winning over Denver’s fan base and soon, the 21-year-old will likely have fans across the country.

Hyland, the No. 26 pick in the 2021 NBA Draft, looks like a potential steal for the Nuggets based on the flashes he has shown so far this season.

With that said, you need to watch him play to fully appreciate the Bones Hyland experience. He pulls up from deep, crosses over opponents, dazzles in transition and hits stepback jumpers – all while talking trash, flexing at the crowd and pumping up everyone in the arena. And once he starts hitting shots and drawing defenders’ attention, he creates open shots for his teammates.

“That’s honestly what I do,” Hyland said when asked about winning over the fans in Denver. “I’m getting more and more comfortable being out there and, as you can see, I’m showing a lot more. But that’s what I do: I get the crowd involved. I’m a fan favorite, I can already tell that. That’s been me for my whole life! It’s just going to keep happening as the season goes along.”

Hyland doesn’t lack confidence – on or off the court. For example, he started some of his meetings at the NBA Draft Combine by rapping for the decision-makers in attendance.

“I rapped for some of the teams; I have some songs that I’ve made and I did a little snippet of those for them, and they loved it!” Hyland told BasketballNews.com in July. “Just right off the bat, from the rip, I was rapping. I ain’t shy. They just loved me, honestly.”

One of those teams was the Nuggets. Hyland said that he instantly felt a special connection with Denver’s coaches. Of all his Combine interviews, he said his meeting with the Nuggets went the best.

Hyland believes his ability to win people over and light up a room also makes him a great locker-room presence and leader.

“You know how on some teams, they’re with each other a little bit, but you can tell that there’s a little bit of animosity within them? I feel as though I can come in and be that middle man and make everyone get on the same page and get everyone to respect me,” Hyland said before the 2021 NBA Draft. “Even though I’m young, I’m wise beyond my years. They will listen to me and hear where I’m coming from, and I can help solve their problems... I’m big on building relationships.”

Where does Hyland’s unlimited confidence come from?

“Honestly, that confidence really came from, first of all, the man above – God gave it to me. But also it came from me trusting in my work,” Hyland told BasketballNews.com in July. “I’ve always lived by, 'Nobody works harder than me.' So, it came from that as well. I’m always ready for the moment. I’m never a step or two behind, I’m always three steps forward.”

Look at the moxie on this dude, Bones Hyland, a delightful player pic.twitter.com/o579vulvgj

As if Hyland wasn’t likeable enough, he also has one of the coolest names of any player in the league. While his first name is actually Nah’Shon, he’s been going by Bones since he was a kid.

In college, Hyland proved that he could create his own shot from just about anywhere – pulling up from well behind the three-point line, scoring at the rim despite being undersized and everything in between. And like Hyland said, he’s always been a fan favorite, and his two years at VCU were no exception. With his highlight plays and swagger, he was beloved.

During pre-draft workouts, he continued to display his ability to create instant offense, showing signs that he might eventually be the NBA’s next great sixth man if given the right opportunity. Hyland says he watches a lot of Jamal Crawford, Trae Young, Ja Morant and streetball legend Hot Sauce. At one point prior to the draft, he described himself as a better Jordan Clarkson.

“My game translates to the next level – more than a lot of these players in this draft class, honestly,” Hyland told BasketballNews.com in July. “I’m the type of kid who has the kind of scoring ability that a lot of teams need. I’m that spark. You see guys like J.C. (Jordan Clarkson) of the Jazz and a lot of guys like that; I have that kind of scoring ability, but I can score in many more ways and I can do many more things than just the things that he does.”

Hyland’s transition to the NBA has been pretty smooth, aside from a few rough outings where he struggled to knock down shots (which is to be expected for a rookie). As he continues to play more, he’s getting comfortable and developing chemistry with his teammates.

Hyland has impressed his teammates and coaches with his strong play and work ethic. After practices, he’s made a habit of sticking around and studying film with the assistant coaches. Nuggets head coach Michael Malone has praised Hyland during several postgame press conferences.

“My man Bones! ‘Let’s get Bizzy Bones!’” Malone exclaimed earlier this season. “He’s hitting big shots, talking to the crowd, getting the place going crazy… You can't measure a young man just by his physical stature. Bones has a really big heart, and I think that's why the fans have come to fall in love with him so early: He plays with a flash, but he also plays his heart out…

“Bones has extreme confidence, he shoots into a big basket and he’s not afraid, and I think that’s what the veteran players love about him. He’s talented, he’s young and he’s still a work in progress, but he competes, he’s not afraid and he’s got big balls. He’s gonna make big shots. How can you not, as a veteran, love a guy like that?!

“What I love about Bones is when he gets into the paint and gets around the basket, he is not forcing tough shots. He is finding guys. He is playing with poise beyond his years… The best thing about Bones is that the guy is so young and he’s only gonna get better. By game 82, he’ll be a different player than he is right now and that’s what really excites me.”

It certainly seems like the Nuggets found a diamond in the rough with the No. 26 pick in this year’s draft. And Hyland has a message for the teams that passed on him.

“They’re gonna regret it in the next few years,” Hyland said, “because I’m that golden child, I’m that gem.”