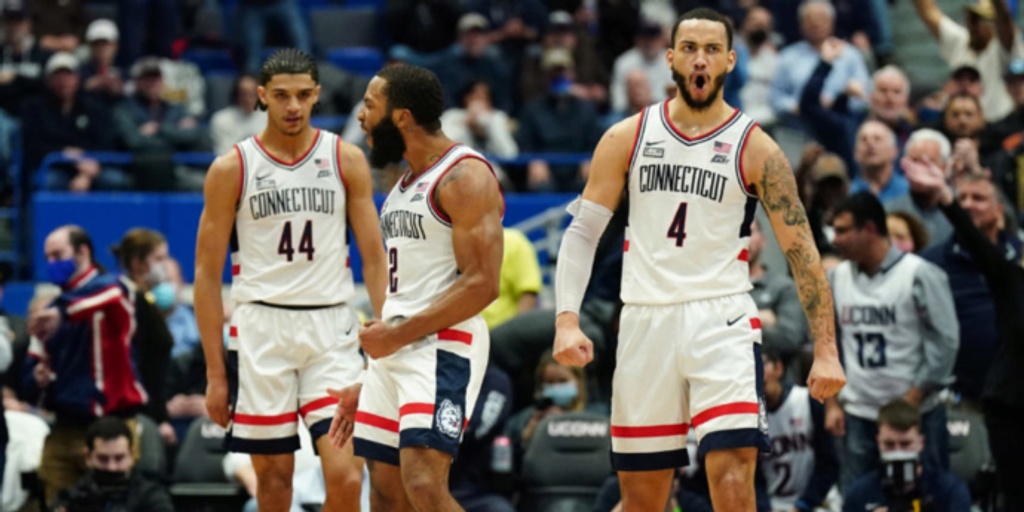 In a tremendous environment in Hartford, the No. 21 Connecticut Huskies defeated the No. 8 Villanova Wildcats 71-69 in a thriller. This was the Huskies' first win against Villanova since 2014. UConn sophomore Adama Sanogo led all players with 20 points, while senior Collin Gillespie scored 17 for the Wildcats.

The Wildcats (21-7, 14-4 Big East) entered this one having won five in a row, and have climbed to a No. 3 seed in the latest Bracketology projections. Led by Gillespie, their offense ranks sixth in the nation in Adjusted Efficiency, as they are on the heels of Providence for the top spot in the Big East standings.

The Huskies (20-7, 11-5 Big East) entered ranking fourth in conference play after winning their last three contests. They are 18th in the country in Overall Adjusted Efficiency behind tremendous play from RJ Cole and Sanogo. Cole, a Howard transfer, is averaging 16.2 points and 4.3 assists per game.

UConn started off hot, hitting 5 of its first 6 shots to jump out to a 12-6 lead, and not a soul in the arena was sitting down. Gillespie and Brandon Slater answered with some tough baskets for Nova on a 7-0 run to take a 20-19 lead at the 10-minute mark.

At 4:53, UConn head coach Dan Hurley was ejected for what seemed like merely pumping up the home crowd from the bench. The teams then traded buckets until the end of the half when the home team took a 33-32 lead into the break.

Sanogo led all players with 10 points, while Cole and Jermaine Samuels had 8 points each. Slater, Gillespie, Isaiah Whaley,and Justin Moore each had 7 points, as the teams both had a fairly balanced attack.

The Wildcats started quickly in the second half, as they jumped out to a 43-26 lead. Nova would steal the lead back at 7:55 when Gillespie connected on a triple to make it 56-54. At 2:56, the Wildcats extended the lead further on a Samuels three, making it 65-61.

Sanogo tied the game at 65-65 at 1:47 left, but then Gillespie and Slater knocked down some clutch free throws to take a 69-65 lead. Following a timeout, Tyler Polley hit a huge triple for the Huskies to bring it to 69-68. Cole quickly stole the ball away with 0:17 on the clock and called another timeout. Then, Cole drove the lane with power and hit a tough, off-balance layup with five seconds on the clock to take a 70-69 lead.

The Husky faithful lost their minds.

Gillespie took the inbound coast-to-coast, but was called for a charge with one second remaining. UConn connected on a free throw to make it 71-69, and the game was over from there.

Whaley finished with 13 points, and Tyrese Martin posted 9 points and 9 rebounds in the UConn win. Slater posted 15 points and Moore scored 12 for Villanova.

Connecticut currently projects as a No. 5 seed in the NCAA Tournament, but will likely see that rise next week with this huge win.

Villanova hosts No. 11 Providence on March 1.