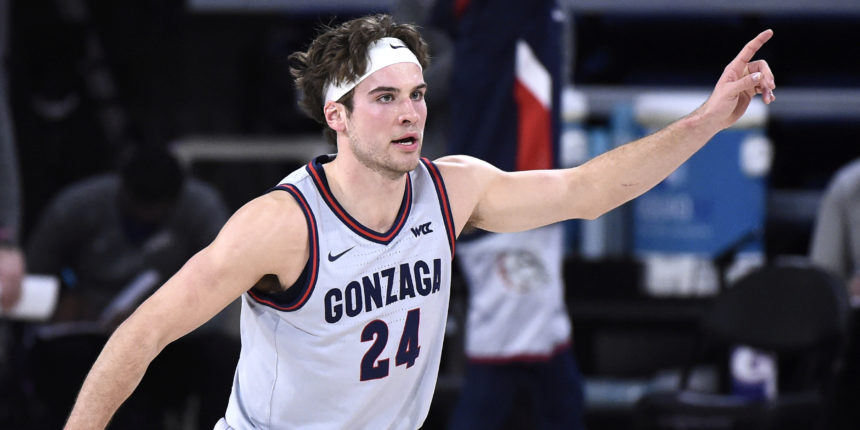 On a team that has been filled with players hailing from Japan all the way to Mali, it was a hometown kid from Washington that was the driving force for the Gonzaga Bulldogs this past season.

During his career in Spokane, Corey Kispert did not experience the same level of immediate success that players such as Jalen Suggs, or even Drew Timme, did. Kispert's ascent to being an All-American and a widely-considered first-round talent has been a methodical journey of consistent improvement. As Kispert has improved, so too has the Zags' record and performance, slowly accruing fewer losses each season.

A 4-star recruit from King’s High School in Edmunds, Washington, Kispert opted to play for Mark Few and Gonzaga over Washington, Virginia, and Notre Dame, amongst others. His recruiting process was relatively open and shut, as he quickly committed to the Bulldogs.

As a freshman, Kispert walked into a team loaded with future NBA and G League talent, featuring players like Rui Hachimura, Johnathan Williams and Killian Tillie. During his first season in Spokane, Kispert played an ancillary role that is nearly unrecognizable when compared to the one he played in the 2020-2021 season, as he was once simply a shooter and floor spacer. As a freshman, Kispert was afforded a plethora of playing time during the initial non-conference phase of the season. Through his first seven games, Corey played 28 minutes per outing, while starting in all of them. A minor ankle injury forced him out of a home game against Creighton, as well as a neutral site matchup with the future national champion Villanova Wildcats.

In his stead, fellow freshman Zach Norvell took his place in the starting lineup, a role that he did not give back, as he started the rest of the season. Kispert didn’t start a single game for the rest of the season and he only averaged 17.3 minutes per game during that span, a signifier of how fragile momentum is for a freshman’s playing time in college basketball. During his first year, Kispert took over 60% of his shots from beyond the arc, converting at a 35% clip, solidifying his role as a marksman for the Zags.

Coming into the 2018-2019 season, Kispert’s sophomore year, the departure of the veteran Williams would lead to Hachimura, a Japanese junior forward and future lottery pick, taking over as the team’s focal point; Zach Norvell also played a prominent role alongside San Jose State transfer Brandon Clarke. Kispert earned himself a role as a full-time starter to round out the Zags' starting five. His production dipped a touch, as his points and rebounds per 40 minutes decreased, but his three-point volume remained largely the same. Gonzaga registered a 30-3 record in the regular season heading into the NCAA tournament, where the Bulldogs made a run to the Elite Eight, eventually losing to national championship runner-up Texas Tech. In the tournament, Kispert averaged 6.5 points, 5 rebounds and 1 assist while shooting 40% from three-point range. Though his raw box score numbers were pedestrian, his spacing was crucial for Clarke and Hachimura to operate from the elbows and in.

A crucial part of Corey Kispert’s development came in the summer after his sophomore season, when he was able to work with fellow Washington native Joe Harris of the Brooklyn Nets, a player whom Kispert is frequently compared to by draft analysts. The shooter’s retreat in the pacific northwest afforded Kispert the opportunity to pick the brain of the NBA’s three-point leader on maintaining balance and footwork of shooting off movement.

The practice and advice definitely paid off, as during his junior season, Corey registered a 43.8% clip from three-point range, an improvement of over six percentage points from his sophomore year. In an early season matchup with Southern Miss in the Battle 4 Atlantis, Kispert cashed in on a then-career-high 7 made threes and tied his career high of 28 points. That performance sparked a hot streak, as Corey converted on 47% of his attempts from deep for the rest of the season. Kispert led Gonzaga, as the most important perimeter player, to a 31-2 record and the No. 2 spot in the AP polls.

As was the story with everyone in the country that year, Gonzaga’s season was cut short by the COVID-19 pandemic, setting up Kispert and the Bulldogs for what was to come up next: the fire storm-esque revenge tour in the 2020-21 that we all bore witness to.

The 2020-21 campaign saw Kispert average 18.6 points per game while shooting 44.0% from three-point range, leading the Zags to a near perfect season at 31-1, only losing to Baylor in the NCAA Championship game. Kispert’s performance for the season earned him West Coast Conference Player of the Year and Consensus All-American status, while simultaneously solidifying his stock as a first-round talent.

Corey Kispert is currently ranked #11 on the BasketballNews.com 2021 NBA Draft Big Board.