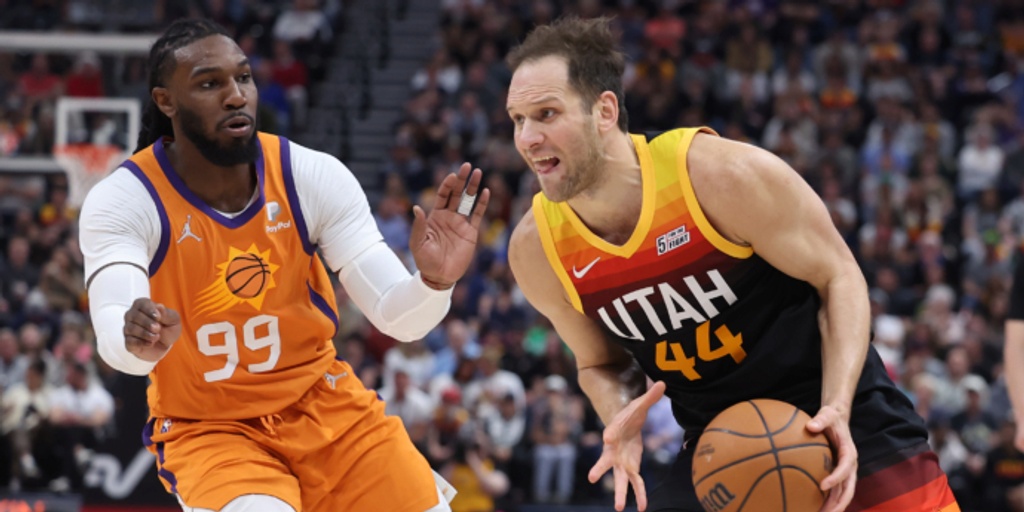 Following one of the most embarrassing postseason exits in recent memory, a blowout loss in Game 7 of the Western Conference semifinals against the Dallas Mavericks, the Phoenix Suns enter the 2022-23 season with arguably more questions than answers.

Deandre Ayton re-signed a max contract that was originally offered from the Indiana Pacers as a restricted free agent. Outside of that — including a failed Kevin Durant trade pursuit with the Brooklyn Nets ultimately keeping him around — Phoenix is reportedly still looking around for roster upgrades.

According to ESPN’s Brian Windhorst appearing Monday on NBA Today, the Suns are actively in trade discussions around the league — particularly dangling veteran forward Jae Crowder.

“They are very active in this last week conducting business,” Windhorst said. “They’re in trade negotiations right now. A lot of them are centered around Jae Crowder. Jae Crowder is a player who is available on the market right now.”

The Suns are in trade negotiations right now, mainly centered around Jae Crowder, per @WindhorstESPN. Bojan Bogdanovic is a potential target to monitor.

Crowder has played an integral role in the Suns’ meteoric rise, but their postseason failure showcased Phoenix’s lack of a consistent wing scoring option to flank Devin Booker, Chris Paul and Ayton. Far too often, Crowder’s outside shooting inconsistencies had a negative impact on the Suns’ disappointing postseason run.

Interestingly enough, Windhorst alluded to Utah Jazz wing Bojan Bogdanovic being a potential target to monitor for Phoenix. This isn’t the first time Bogdanovic has been linked to Phoenix this offseason, as Arizona Sports’ John Gambadoro initially reported the Suns called right after Donovan Mitchell was dealt to the Cleveland Cavaliers. Bogdanovic’s market right now is robust. as the Jazz continue their extensive roster teardown, per Windhorst, so there’s going to be some stiff competition in order for the Suns to pull this off.

.@Gambo987 reporting the Suns have interest in Bojan Bogdanovic: https://t.co/RJMWF479fC

The Athletic’s Shams Charania also reported last month that the Los Angeles Lakers had interesting in going after Bogdanovic too. Would the Suns be willing to cough up a protected first-round pick alongside Crowder and another salary (Dario Saric, Cameron Payne, Torrey Craig all would qualify as realistic candidates) to the Jazz?

Although moving Crowder would be a loss on the defensive end for Phoenix, Bogdanovic’s much-needed scoring boost would provide a necessary safety net in critical postseason situations. Mikal Bridges is an elite All-NBA defender, but his far-too-often passiveness has gotten in the way of being a consistent two-way player. Bogdanovic averaged 18.1 points on a 59.9% True Shooting percentage last season for the Jazz, who would have supreme amounts of space on the perimeter thanks to the presence of Phoenix’s stars. Bogdanovic shot 38.8% on catch-and-shoot threes for Utah in 2021-22, including an elite clip of 42.0% on opportunities from the corners.

Windhorst also suggests a long-term extension is on the horizon for Cameron Johnson, which connects to their interest in moving Crowder. As an ideal wing duo developing alongside their star backcourt, Bridges and Johnson figure to remain pivotal pieces to the Suns’ puzzle for years to come. One of Phoenix’s biggest draft hits under general manager James Jones, Johnson has developed into a consistent scoring presence with underrated aspects as an all-around player.

Sliding Crowder out in favor of Johnson — or in this case, potentially a more offense-first option in Bogdanovic as well — would be a win for Phoenix. From a pure spacing perspective, minutes with both Bogdanovic and Johnson would provide even more gravity for Paul and Booker to take full advantage of.

The window for the Suns is right now, especially as they try to capitalize on the remaining years left for their future Hall-of-Fame point guard in Paul, who will be 38 years old next postseason. As the Western Conference continues to get stronger, Phoenix must try to find advantages on the margins where they can.

Crowder played a big part of the puzzle for Phoenix, but there’s no denying the boon that would be provided with Johnson and Bogdanovic soaking up his minutes at the 4 spot.