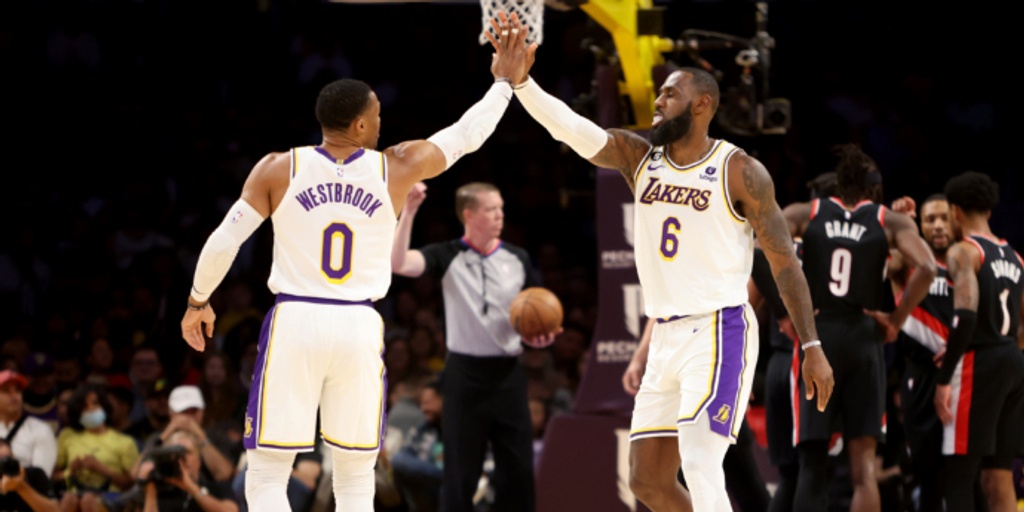 Despite an offseason failure, it's still not too late for the Lakers

Looking back to the summer of 2022, it was deemed a foregone conclusion that the Los Angeles Lakers would trade Russell Westbrook before the 2022-23 NBA season began. The team had just missed the playoffs for the second time since LeBron James came to L.A., and the trio of Westbrook, James and Anthony Davis just wasn't clicking on the floor.

So rumors flew as to where Westbrook would be shipped off to and the price the Lakers would have to pay to jettison his bulky $47 million contract. Just before the season started, it looked like a deal was going to happen. According to reports, the Indiana Pacers were going to send Myles Turner and Buddy Hield to the Lakers for Westbrook and their 2027 and 2029 first-round picks. The Lakers even pushed back a media session with vice president of basketball operations and general manager Rob Pelinka and new head coach Darvin Ham (perhaps because a deal was close?).

Then, it didn’t happen.

Now, more than halfway into the season, the Lakers are struggling again with a 20-25 record and sitting at the No. 13 position in the Western Conference. Davis once again suffered an injury that has cost him a big chunk of the season, and the team is still dreadful at shooting from three-point range.

Which begs the question: Did the Lakers wait too long to make a move or is there still hope to improve this roster?

Hindsight is always 20/20. Still, it would have been a smart gamble to take on Turner and Hield, even at that high cost. Turner has blossomed, averaging career-highs in points (17.1) and rebounds (7.8) while still being a force defensively around the rim, ranking third in the league in blocks (2.4). Hield has always been a knockdown, volume shooter, connecting on 40.0% of his shots from three-point range in his career and he has upped that to 42.4% this season.

It's understandable that the Lakers are cautious about making any major moves following the Westbrook trade that gutted their roster of shooting and defense — both obvious needs. It hasn’t totally backfired with Russ playing well in his role off the bench this season, but his bad decision-making and hero-ball ways in crunch time have cost the team at least a few wins.

Laker fans groan as Russel Westbrook isolates for 10 seconds and turns it over pic.twitter.com/Q5ucNN84Mp

As we’re seeing it play out now, Westbrook's contract should have been used to acquire multiple role players before the season. Even if that meant trading both of those precious future first-round picks, they should've gone for it if the right deal was on the table. Indiana wasn’t the only possible landing spot for Westbrook either, with Charlotte and San Antonio also showing some interest in the former MVP.

Imagine a Lakers squad that had proven role players to surround James and Davis. Well, we can. That’s the 2020 championship team that included the likes of Kyle Kuzma, Kentavious Caldwell-Pope and Danny Green. The formula is there, but the front office decided to blow it up.

Now the team has — again — banked on a roster filled with one-year players on prove-it, minimum-level deals. Sure, Dennis Schroder and Thomas Bryant have had moments, but both have come crashing down to earth over the past week. You can’t depend on those players to put up reliable stats all season long.

Imagine this team with real depth and even a little bit more shooting. Some of those close losses — and there have been plenty of them — could have been wins. They can handle it better when Davis has to miss games due to injury. (Unfortunately, that’s become a regular thing for him, especially over the past three seasons.) Maybe you could rest LeBron a little more and not put such a 36-minutes-per-game type of burden on his shoulders?

There’s a lot of "coulda, shoulda, woulda" with this Lakers season. But somehow, it’s not too late.

The Western Conference is still tight with only three-and-a-half games separating the No. 13 spot and the No. 5 spot. With this kind of parity, that means one good winning streak can bolt a team up the standings quickly.

LeBron is still playing at an incredible level. Austin Reaves and Lonnie Walker — arguably the team’s best role players — are close to a return after missing a few weeks. And Davis should be back before the end of January after being sidelined for over a month with a stress injury in his foot.

Their schedule is incredibly soft down the stretch. Starting March 1, 15 of their last 20 games are against teams that are currently at or below .500.  There are plenty of wins available to make the playoffs. That should be the goal: get in the playoffs and see what happens.

But the team needs more. It’s a seller’s market with teams holding sky-high prices for players they're open to moving (you can thank Minnesota and the Rudy Gobert trade for that). Those demands should come down a little as the Feb. 9 trade deadline gets closer.

There are moves to be made for the Lakers.

Turner might not be available, but Hield could be, especially considering all of young, talented shooters the Pacers have. Take on Daniel Theis and his salary, and something could be there.

Giving up one of those aforementioned first-rounders to Detroit for Bojan Bogdanovic, who is having a career-year, and backup big Nerlens Noel? Sure.

What about a package from the Hornets including Terry Rozier and PJ Washington? Rozier is owed $48 million over the next two seasons, but that could help with the price of getting a deal done. (Plus, Charlotte is reportedly set on a rebuild, per The Athletic.)

Yes, it would mean the Lakers would be giving up their projected $30 million in cap space this offseason, but it would behoove the team to do something with Westbrook now, since he is on the books for $47 million — a net of $17 million more would be available to use for players that L.A. could lose come summertime.

The clock is ticking. The season is more than halfway over.

Does this Lakers front office want to bank on this current roster and risk missing the playoffs yet again, or will they dive into the deep end of the pool? Time will tell.