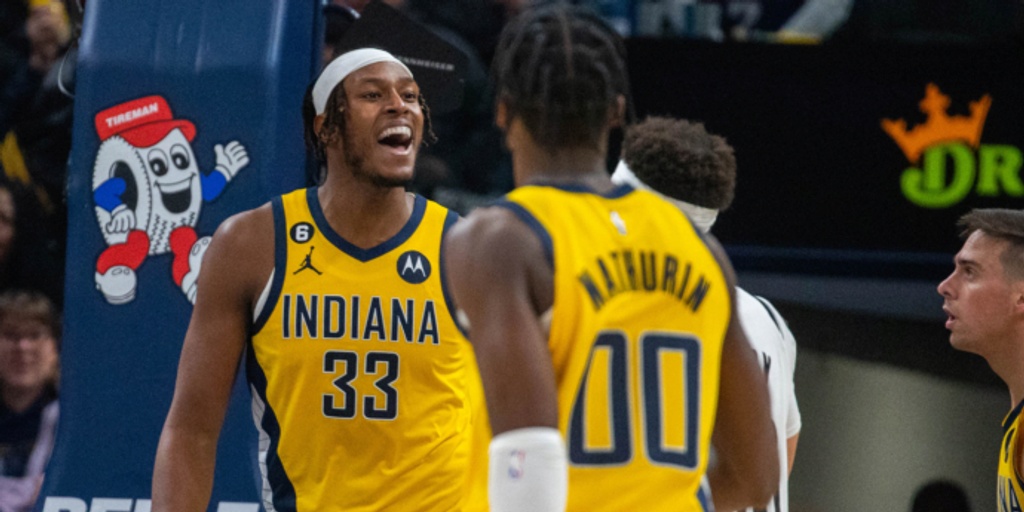 As we reach the quarter mark of the 2022-23 NBA season, gusting trade winds are right around the corner. In two weeks on Dec. 15, conversations around the league will kick into another gear, as many players who were acquired in the offseason will be allowed to be dealt elsewhere.

Which players stand out most as potential trade candidates over the next few months? Let’s take an early peek at some of the names that already have some steam behind them.

Off to the best start of his career, averaging 18.2 points, 8.1 rebounds and 2.6 blocks on a 68.8% True Shooting percentage, Turner’s trade stock will only rise heading toward February’s deadline. Always an underrated big man with elite rim-protection prowess, Turner becoming more of a consistent offensive focal point was the missing ingredient for years. Situation and usage played a big role in Turner’s roller-coaster scoring ways, but he’s now being fed by arguably the NBA’s best passing point guard.

Tyrese Haliburton is the perfect facilitator to showcase Turner’s modern skill set, which was relatively untapped as he was parked in the corner playing alongside Domantas Sabonis as a jumbo-sized 4. Now, Turner and Haliburton are creating dynamite in pick-and-roll situations. The former Texas Longhorn is scoring 1.30 points per possession as a roll man, and in 332 minutes together, the Haliburton-Turner duo carries a plus-4.5 Net Rating (113.9 Offensive Rating, 109.5 Defensive Rating) as well.

Indiana is in such an advantageous position following its surprisingly hot start. Already possessing three first-round picks in the 2023 NBA Draft, the Pacers could soon capitalize on a career-best running start from Turner.

How the Pacers fare on their extended west coast road trip will tell us whether this team is a legitimate Eastern Conference Play-In Tournament competitor or not, which ties right into the unsteady future of Turner and a fellow teammate...

Added to the Sabonis-Haliburton trade as salary filler, Hield has taken full advantage of the ultimate green light that Pacers head coach Rick Carlisle has given him. In 45 games thus far in Indiana, Hield is averaging 17.8 points and 3.9 assists per contest as a full-time starter. With only two years remaining on his contract, Hield’s three-point shooting expertise makes him a prime trade target for a multitude of teams.

With how the Pacers’ roster is currently constructed, Hield is getting in the way of both Bennedict Mathurin and Chris Duarte getting extended minutes. This hasn’t been a problem as of late with Duarte sitting out with a sprained ankle; however, beforehand, it was a jumbled mess trying to find the 2021 lottery pick consistent run behind Hield. As Mathurin headlines the Rookie of the Year race, allowing more minutes for the young core should be of the utmost importance here.

Although Indiana is off to a much better start than anyone expected, they are beating up on teams well below .500. As the schedules goes up another rung in toughness over the next few weeks, the Pacers' preseason expectations could average out. With the way Hield is playing, Indiana wouldn’t have to sell hard to find a taker.

The Pistons quietly put together a fantastic offseason to surround former No. 1 overall pick Cade Cunningham with the necessary pieces to create a feisty Play-In contender. Jaden Ivey and Jalen Duren were fantastic selections in this past summer's draft, but their late acquisition of Bogdanovic was a coup on value. Immediately, Bogdanovic paid dividends alongside Cunningham and Ivey as a floor-spacing stretch 4 who could put the ball on the floor. But now, with Cunningham’s shin injury feared to be potentially season-ending, Detroit is knee-deep in the Victor Wembanyama race, checking in with a 5-17 record.

Bogdanovic signed a two-year, $39.1 million extension less than two weeks into the regular season. However, the veteran is still immediately trade-eligible, instantly making him one of the most appealing transcational chips for a team needing an offensive jolt.

This is a clear example of the value of a high-level shooter alongside the Pistons' cornerstones.

Bojan Bogdanovic's ghost screen stresses the defense + opens up a driving lane for Jaden Ivey, who capitalizes on it. Complementary veterans are so crucial for rebuilding teams. pic.twitter.com/VY4gJcJ5Zq

Another player off to a career-best start statistically — 20.6 points on a 63.3% True Shooting percentage — the Pistons are in the ideal position to sell as high as possible. Bogdanovic should be able to net either a protected first-round pick or an appealing young prospect. Plenty of teams reportedly showed interest in Bogdanovic before he was traded to the Pistons, including the Los Angeles Lakers and the Phoenix Suns.

Don’t be surprised when the Pistons open the phone lines again. Committing to the Wembanyama race makes the most sense for any team leading the reverse standings right now.

If you had forgotten about the Crowder saga still ongoing in the Valley, nobody would blame you. After requesting a trade, reportedly due to Cameron Johnson earning his starting spot, Crowder is still away from the team as Phoenix searches for the best possible deal.

The Suns' original hope internally was to find a Crowder deal back in October, preferably before the regular season as head coach Monty Williams said. Instead, the market is telling Phoenix there are not many takers for the 32-year-old wing. The Athletic’s Shams Charania mentioned the Milwaukee Bucks and Atlanta Hawks as potential suitors for Crowder since his request.

Johnson suffered a torn meniscus a few weeks back that will sideline him for another month at least. That has to bring some sort of urgency to the Western Conference-leading Suns. Even with no Crowder and Johnson out for a good chunk of the season, Phoenix is still firing on all cylinders with one reliable wing in ironman Mikal Bridges. Also, incredibly enough, the Suns' offense hasn’t fallen off at all with Chris Paul watching as a spectator because of a nagging heel injury.

Eventually, Phoenix must make a win-now move by utilizing Crowder’s $10 million salary. If the Suns want to make an even more aggressive push, they can attach Dario Saric’s expiring contract alongside Crowder, which would allow them to bring back close to $25 million in salary. Charania reported the Suns have had exploratory talks around Crowder for Atlanta’s John Collins, Washington’s Kyle Kuzma, Sacramento’s Harrison Barnes and Houston’s KJ Martin.

There appears to be little traction right now, but keep an eye on this Crowder situation eventually reaching a resolution. Once the Suns are back to full health, they will stay right near the top of the West.

Even more names and teams will continue to pop up between now and Dec. 15, but silly season in the NBA is starting to appear on the horizon. How some of these aforementioned teams operate will go a long way toward deciding how active this deadline period could soon become.