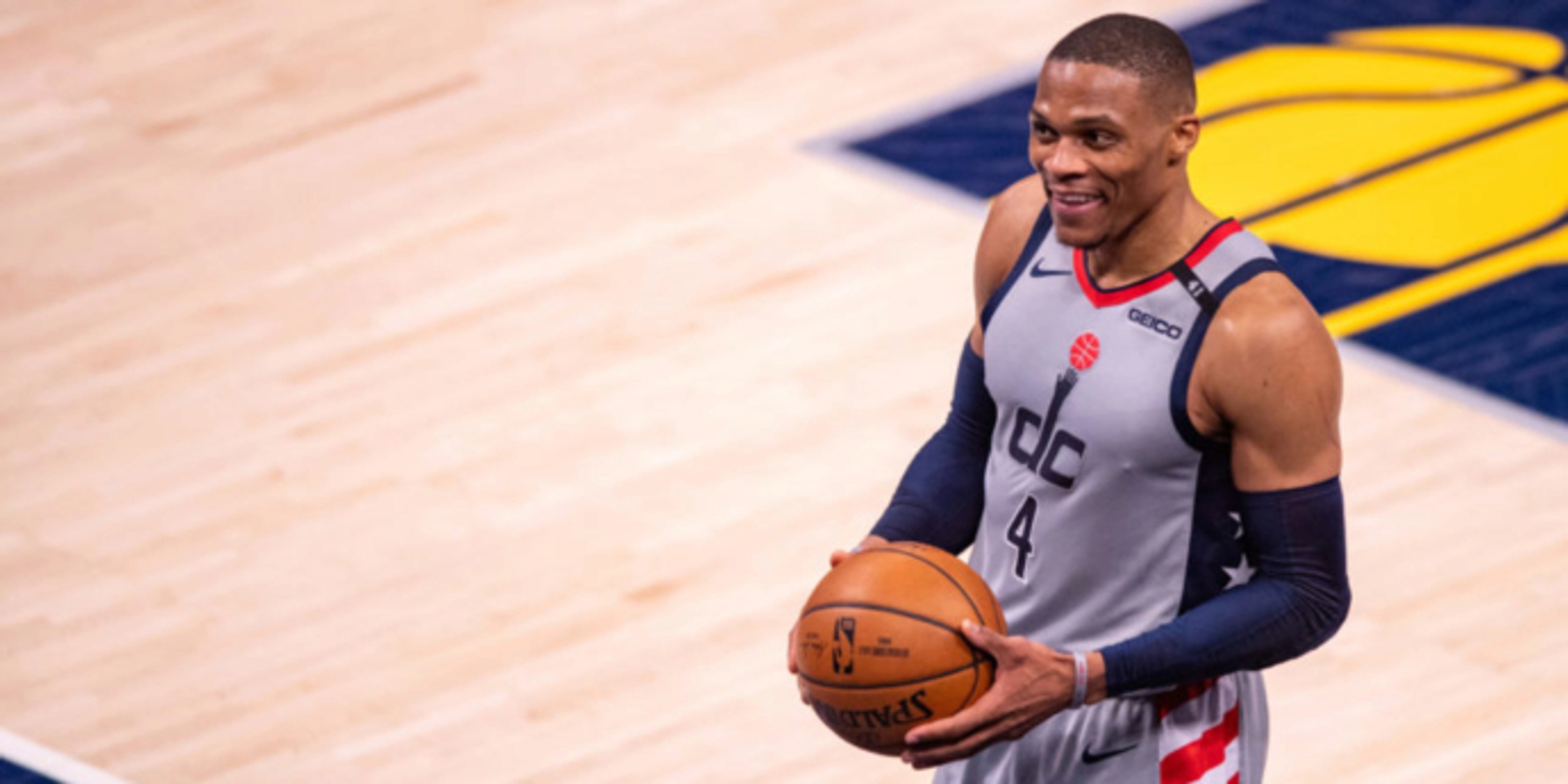 For 13 years, Russell Westbrook has been honoring his gift but now, that gift is honoring him with a slice of NBA immortality.

He flies above the Atlanta Hawks’ bigs in the paint and grabs the rebound away, daring anyone to come within inches as he burns up the length of the court for a layup. In that moment, he recorded his 182nd triple-double, breaking Oscar Robertson's record for career triple-doubles.

In many ways, breaking Robertson’s record in this manner suits the man known as The Brodie. Relentless. Ruthless. Fighting and scrapping like hell to get what’s his.

As Westbrook snagged that 10th rebound to rewrite NBA history, the fight for how he’s viewed raged on. On one hand, Westbrook’s teammates and peers around the league know the deal: he is still a force in the game who just accomplished what was supposedly impossible for 47 years. On the other hand, fans and media pundits continue to criticize Westbrook regardless of his achievements.

This is Russell Westbrook in all of his paradoxical essence. His records, triple-doubles and impact on the game are undeniable. But for myriad reasons, his contributions are poorly received and taken for granted. At times, he's just plain disrespected and unappreciated.

The Art of The Triple-Double

When it comes to Westbrook’s triple-doubles, some critics think that his feats are overrated, citing how easy it is to score in today’s NBA (among other things). Regardless of era, there is nothing easy about recording a triple-double over the course of a game, let alone averaging one for four seasons. Westbrook might make it look effortless due to his athleticism, but the difficulty remains.

Triple-doubles have a sequence and order to them. Westbrook's teams have won more than 75% of the games in which he has recorded triple-double, which means his actions have to make sense and coincide with what his team specifically needs during different points of a game. For example, the priority at one point could be setting the table for others and putting them in position to attack defenses and score. At others, it could be taking over the game with his scoring, or crashing the glass for second-chance opportunities. Westbrook has found sequences that work for him and that allow him to thrive regardless of the situation or flow of the game.

Recording triple-double after triple-double would be extremely difficult for any player, but Westbrook’s size makes it even tougher. He is 6-foot-3 and despite his physique, many of his opponents have a significant weight advantage over him (especially when he battles bigs for rebounds). Currently, Westbrook has the most boards for a guard 6-foot-3 and under. The price that he’s paid for those rebounds and his hustling night after night? Injuries, treatment, and maintenance. Years ago, Westbrook had multiple surgeries and procedures on his right knee. Earlier this season, Westbrook reportedly suffered a torn quad.

And he’d go through it all again for the sake of the team.

“I honestly make sure that I impact the game in many ways, every night,” Westbrook said. “Defending, rebounding, passing, assists -- whatever it is that my team needs from me to be able to win.”

Wizards rookie guard Cassius Winston believes that Westbrook’s style may be polarizing because of its no-frills approach.

“I think people don’t really take into account how hard it is to do what he does because he doesn’t really shoot jump shots as much or shoot threes [or do] the flashy stuff that people want to see to showcase a skill set,” Winston said. “That’s what people like to see, the flashy stuff, the tricky moves, the difficult layups, all those type of things whereas Russ goes out there and gets it done. That’s the object of the game. He goes out there and gets it done, and he does it every single night to a level that nobody has ever done. People don’t want to take into account how difficult it is to average a triple-double.

"People go their whole careers without getting a triple-double -- without coming close to a triple-double, without having their hand in that much of the game. And he goes out there and does it every night. Instead of people supporting that and giving him his flowers and realizing how difficult that is to do, people always want to analyze it and look at all the little things… the flashy things.”

Winston also believes that since Westbrook makes his triple-doubles look effortless, it’s easy for people to take what he’s doing for granted.

“When you see somebody do it and do it consistently and do it effortlessly, it’s kind of like you have to pick it apart like, ‘How is he making it happen?’ When things look too easy, people don't really appreciate it," Winston said. "When things are easy for somebody or because they make it look easy, they don’t appreciate that this is very difficult to do. Not a lot of people can just go out there and do it, and you gotta respect that. No matter how you want to flip it, spin it, or say it, you gotta respect that the man gets a triple-double every night. I’m pretty sure a lot of people wish they could do that.”

When Westbrook notches a triple-double, his teams are 137-46. His triple-doubles are also a huge reason why the Washington Wizards have been surging and just clinched a spot in the play-in tournament.

It isn’t just Westbrook’s play that’s considered polarizing, it’s his "demeanor." However, when you consider his approach to the game, should it be? On the court, Westbrook is relentless; he's always going to compete and hustle. He busts his a** (and your’s too) so that his team is in position to win games. Off the court, he turns that fire and intensity off and goes about his business.

Wizards head coach Scott Brooks also coached Westbrook in Oklahoma City for seven seasons, and he is in awe of his star player’s evolution as a player and as a man.

As a player, Brooks has seen the work that Westbrook puts in.

“It’s been awesome to watch him become the player and the man that he is. [It's] a lot of work. This doesn’t just happen because he was born with a lot of great athleticism," Brooks said. This guy, he works. He works on the craft. He loves the game. He’s passionate about it. He’s a student of the game, but I’ve seen so much improvement from him as a player. As a person, as a leader, it’s just been so great to see. And he cares. He’s been at it for 13 years now at a high level.

“You never have to worry about Russell. Never. Every day off, I’m almost like, ‘Russell, please take a day off. You don’t need to come in and get your 20 minutes of shots and your treatment. You can rest your mind.' But he doesn’t. He’s locked in, and I think that’s going to help him play to whenever he wants to play.”

As a man, Brooks is impressed with how Westbrook conducts himself with his family, his off-court projects and his teammates.

“He does incredible work off the court. He’s a great role model. He’s a great father, husband, brother, son. He does a lot of great things and, for some reason, that doesn’t always match up to the narrative that’s out there," Brooks said. "I think everybody should appreciate all the things that he brings and the talent he has and the energy and the effort that he brings every night. That’s what everybody should be focused on.

“We all know what sells. We’ve been hearing about it since I came into the league. Negativity sells," he added. "And sometimes when you don’t want to do a deep dive, [you'll] take someone else’s opinion and continue to re-write what you’ve heard and what you’ve read. I think that’s a mistake by the parties that do that."

“He has been great [as a mentor],” Winston shared. “He has taught a lot of mindset things… putting yourself in the right mindset to be successful. Believing in yourself. Betting on yourself. Focusing on the things that you need to focus on. To not worry about the things that you can’t control, and if you want to do this, you got to bring it every day. That’s what separates you. That’s what makes you different. That’s what makes you successful. If you go out there and consistently do whatever it is you do -- whatever it is that you’re good at -- make sure you bring it every single time.”

When it comes to how Westbrook is perceived by outsiders, Winston never paid those any mind as a fan. Now, as his teammate, the level of respect he has for Westbrook has only skyrocketed.

“From the outside looking in, I always thought he was a really good teammate," Winston said. "I admire guys who go out there and give their all every night. And being a player who wants to play hard and wants to try to play their best every night, you see guys like that do it and you’re like, ‘That’s impressive.' I've always been the kind of guy that just admires that from a standpoint of him being a teammate and somebody to look up to in that way.

“And then when I got here, I realized how much of a good guy he was, and how supportive he is of his teammates. How much he’s encouraging, how much he’s trying to help. How much energy he brings to a team. Like the first day he got into practice, he just changed the whole energy of the gym. You don’t really know that about him from the outside looking in until you’re actually on his team.”

Russell Westbrook’s gift took years for him to develop, nurture, refine, and master. It has catapulted him onto multiple pages of the NBA record book. Whether he's loved or hated, Westbrook did it all his way without yielding or compromising.