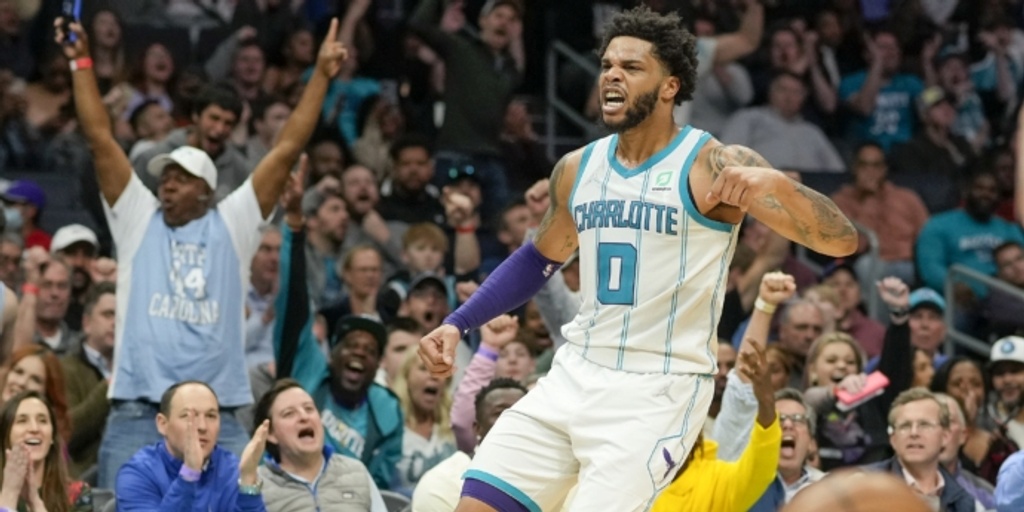 Although the Charlotte Hornets are publicly stating their willingness to do whatever it takes to re-sign Miles Bridges, free agency always presents interesting situations on the fly. Charlotte could see such a curveball with Bridges, a restricted free agent who had yet another breakout campaign, averaging 20.2 points, 7.0 rebounds and 3.8 assists per contest on a 59.3% True Shooting percentage.

Will the Hornets actually be comfortable dipping their toes near the luxury tax waters? Over the years, most notably in the Kemba Walker saga, Charlotte has been notoriously frugal. If a team makes an aggressive push for Bridges that makes Charlotte uncomfortable, I will be very curious to see how they operate in the short term.

Let’s further explore scenarios where Bridges could bolt on the Hornets.

As far as the best potential fits for Bridges away from LaMelo Ball and the Hornets, Indiana immediately comes to mind as a similar situation. Tyrese Haliburton is one of the best young playmakers in the league, and he would be able to consistently set up Bridges as a top-flight scorer in transition. Bridges and Bennedict Mathurin is also a fun, score-first combination to envision in Indiana.

All of a sudden, the Pacers would become a very enticing team with Bridges aboard. If everything were to click together, Indiana’s starting lineup could help create some Play-In Tournament buzz immediately with a quintet of Haliburton, Mathurin, Chris Duarte, Bridges and Myles Turner.

According to Cleaning The Glass, Indiana can create upwards of $29 million in cap space with relative ease, and in turn, make the Hornets sweat early on with an offer that approaches its max-allotted space. What about throwing Bridges an offer sheet at $115 million over four years? With the salary cap going up, this deal wouldn’t impede much on Indiana’s long-term trajectory. And from an on-court fit, Bridges would be excellent, and should address a serious concern on the wing in Indiana.

Although it may seem unlikely Bridges leaves Charlotte this week, the Pacers are the one team I would keep my eye on in pursuit of him.

Thanks to the recent additions of Nerlens Noel and Alec Burks, Detroit is no longer a serious threat to sign either Bridges or Deandre Ayton in restricted free agency at the moment. But that could quickly change with one trade that sheds Kelly Olynyk’s salary. Moving Olynyk would open max-level room once more for Detroit to make an aggressive push to accelerate its young core's growth.

Alongside Cade Cunningham, similarly to Ball and Haliburton, Bridges would be consistently fed and convert those opportunities with efficiency. Also, Bridges wouldn’t need to have a lot of the scoring load on his shoulders thanks to the presence of Cunningham and No. 5 overall pick Jaden Ivey.

The Pistons’ core with Bridges added into the mix becomes a fun team to monitor over the next few years. Cuningham and Ivey as the lead ball-handlers, with the yin-yang wing combination of Bridges and Saddiq Bey sounds like pure perfection.

Bridges, a Michigan native, would certainly welcome a homecoming opportunity for the right price as well.

The Spurs seem very intent on the tanking path following their blockbuster trade that sent Dejounte Murray to the Atlanta Hawks on Wednesday. Would pursuing Bridges on a near-max salary really make sense on their new timeline? It’s unlikely, but this is where finding potential fits for Bridges outside of Charlotte becomes difficult.

Bridges would certainly get his looks as the No. 1 option in San Antonio, but I don’t see why either side would pursue this potential free-agent partnership. Expect to see San Antonio linked to a lot of players over the next week thanks to its immense amounts of cap space now available.

In the end, I would wager on Bridges returning to the Hornets on a new lucrative multi-year deal. However, we’ve seen crazier things happen in the NBA at this time of the year.

Wherever Bridges eventually lands, his scoring will be well coveted in a wing-first league nowadays.