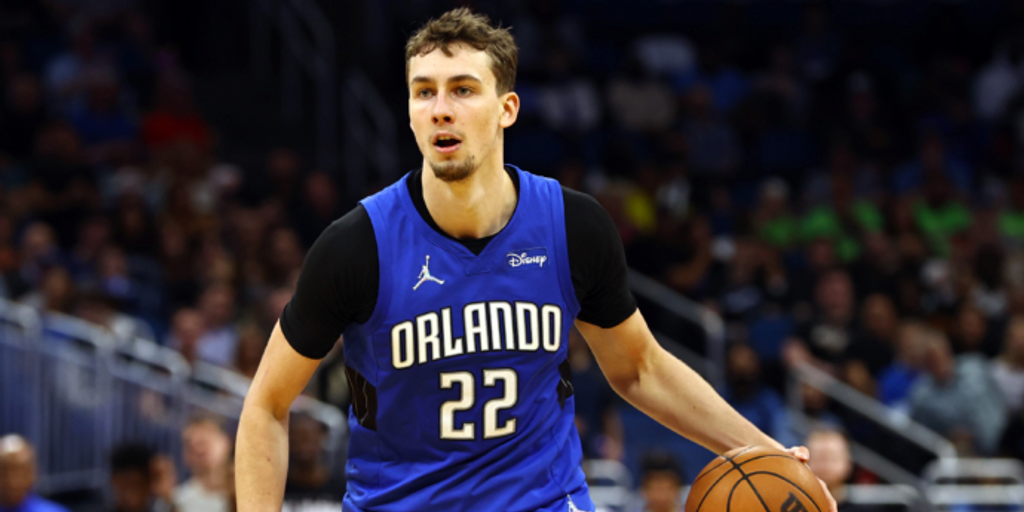 Last Thursday, the German men's national team retired Dirk Nowitzki's No. 14 jersey ahead of its opening game of EuroBasket 2022.

It was only fitting that Nowitzki has since viewed the future of German hoops up close.

Franz Wagner, who turned 21 years old just five days prior, hasn't had the most consistent EuroBasket breakout. But his big games have been monumental for 3-1 Germany, who is currently in a three-way tie atop a loaded Group B as of Wednesday morning in the U.S.

Nowitzki had glowing praise for the young forward after his 32-point outburst against Lithuania:

“He has a great all-around game. He can shoot, for a big guy he handles P&Rs, he reads situations. He’s a tough competitor. He’s faster and more athletic than he looks.” pic.twitter.com/iLWfBgVKEU

In a thrilling 109-107 win for Germany, Wagner flexed his creativity off the dribble from his opening bucket:

Here, Wagner wants to attack Jonas Valanciunas in his drop coverage, but  Rokas Giedraitis wants to force him left and away from the Daniel Theis screen. So Wagner gets him moving with a few dribbles, allowing Theis to flip his screen and turn the coverage into an advantage. Once Wagner gets to the open space, he puts Valanciunas on his heels by faking a crossover, and then, finishes strong at the rim.

Throughout this contest, Wagner read Lithuania's defensive coverages like a Magic Treehouse book. He shot 4-for-7 from long range, with three of those triples being impressive pull-ups where Wagner took advantage of Lithuania's conservative approach.

Lithuania mostly played in drop coverage, but even when Valanciunas or Domantas Sabonis played closer to the level of Germany's screens, they didn't want to come all the way out to guard the perimeter players. Wagner took advantage of this with high ball-screens; the screeners also either slipped or tried to wall off Wagner's initial defender to place more pressure on the screening defender. Once that happened, it was on Wagner to seek out his shot against the mismatch. He did with some confident threes.

As a rookie, Wagner shot 32.4% on pull-up three-pointers, per Second Spectrum. That looks pretty poor at first glance, but it ranked 64th out of 105 players who logged at least 75 such attempts last season — a tad under the league average. In his nine offseason games with Germany (spanning EuroBasket, FIBA World Cup qualifiers and friendlies), Wagner is 9-for-21(42.9%) on pull-up threes. Obviously, that's a tiny sample size on a different team, but it's certainly a positive.

The at-rim scoring growth, however, is where Wagner can really build some momentum. This was one of the crazier stats I've seen over the summer, and it placed a rookie among some of the premier driving threats in the entire league:

That was amazingly 7th among all NBA players (!!) and it made up almost half of his total attempts.

Wagner made 60% of his total shots within four feet of the basket, according to Cleaning the Glass, and that ranked in the 24th percentile at his position. The above 47% finishing rate shows he particularly needs to improve if he's going to collapse defenses with the Orlando Magic.

So far, that hasn't happened much in the nine summer games for Germany. Per InStat, Wagner has made 13 of 27 driving shot attempts. He's still learning how to absorb and finish through contact, and he's not an explosive, vertical threat at the rim. When he has a straight line drive towards a bruising center, Wagner can speed to the rim, but his balance and touch get altered more easily than one would hope.

However, he can make up for the lack of strength with some real creativity as a ball-handler and finisher.

How about a non-dominant-hand hook shot spinning off of a pivot? That's nice. And while people don't usually love the off-hand layup finishes, these are a way to use length and touch creatively to get past contests.

With Wagner, the remaining EuroBasket games are all about watching his attacking consistency and his ability to deal with contact as a driver. He's put up three 20-plus-point performances in these nine summer contests — and three duds where he scored in single digits. To be fair, Wagner isn't the clear-cut catalyst for Germany; the team typically gets things started with Dennis Schroder.

But Wagner has given fans in Europe and the United States some real threats of dominance. If he continues to improve his court vision as an initiator, and builds up his functional strength, he could be a dangerous three-level NBA scorer sooner than most expect.