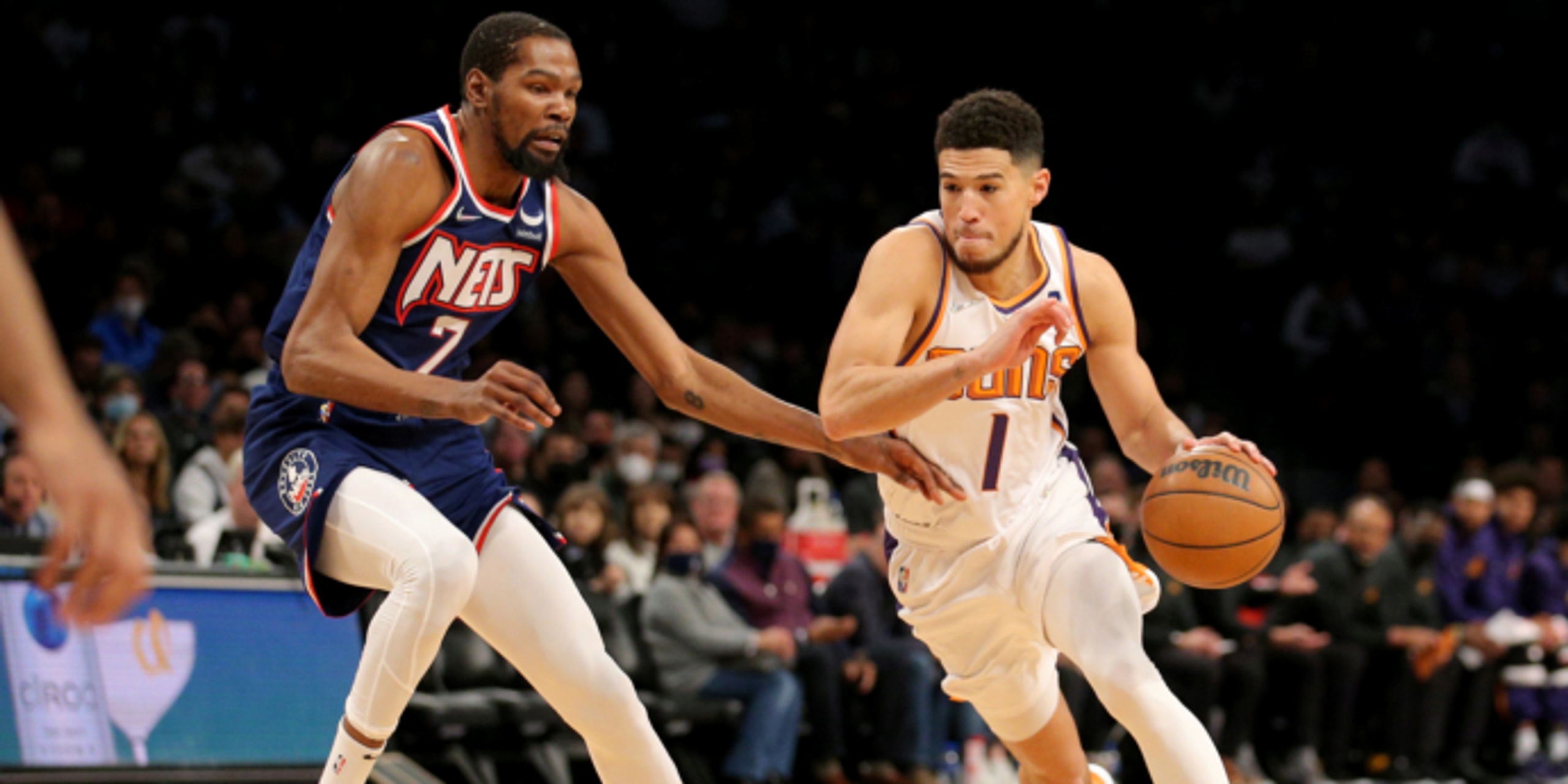 Hours before the 2022-23 league year began, one of the greatest players in NBA history dropped a bombshell.

Kevin Durant officially requested a trade from the Brooklyn Nets on Thursday, signaling that massive changes are coming for the organization. It appears that Durant is done dealing with the sinking ship in Brooklyn, spearheaded by the melodrama consistently surrounding his fellow superstar teammate Kyrie Irving. In the next chapter of his career, it feels as if Durant seeks to be part of an organization where he can settle into a situation and win, aging gracefully in the process.

Even with Durant turning 34 years old at the start of next season, and being just two years removed from a torn Achilles, teams are lining up to offer a package for this transcendent, franchise-changing player. Somehow, despite suffering what is usually a career-altering injury for most, especially high-usage superstars, Durant has looked like himself — and maybe better.

According to Yahoo Sports’ Chris Haynes, Durant’s preferred destination is in Arizona with the Phoenix Suns. As ESPN’s Brian Windhorst alluded to, Durant asked out hours before the start of free agency to help the Suns in potential Deandre Ayton sign-and-trade discussions. This was a calculated move on Durant's part, and he's had the Suns circled target as his top landing spot. From Durant’s perspective, having Phoenix as his No. 1 choice makes too much sense from multiple angles.

First, Durant views Devin Booker as one of the best young players in the NBA. For years, Durant has been impressed with Booker from afar. And as the young star continues to develop into a bona fide top-15 player in the NBA, Durant’s praise has been heard every step of the way.

Only a few short months ago, Durant spoke glowingly about Booker’s game on JJ Redick’s podcast, "The Old Man and The Three."

“He just has a pretty game for one, but I just think he’s really mastering who he is right now," Durant said of Booker. "He’s figuring it out, like how to play at an elite level but still win, because he was always scoring the ball. But he knows how to win.”

Kevin Durant a few months ago talking about Devin Booker on @OldManAndThree: pic.twitter.com/AtvP0QbpSw

Durant and Booker have long had a mutual admiration for one another, but their bond began to blossom back in 2019 when both were in Las Vegas with Team USA.

A few years ago, a young, star-struck Booker told me that Durant was the one who approached him about wanting to develop their relationship even further.

“It’s pretty well, we’re just fans of basketball,” Booker told me in 2020 about his relationship with Durant. “When you love the game and watch somebody with that much skill on both ends of the floor, you just have immediate respect for him. So, at USA [camp], he came to me like, ‘Let’s play one-on-one. We have always been at a distance... Keep going, you know, your game is really solid.’ And having that chance to interact with each other then, develop the relationship even more [was great]. One of my favorite players in the league to watch from a skill-set standpoint. He has it all.”

Booker grew up idolizing Durant. (He even had a Fathead of the future Hall-of-Famer on his wall growing up.) Fast-forward to now, and this could be a full-circle moment for the 25-year-old All-Star; one of his idols seeking him out and wanting to play alongside him. Durant and Booker could be basketball nirvana on the court, but this relationship is also already one that's featured immense mutual respect for years.

Another reason Durant prefers the Suns is head coach Monty Williams, who coached KD for a short stint with the Oklahoma City Thunder as a lead assistant, plus he had multiple interactions with him during Team USA activities.

And the cherry on top? Chris Paul's elite point guard skills in setting up the offense.

Everything Durant craves is available to him in Phoenix. He'd have the stars around him to compete and go on multiple championship runs in the immediate future, as well as pre-existing relationships within the organization. The Suns have a win-now mentality, the right mix of star power and a front office willing to pay a hefty price to compete for titles.

With the way draft picks are being moved around at the moment, Brooklyn should rightfully receive the maximum amount of compensation possible in regards to draft capital. Ayton will likely be out the door via sign-and-trade; whether he lands in Brooklyn is the biggest question. (The Nets reportedly aren't interested in Ayton, so the Suns may need to find a third team or separate deal.) Mikal Bridges and/or Cameron Johnson would also likely have to be included in a Durant blockbuster.

Is Phoenix truly willing to gut its entire young core and future in order to chase the organization’s first NBA championship? The easy answer on that is yes, and Suns general manager James Jones is known to be passive in valuing the draft process anyways. Phoenix is probably more than willing to include whatever amount of draft picks necessary with the goal of creating the league’s next super-team in The Valley.

One full year after returning from his Achilles tear, Durant averaged 29.9 points, 7.4 rebounds and 6.4 assists on a ridiculously-efficient 63.4% True Shooting percentage. Durant is a basketball demigod — we all already know this — but within the Suns’ system, his own game would reach scary levels of effectiveness.

The ever-flowing gravity pull that Durant and Booker would have beside one another is truly unfair. Paul would be able to slide back into being the third or fourth option too, which is necessary at the twilight stages of his illustrious career. Having a foundation of Durant, Booker and Paul is already enough to be an elite team. After that, the next steps would be to retool around this trio, as the Suns’ roster will look completely different.

For the Nets, it will be very tough to find a realistic return package that can net them a “win-now” offer on top of recouping much-needed assets on the draft front. Sending out Ayton, Bridges and Johnson, plus whatever other picks and assets are involved, would be a monster haul for the Nets to fully reset. The Suns’ young trio paired alongside Ben Simmons would keep Brooklyn at least competitive for the postseason, which seems to be a goal for the Nets in trade negotiations.

It’s not often you find two situations where the stars just align at the perfect time. That’s exactly what’s occurring between Durant and the Suns. Both sides want this to happen, and within the player-empowerment era, it seems very possible that this could come to fruition.

Durant bet on Irving and it blew up in his face. Instead, he wishes to pivot to an organization with newfound stability (thanks to Jones and Williams), a dynamic backcourt of Booker and Paul, and a sizeable championship window since the team projects to be a juggernaut in the Western Conference. Over the last two seasons, Phoenix has the most total wins in the NBA. Adding Durant to the already strong core of winning pieces in place presents the Suns with their best opportunity to hoist the Larry O’Brien trophy.

Durant’s arrival wouldn’t be like Charles Barkley in 1992. This would be an entirely new level of relevancy coming to The Valley, as the Suns have already become title favorites in Las Vegas before a Durant deal has even occurred.

Phoenix wants to commit to an extended championship window centered around two of the greatest players in the NBA’s modern era. Alongside them would be a young star in Booker who is showing to have real star-power pull.

Buckle up, because Durant has now singlehandedly changed the NBA landscape in one fell swoop. Now, the Suns are looking to soon pull off their biggest move in franchise history.