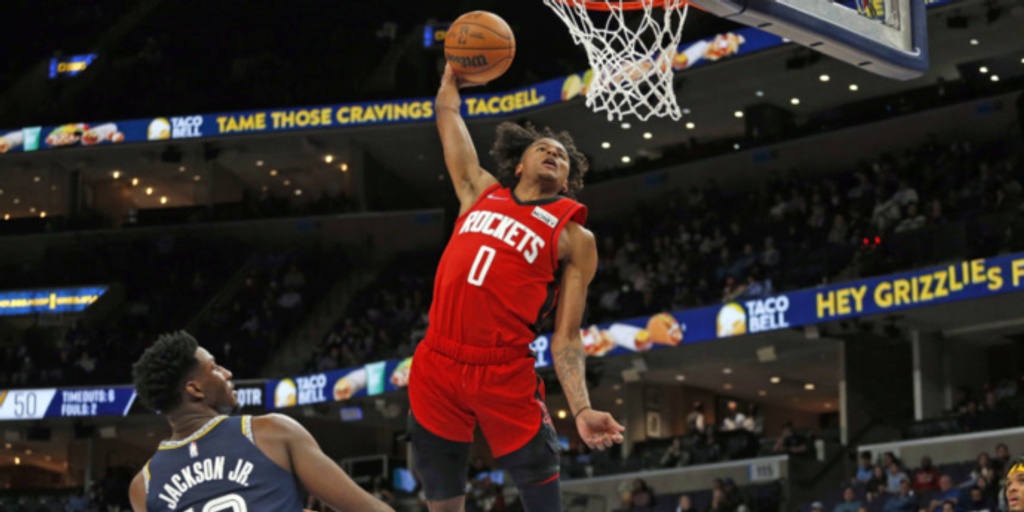 AT&T Slam Dunk is part of State Farm All-Star Saturday Night, which also features the Taco Bell Skills Challenge and the MTN DEW 3-Point Contest.  All-Star Saturday Night will air live on TNT and ESPN Radio in the United States at 8 p.m. ET.  Throughout the broadcast, TNT will feature a special AT&T 5G Legends Cam, powered by AT&T 5G, to spotlight some of the biggest NBA stars throughout history.

Anthony, who was also selected to play in the Clorox Rising Stars during NBA All-Star 2022, is averaging 17.7 points, 6.0 assists and 5.9 rebounds in his second NBA season.  The 6-3 guard leads the Magic in scoring and assists.  Anthony, the son of former NBA player and current Turner Sports analyst Greg Anthony, was selected by Orlando with the 15th overall pick in the 2020 NBA Draft.

Green, a Rising Stars selection, ranks fifth among NBA rookies in scoring at 14.4 points per game.  The 6-4 guard was selected by Houston with the second overall pick in the 2021 NBA Draft after playing with NBA G League Ignite for the 2020-21 season.  Ranked by ESPN as the No. 1 high school basketball recruit in the Class of 2020, Green was the first player to join Ignite.

Toppin, a 6-9 forward, competed in AT&T Slam Dunk as a rookie last season.  He is averaging 7.4 points and 3.7 rebounds in 15.5 minutes in his second NBA season.  After being named the 2019-20 consensus National Player of the Year at the University of Dayton in Ohio, Toppin was selected by the Knicks with the eighth overall pick in the 2020 NBA Draft.

Toscano-Anderson is in his third NBA season, all with the Warriors.  The 6-6 forward has two years of experience in the NBA G League, where he first earned a spot with the Santa Cruz Warriors as a tryout player in October 2018.  He has also played professionally in Argentina, Mexico and Venezuela.  Toscano-Anderson, who played four years at Marquette University from 2011-15, is set to become the fourth player not selected in the NBA Draft to compete in the AT&T Slam Dunk since 2000, joining Chris Andersen, Derrick Jones Jr. and Jamario Moon.

AT&T Slam Dunk is a two-round competition.  Five judges will score every dunk on a scale of 6 to 10, resulting in a high score of 50 and a low score of 30.  The judges will be announced at a later date.

For each scored dunk in both rounds, each player will be limited to three attempts to complete his dunk.  An attempt is defined as the player controlling the basketball and moving it toward the rim.  Click here for a complete explanation of the event rules.