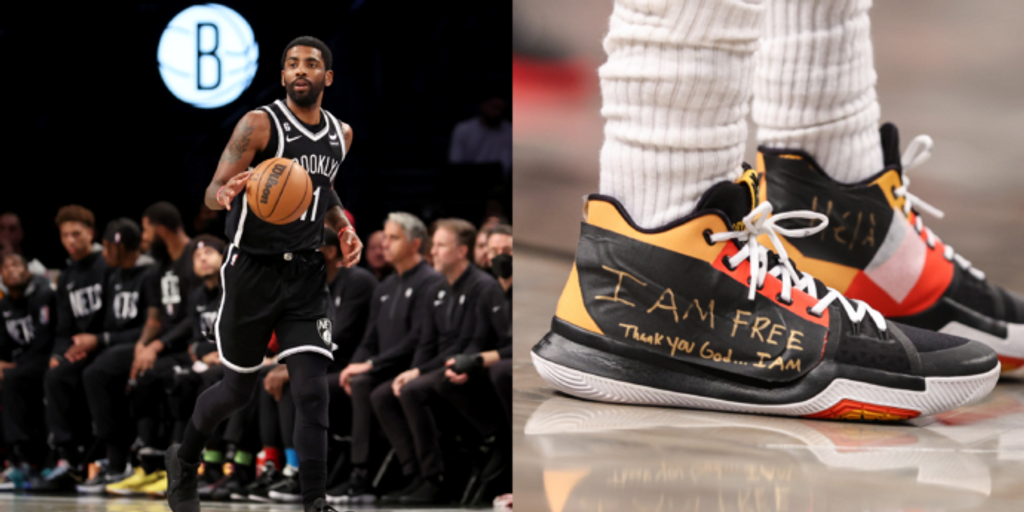 On Monday, Nike announced that it officially cut ties with Kyrie Irving due to him sharing a link to the documentary "Hebrews to Negroes: Wake Up Black America," which many have labeled antisemitic. The news comes after Nike had suspended Irving and canceled his signature sneaker line.

The relationship between Irving and Nike began to deteriorate prior to the recent controversy. Last July, Irving said that the Kyrie 8 sneakers were "trash" and that he had "nothing to do with the design or marketing" of the shoe, but that "Nike plans to release it without my okay."

However, Nike co-founder Phil Knight specifically mentioned Irving's scandal as the reason the company was parting ways with him.

“Kyrie stepped over the line, it’s kind of that simple,” says Nike co-founder Phil Knight. “He just made some statements we can’t abide by and that’s why we ended the relationship.” pic.twitter.com/VWWAEbsIku

After nearly a decade-long run of success with Nike, Irving is officially a sneaker free agent.

In response to this, during Wednesday's game against the Charlotte Hornets, Irving wore the Kyrie 3s with the Raygun colorway, but employed black tape to cover the Nike Swoosh logos. Additionally, he handwrote in marker the messages "I AM FREE" and "Thank you God... I AM" and "Logo Here" on the side of his shoes.

Kyrie Irving covered up the Swoosh on his Nike Kyrie 3 with some messages following his official split with the company.

(The Brooklyn Nets also won 122-116, with Irving leading all scorers with 33 points and finishing one assist shy of a double-double.)

Irving’s agent, Shetellia Riley Irving, told The New York Times that the sides “mutually decided to part ways and we just wish Nike all the best.”

On my radio show, "The Collision: Where Sports And Politics Collide,” my guest was Torraine Walker, the founder of Context Media Group. We examined what Nike’s decision to break ties with Irving means in the grander scheme of things, what actually constitutes antisemitism and if an ADL-style punishment is the answer. This was a great discussion.

Etan Thomas: What was your response to Nike dropping Kyrie and his response to being free? Were you surprised they did that?

Torraine Walker: "No I wasn’t really surprised. I know once this controversy blew up that there was going to be some type of corporate response to it. I didn’t think it would go to this extreme, but at the same time, I can’t really say that I’m surprised. Whether we like it or not, sports and politics are often divisions, and anything that looks like it’s going to affect the brand, the bottom line, is going to be dealt with harshly when you’re dealing with corporations.

"But the one thing I think this really lays out is, it shows the difference between ownership and sponsorship. A lot of times, we get caught up in the idea that someone who is the face of a brand has some type of bargaining power to the level that they can make contractual decisions. So this 'Hebrews To Negroes' controversy was so big that Nike could not ignore it.

"The other side is this — I think this is a great opportunity for Kyrie and also other athletes to look at basically creating their own brand and basically having some ownership in the products they are endorsing and have their faces on. Now, the question is, will the public get on board with that? Let’s be honest, Nike has such a stronghold on the market and such strong brand loyalty and brand recognition that it’s going to be difficult for someone who is coming into the market to do that. But I’m not surprised at all that Nike did what they did."

Thomas: What role did the media have in really magnifying this issue and controversy?

Walker: "The media had the primary role in keeping this 'controversy' going as long as it did. I can see the point where the posting of the documentary may have ruffled some feathers, or it made some people feel like it was an antisemitic thing. But usually when something like this happens, if an athlete or celebrity does something that people take offense to, people get offended, the athlete releases a statement, there’s usually a cooling off period and, then, it goes away.

"But for some reason, there was this drive in the media to make this thing bigger than it was. They took a two-day story and made it into a month story, and I still don’t fully understand the motivation behind that. I know a lot of organizations were pushing this. And I wonder if people inside the Nike organization was pushing this as well because, if I’m not mistaken, Kyrie’s contract is coming up anyway.

"But I think with the media, this was just the an opportunity for them to jump on an antisemitic angle with Black people and a Black man specifically, and they can run with it. So they saw a hot story and narrative that they could really push, and that’s why we are where we are with this situation with Nike dropping him today. So to answer your question, the media had a huge role in this."

Thomas: What do you think about Kyrie and what he did with his shoes on Tuesday night — putting the tape over the logo and writing "I Am Free." What was your reaction to that?

Walker: "I was in favor of it, and I’m glad he did it that way. My question is, how long will this be sustainable? It’s easy to create a moment, it’s easy to get people’s attention, but can you direct that attention into something that will then be tangible for you to really be 'free?' And what does 'freedom' look like? Freedom looks like something different to everybody. Does this mean he is free from having to hold his tongue on issues he is concerned about? Does this mean he is free to create his own sneaker line? Does this mean he is free psychologically? I would love get clarification on that. I think it was a powerful statement, especially the timing, but would love to see it turn into something tangible."

Thomas: You mentioned something before, and it's the question that I continued to ask throughout this entire process: what is considered "antisemitic?" I think right now, there is a wider and wider bucket of what is being casted as antisemitic. On my show, "The Rematch," I spoke with an actual Rabbi, Harry Rozenberg, and we talked about this. He said, "Well, I may have a different opinion than your's, and feel very strongly and emotionally about my different opinion, but that doesn’t mean your's is antisemitic." So I’m asking you, in your opinion, what exactly is antisemitic?

Walker: "Well, in my opinion, being antisemitic means you are making hateful statements about Jewish people, or you are calling for their extermination — which is what a lot of white supremacists and neo-Nazis call for. I don’t believe that having questions about Judaism or having questions or issues as a Black man in America with the relationship between Black people and Jewish people is necessarily 'antisemitic.'

"And what’s happening now is, any questioning of anything having to do with Jewish people or the state of Israel is being seen as antisemitic, and I don’t think that’s fair and it doesn’t make for a rational conversation. It has become this thing where even if you mention it, you are labeled as antisemitic, and that shuts down any conversation. So to answer your question, my definition of antisemitism is violent hatred of any person who is Jewish. That’s my definition of it."

Thomas: Well, I couldn’t agree more. I had a debate with Dave Zirin, my regular co-host on The Collision, when he guested on The Rematch, and we disagreed for literally the entire interview. We just had a different view of everything that had occurred, and this is when everything first happened.

I mentioned my debate with Harry Rozenberg and we disagreed at times — we definitely disagreed when it came to discussing Palestine and Israel — but we also agreed that everything isn’t in the "antisemitic" bucket. I think one of the things that happens is, when you label something as "antisemitic," it’s kind of a lazy argument because it shuts down all conversation. Once you say something is antisemitic, then there is no conversation. But I think there are different things that can and should be discussed without the label of "antisemitic."

Walker: "Absolutely, and like I said earlier, when you are an African-American, your ideas on what 'antisemitism' means and what discrimination feels like is very different than what someone else from a different demographic may be familiar with. And this is not to say that people who are Jewish have not dealt with discrimination and bigotry in Europe and America — they definitely have — but that conversation has to change a little bit when we’re talking about Black people.

"Because, we have to be honest: Black people are still collectively at the bottom of the economic ladder in America. And our relationship with someone who may be a landlord or someone who is exploiting them, it may be coming from an attitude of pushing back against exploitation. It doesn’t mean that it’s antisemitic, and a lot of times that gets lost in this conversation.

"But I do think that one thing that has come out of this conversation with Kyrie and Nike and Kanye [West] and [Dave] Chappelle, to an extent, is that these conversations are beginning to happen and they have to happen in order for any meaningful, impactful dialogue to take place. You can’t just label something as antisemitic and then shut down the conversation and punish anyone who brought it up like Nike did with Kyrie."

Thomas: I agree 100%. And yes, Nike’s decision to drop Kyrie in the wake of him sharing the documentary "Hebrews To Negroes" has actually made them become part of the problem we’ve seen with the ADL. Punishment over dialogue. Labeling over discussion and understanding.

Van Jones also took it upon himself to apologize to the Jewish community on behalf of the entire Black community for statements made by Kanye West — even though I don’t know who appointed him as spokesperson for the Black community. But before we finish, let me make this point clear: a lot of people are, and have been, conflating Kanye West a.k.a. Ye and Kyrie Irving, but they are two COMPLETELY separate issues. One is NOT like the other and should NEVER be lumped together in any way, shape or form.