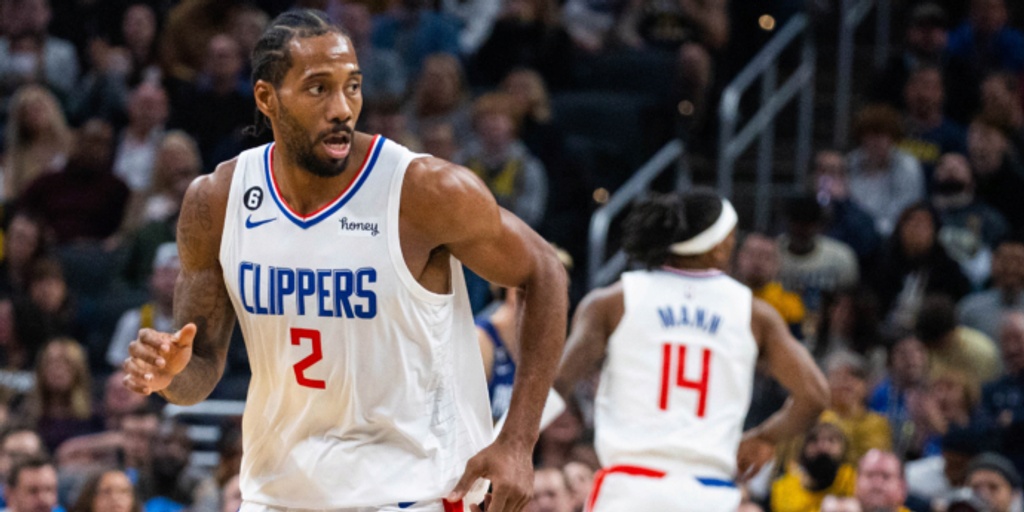 If we know anything about Kawhi Leonard, it's that he certainly won't vocalize that he's "back."

He had this to say two weeks ago after posting his first 30-point game since tearing his ACL in the 2021 Western Conference Finals:

"That's just how the game played out," Leonard said after that win against the Wizards. "Was able to get to my spots, rose over the top, knocked down some shots. When it's that time of the game when you want to be as aggressive as possible, either you're gonna make shots or pass it to your teammates and they make shots. Just want to make a play."

Leonard details his psyche for the performance, but he's not exactly trumpeting his totals, so let's do it for him.

Leonard's long, slow reintegration from his injury really took until this past December for the weight to be fully lifted after he dealt with recurring stiffness in his knee, plus an additonal right ankle sprain. He played five games before Thanksgiving and never cleared 25 minutes.

But Leonard has played over 27 minutes a night since returning from the ankle injury on Dec. 5. He's averaging 20.7 points, 7.0 rebounds and 4.2 assists per game in that span.

On the season, the 21-18 Los Angeles Clippers are 11-5 when Leonard makes an appearance. (He missed Monday's loss against Miami due to an illness). They're outscoring opponents by a staggering 16.7 points per 100 possession when Leonard's on the floor — a number that ranks in the 98th percentile among players this season, per Cleaning the Glass.

LA's leading man is doing nearly everything we've come to expect from one of the most well-rounded superstars of this generation: Creating as a scorer, facilitating when necessary and anchoring an elite defense.

The mid-range zone continues to be Leonard's home. He's taking over half of his shot attempts in the intermediate areas, and is currently drilling a career-best 52% of those attempts. The 31-year-old has also returned as a dominant isolation scorer in his limited action this season. He gets those buckets in classic Kawhi fashion — not with a viral handle or quick-twitch speed, but with precision, strength and touch.

Check out how Leonard's faring among 69 players who have logged 40 or more possessions in isolation, per Synergy:

It's a relatively small sample, but then again, Leonard has only played 16 games all year. He goes to iso plays 15.1% of the time (a pretty high rate), and is succeeding as usual.

But Leonard is more than an iso scorer or mid-range maestro, and his surgical approach to offense manifests as an attacking and playmaking presence. He doesn't drive the ball that often — a modest 9.1 times per game — and less than a quarter of his shots come at the rim.

When Leonard does drive the basketball, he's tough to stop. He's scoring on 56.5% of his driving field goal attempts this is season, which is tied for 15th with Giannis Antetokounmpo, if that tells you anything. He gets an assist on 10.3% of his drives and turns the ball over just 2.7% of the time. The latter rate is the lowest among 100 NBA players averaging six drives per game this season.

The Athletic's Mike Prada brilliantly illustrated how Leonard's strength and processing speed make him a puzzle for opposing defenses:

Kawhi Leonard, savant. This is reading the game, not just playing it. pic.twitter.com/cGdBLSeE6l

I have more where that came from. Leonard dished out 7 assists in his last contest, a narrow 131-130 loss to the Indiana Pacers. Four of them were particularly remarkable:

In this game, we see:

None of these dimes are all that flashy, nor are all of them particularly mind-boggling. But they're further proof of Leonard's unparalleled sense of timing. Nothing looks like a big deal to him because, well, he just gets everything that's happening.

Of course, Leonard's reputation as one of the sport's all-time defenders is well-established. But it's worth highlighting one more time, because while he's not atop many steals leaderboards or metric quantifiers, the veteran's impact remains just as pivotal. The Clippers are 10.1 points stingier per 100 possessions when Leonard takes the court, a 97th-percentile difference.

Here's one example where Leonard won't get credit for any specifc action, but he mucks up a Boston Celtics drive with his help from the nail. He's adept at covering just enough ground to get a giant hand on the ball, but not overcommitting to a play and losing control of his positioning.

At a time where superstar explosions are dominating NBA headlines, Leonard continues to fly under the radar just by being himself. He's still got more room for positive regression; his ice-cold 27.4% three-point clip will almost certainly improve.

We no longer need to wonder if Kawhi Leonard will ever make it back to his old self, though. He's back and fully capable of leading the Clippers in a frenetic Western Conference.