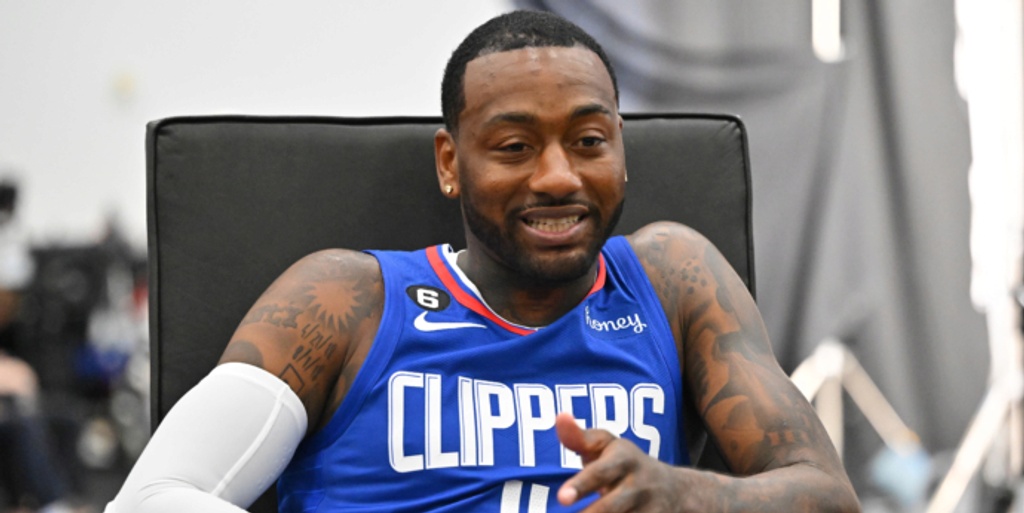 John Wall ready to make his triumphant return with Clippers

Seventeen months later, a lot has changed. Wall is now suiting up for the Clippers after signing a two-year, $13.2 million deal with Los Angeles over the offseason.

Wall sat out all of last season at the request of the Houston Rockets, who wanted to prioritize the development of their young core. Now, the 32-year-old guard is ready to make his triumphant return.

“I've got a chip on my shoulder,” Wall said during the Clippers’ media day. “Anybody would; I mean, having [not] played last year and come back and play this year. I’m happy I get the opportunity to play the game that I love... Whatever role T-Lue (Clippers head coach Tyronn Lue) want me to do, I am willing to accept. I'm just trying to come over here and help them win.”

“I just feel like for my whole career, a lot of people don't give me my respect. I don't know why. It is what it is,” Wall said. “Like I say, I've got a chip on my shoulder... Just let the world know like you're going to see a dog. That's what you got when you signed me.”

Wall’s new teammates and coaches are excited about what he’ll bring to the team.

“Adding John, his pace is tremendous,” Lue explained. “That's going to allow us to get easy baskets — guys will get open threes, easy shots. Him getting downhill and getting to the basket changes our team dramatically. His pace, the way he plays, brings a different dimension to our team.”

“John is definitely a piece, I think, that was needed,” Paul George said. “I think so much was put on [Reggie Jackson]’s plate to where I think the addition of John will help shoulder a lot of that facilitating and playmaking. I think what he brings and where the value is so huge for us is his transition game. That was one of the things teams did against us was crash the boards, because there was really no transition game from us. They wasn't worried about that. I think with John, his ability to play and sprint up and down and get going in transition, I think, kind of keeps teams honest. They can't crash everybody. He rebounds as well as any guard. He's definitely a piece that was needed, and I'm excited. That's been a brother of mine for a long time. We came in this league together. I'm happy that [he’s here]. I'm sure Clipper Nation will embrace him and this will be a great home for him.”

“I think the biggest thing is his competitive drive and will,” Norman Powell added. “He talks a lot of trash early, but I think it's just the energy that he brings to the game, his pace, understanding where guys are at. He's always looking to make that pass. Even when he's getting down to the teeth of the defense, he's caught me a couple times being on the opposite team thinking he's about to make the lay-up and he kicks it out to my guy last minute for a wide-open three. That attention to detail and the way he attacks the basket and knowing the game and where guys are going to be, knowing the rotations of the defense, finding the open guys for easy looks, he's continuing to find those guys in those sweet spots.”

While Wall is in a good place now, he recently revealed that the last two or three years were the darkest of his life. Following the death of his mother, Frances, he became depressed and even considered suicide. In an incredibly moving article on The Players Tribune, Wall opened up about his depression, suicidal thoughts and the moment he finally sought help.

“If you haven't checked the story out, you should check it out. I think it's dope,” Wall said. “I think it helps us. It's Black men that just go out there and [won’t ask for help because of] our pride. I think we are very prideful, and a lot of times we think we can accomplish everything by ourselves until we really hit some reality and it gets tough. Hopefully, my story can help a lot of people and inspire a lot of people to not wait until it's too late.

“Everything I've been through the last two or three years, I don't think a lot of people could have gotten through that. [It’s a] true testimony to myself, my team, my family, my kids, the mother of my kids — just having great people around me — and me maturing as a man, becoming a better father, a better person.”

In recent years, many NBA players have spoken out about their mental-health struggles. Wall is the latest example, joining DeMar DeRozan and Kevin Love among others.

“Just because we make a lot of money and we're famous, they think we don't have the same problems regular people got. We’re still a regular person,” Wall said. “At the end of the day, we just wake up and get an opportunity to play the game we love and make the money to take care of our families, but we still go through all the same emotional things y'all go through. That's one thing I don't think a lot of people understand. But I think for me, like just hearing one of my close friends, DeMar DeRozan, and Kevin Love come out and speak on depression, just hearing that [was huge]. And then also, with the platform we have with social media, we're able to touch a lot of people. Like, everybody is accessible now because of their camera phones and social media, so I think that gave us a platform to go out there and speak on it a little bit more.”

“I think we're kind of changing the narrative,” Powell added. “I think people and fans from the outside looking in view us as just athletes and not as people, and we're dealing with the same daily struggles and life challenges that they are. Our profession and our bank accounts are a little different, so they feel like we don't have any issues at all, but we still struggle with day-to-day living, day-to-day crises with our families, personal issues, health issues that we have to deal with. I think we're pushing the envelope and the narrative that we're more than just athletes. That's been a slogan around the league for a while now in the last couple years, and that's the truth. We're all struggling with things that we don't always put out to social media or we don't always say in interviews that we have to step away from the game and deal with in our daily lives. I think it's a testament to the players being brave and having the courage to talk about their struggles, and to show that we're not perfect and we're all dealing with things behind closed doors. I think it's a way you can motivate others to go out there and seek help and be open about their struggles as well.”

During a recent pick-up run alongside George, Wall hit a number of shots, then yelled, “I’m back!” It was an emotional moment for the veteran guard, who has been through so much – on and off the court – in recent years.

After making it “through some of the darkest times you can imagine,” the five-time All-Star is hoping to finish this next chapter of his life on a positive note — by hoisting the Larry O’Brien trophy.

“We all got an ultimate goal,” Wall said. “We got Kawhi [Leonard], who has two championships; we got T-Lue, who’s won [a title] as a coach. We're all a little older now in our careers and that is the ultimate goal, to try to win. It starts [in training camp], taking every day, every practice, like we’re a championship team, and hopefully we can get that goal.”