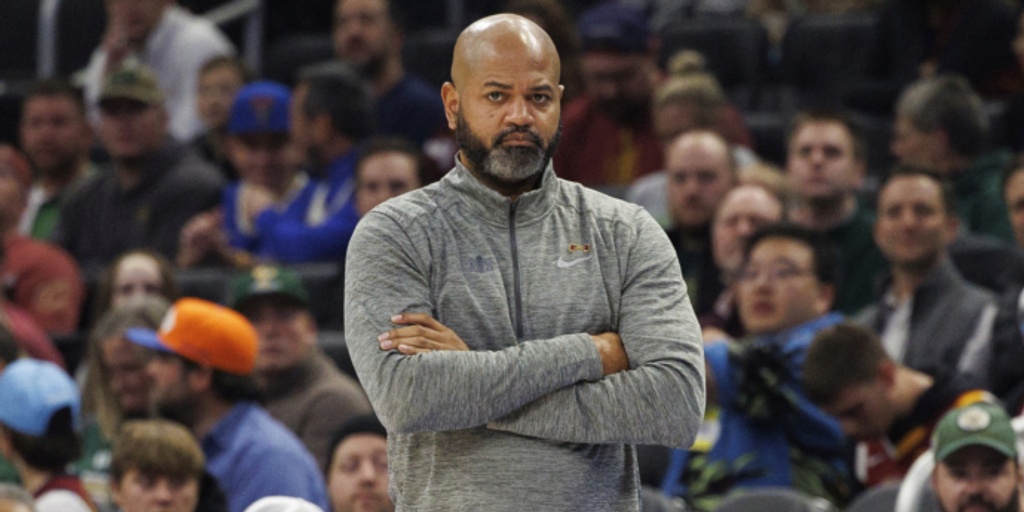 Following his team’s fifth-straight loss after starting the season 8-1, Cleveland Cavaliers head coach J.B. Bickerstaff sounded off on his frustrations with the team’s attitude and defensive effort over the last week-and-a-half.

“It's more about solving things than getting a message across at this point. We're not playing winning basketball right now, and it's that simple,” Bickerstaff told reporters after falling to the Milwaukee Bucks 113-98 on Wednesday night. “We have a formula in place that allows us, or will allow us, to be successful. Holding each other to that is what we have to do, and right now, we are not. It's that simple. It's my responsibility to search and find the guys that are most willing to play the way we want to play and help us all be successful. So that's what we'll do."

While speaking of his love for his players and the locker room, Bickerstaff candidly referred to the team's recent complacency.

“I think, honestly, we got kind of a fat-cat mentality. We went out and won eight games in a row. Everybody was giving us love and praising us, and we got really comfortable,” Bickerstaff said. “We are the team that won those eight games though, right? We are a really good basketball team. This is about maturation and growth from a team as a whole. Not one guy's gonna do it. Not two guys are gonna do it. [It’s about] understanding the difference between being the guy who's chasing and the guy who's being chased, and how hard it is to win in the NBA when you are a team who other teams expect to be good and expect to win. [It’s about] how individual players take that, how that's a sign of respect. But they're [also] competitors, and they want to take that from you. So what you have to do every single night to show up and win, we're still learning that unfortunately.

“We have a lot of season left to be played, obviously, and we'll get it right. This is a valuable lesson for us. One thing my dad (longtime coach-turned-Cavaliers front office executive Bernie Bickerstaff) told me a long time ago is, 'The NBA will always humble you. As soon as you get too big for your britches, no matter who you are, the NBA has a way of humbling you.' Hopefully, this has been enough and we'll make the decision to do what's right by each other.”

Bickerstaff dug into Cleveland’s noticeable drop-off on defense as a reason for the team’s slumping ways.

“It started kind of on our West Coast trip. I first saw it on the defensive end of the floor," said Bickerstaff, whose Cavs own a league-worst 122.0 Defensive Rating over the last five games. "We got away from being who we are. We got to a point where — and respectably so — we were confident that we could score the ball. But we should always be... if you want to win and win in this league at the level that we hope to, you can't do it if you don't guard. And defense comes down to the effort you're willing to put in. The second effort, the third effort, the fourth effort that you're willing to put in. And right now, we don't have enough guys that are putting in the second, third and fourth effort.

“Too often, I see us saving ourselves, and for what I'm not sure of. But you give up 21 second-chance points tonight [to Milwaukee], it shows us you're being outworked. So again, our responsibility as coaches is to find the groups of guys that are gonna do what we ask them to do on a consistent basis. Does this shake the way I feel about our team? No. I love all these dudes the same. But it's our responsibility to do what's best by the team and find the guys that are gonna play the way we need to play.”

It’s obvious that the Cavs are leaving teams way too comfortable out on the perimeter as of late. During this losing skid, they’re allowing their opponents to nail 68.8% of their right-corner threes (48.9% on 9.4 attempts from both corners combined) and 42.5% of their above-the-break long-distance looks. As Bickerstaff said, the closeouts haven’t been executed nearly well enough. And when they have been, it still hasn’t mattered because they’ve given shooting confidence to the other squads. (See Trey Lyles and the Sacramento Kings game.)

Not helping matters is the absence of Jarrett Allen, who’s been dealing with an ankle injury and a non-COVID-related illness for the last two games. He is the anchor of the defensive interior while Evan Mobley plays a dangerous weak-side-defender role. However, when Mobley shifts to the 5, bigger players tend to bully him on the block. In addition, guards are less timid to attack and, subsequently, kick it out to the arc to shooters. Dean Wade being sidelined hasn’t been discussed enough either; he is paramount to Cleveland’s spacing and perimeter defense.

Still, it’s a next-man-up league and the games don’t stop. A four-game homestand begins on Friday against the Charlotte Hornets, followed by matchups with the Miami Heat, Atlanta Hawks and Portland Trail Blazers.

Bickerstaff closed his postgame press conference by insisting that the Cavs will right the ship.

“I believe in those guys in that locker room, and that hasn’t wavered,” Bickerstaff said. “History and experience tells you that building good teams doesn’t come without its difficulties. To be honest with you, it was more of a shock that we won eight games in a row. Just from history and experience, what we’re going through now is what you see early in teams that are building and that are a work in progress. And that’s what we are, let’s just be honest with ourselves here.

“Do we believe there’s a good team in that locker room? Hell yeah. Do we believe we’ve got individual talent in there, elite individual talent in there? Hell yeah. But building a team takes more than that. It takes time. It takes experiences together. And my belief in this group has not wavered, and it never will... We’ll fix it. I’m certain of that, and we’ll be better for this time.”