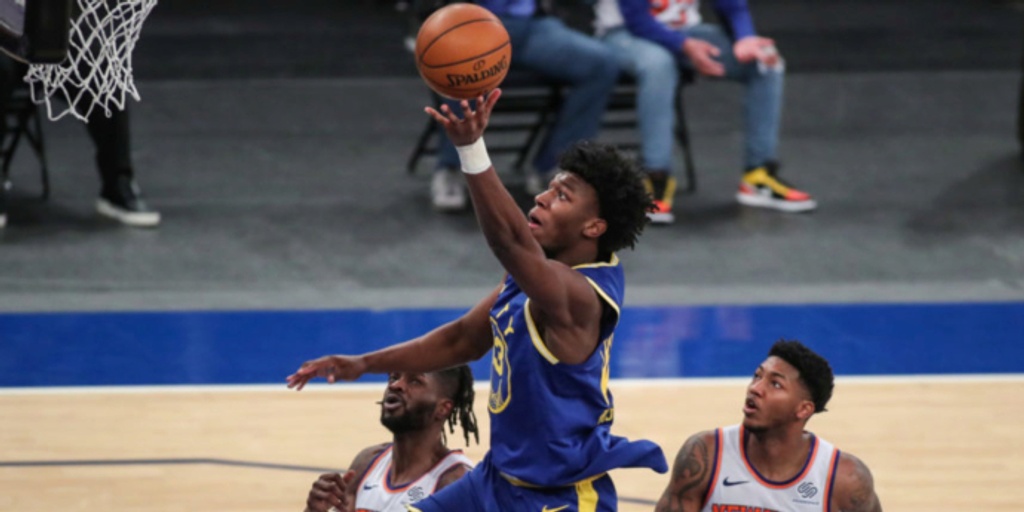 Golden State Warriors rookie big man James Wiseman missed a mandatory COVID-19 test during All-Star break weekend and had to be held out of practice when the team reconvened Wednesday night — and coach Steve Kerr called it “disappointing.”

Wiseman's status remained unclear for a road game against the Los Angeles Clippers on Thursday night. The No. 2 overall draft pick last year out of Memphis, Wiseman is averaging 11.8 points, 5.9 rebounds and 20.8 minutes.

Wiseman, who turns 20 on March 31, stayed in San Francisco during the break, according to Kerr. The NBA alerted the Warriors on Wednesday the rookie center couldn’t practice.

Stephen Curry hopes Wiseman will use this a valuable learning opportunity. The two-time MVP saw the 7-foot center earlier Wednesday.

“It's what you have to do,” Curry said. “For a rookie to come in there's obviously a lot of things thrown at you just in terms of what's happening on the court but now obviously all the protocol stuff, the accountability of the break. But I think we all understand this is our job and we have things to do. When you don't do them, it puts you behind a little bit. Hopefully, he won't be out long. ... We all got to do our part to get through this season. It's been good so far, so I only expect that to continue.”

“For his first year it’s something that’s new. It’s our first year testing. First All-Star break,” Paschall said. “Stuff happens in the NBA. You can’t really dwell on it too much.”

After Thursday, the Warriors return home to host the Jazz on Sunday.

“He’s on the trip,” Kerr said about Wiseman. “He could not be with the team on the practice floor.”

Wiseman began the season as a starter then came off the bench for a stretch — including five games after sitting out 11 with a sprained left wrist — then was among the starting five in the final game before the break at Phoenix last Thursday.

Kerr is planning changes to his rotation to begin the season's second half with the Warriors' record at 19-18.