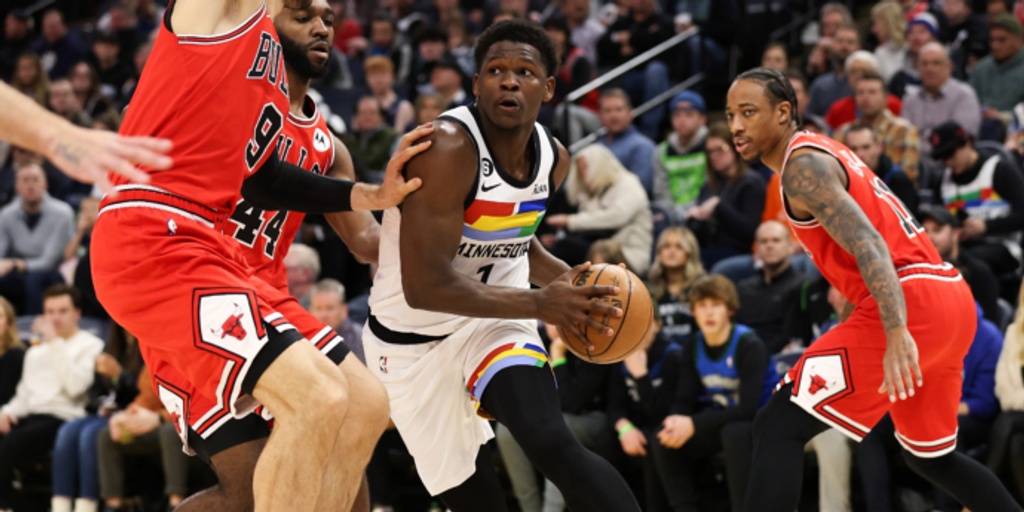 It's been a clunky start for the Minnesota Timberwolves, struggling to maintain the tear they were on in the second half of last season.

The Rudy Gobert trade, to this point, has done more complicating than complementing. His presence put more pressure on Karl-Anthony Towns to operate on the perimeter, on both ends. Uneven guard play from Anthony Edwards and D'Angelo Russell has exacerbated matters. Gobert himself has struggled to catch and finish non-dunks, and his interior defense hasn't been as impactful as many had hoped.

That four-man grouping has played 331 minutes together, and has outscored opponents by a whopping two (2) points in that span. That isn't good enough for where the Wolves want to go.

For a group that needs to gain chemistry, the last thing it needs to face is an injury problem. So of course, Towns is out for the foreseeable future with right calf strain, and Gobert has missed the last three games with an ankle injury.

This kind of flux screams "underachievement is certain," but yet, the Wolves have ripped off a three-game winning streak. They've been the NBA's best offense during that frame, scoring 125.6 points per 100 possessions. Their 150-point showing against the Chicago Bulls is doing some heavy lifting in that sample, but still — a team that ranked 20th in offense heading into that game dropped 150 in regulation without its star bigs.

What's popped during this stretch is the play of Edwards. It's not just the blend of brute force, track-star-speed and shifty shot creation. He's in the midst of the best playmaking stretch of his career.

What's impressive, again, is the passing. He's averaging 9.0 assists during the winning streak, compared to 2.3 turnovers. Edwards' mark of 27 assists is the most he's ever had in a three-game stretch.

The Wolves have leaned into a ball screen-heavy approach with Edwards. You can see the split below, per Second Spectrum:

This may shock you, but that 100-through-three stretch is the highest of his career. The Wolves have seen the fruits of it though, scoring over 1.2 points per possession (PPP) on trips featuring an Edwards ball-screen.

When you go through his recent film, nothing really stands out as impressive. That sounds slanderous on its face, but it highlights two things:

1) Because the league is filled with young magicians and skip-pass merchants like Luka Doncic, Trae Young, Tyrese Haliburton, LaMelo Ball (26-and-8 since returning four games ago) and Darius Garland, it's easy to set the bar too high for young ball-handlers. We're really spoiled in this regard.

2) Because of Edwards' explosiveness and scoring chops, he's never had to be a magician or showcase advanced manipulation to generate good looks.

The biggest shift from Edwards during this stretch has been his willingness to make the simple play. Or, to distill it further, he's more willing to get off the ball.

Before this three-game stretch, 25.6% of Edwards' pick-and-rolls ended with a pass. Among 71 players with at least 300 reps under their belt, that ranked 71st — dead stinkin' last. He ranked 65th among that same group of players in assist percentage (11.6%) out of pick-and-roll.

During this stretch, he's passing on nearly 46% of his pick-and-rolls. His assist percentage has more than doubled (25.7%). That's not a coincidence.

To be clear, there are some fun passes in his recent film. I really enjoyed these pair of live-dribble skip passes against the Chicago Bulls, a team that often asks its bigs to defend at the level of the screen. It's encouraging that Edwards can string out that pressure and make these kind of darts.

But a lot of the growth has been oscillating between getting off the ball early and fully engaging the big on drives for the sole purpose of creating open looks.

Nothing exemplifies this quite like his work with Naz Reid. They've had a good thing going all year, with the Wolves generating 1.12 PPP on trips featuring a ball-screen between the two. During the win streak, that number has risen to absurd 1.29 PPP. For reference, the Steph Curry-Draymond Green and Luka Doncic-Christian Wood partnerships are both at 1.17 PPP this year.

It's clear that Edwards trusts him. If Reid has a short-roll opportunity, Edwards has had no issue slipping it to him early so he can do work as a scorer — or make the easy pass from there. And because Reid can also shoot — he's shooting 36.1% from three this season, including a 40.7% clip above the break — Edwards is fine with generating a paint touch to clear the runway for a pick-and-pop triple.

(If I can just take a beat here: Naz is good, man. He's a starter-level big on a team with two All-Star centers ahead of him. I'm very intrigued by what his market will look like this offseason.)

What's exciting about this stretch from Edwards is the simplicity of it. Engaging defenders and making passes isn't difficult. Seeing a hedge or double team and getting off it isn't difficult.

This is easily replicable stuff, so long as he trusts it.