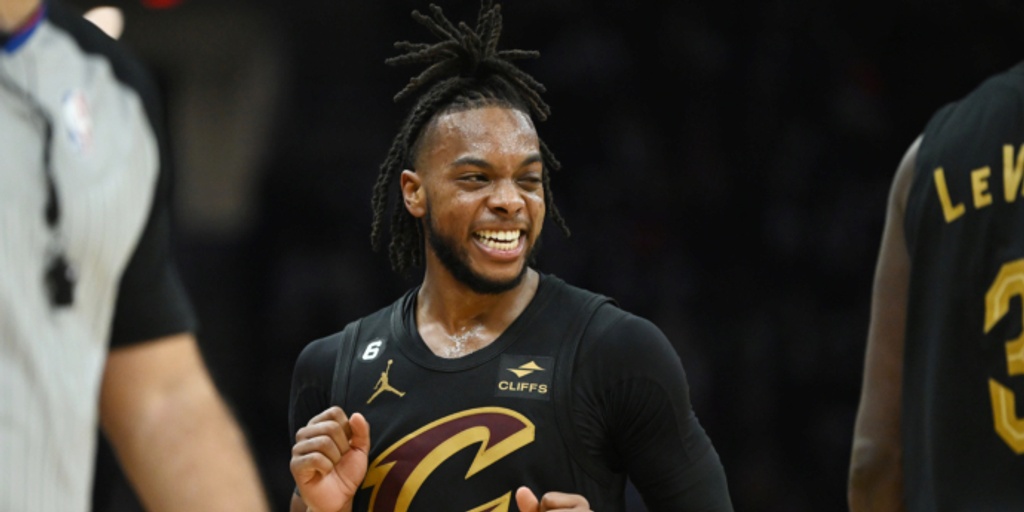 For the first time since suffering a left eye laceration in the team’s season opener in Toronto, Darius Garland suited up for the Cleveland Cavaliers. And oh, did he ever deliver in his 2022 home debut.

Coming out of the gates smoking hot against the revenge-minded Boston Celtics, Garland took Donovan Mitchell’s pregame advice and was taking shots from the jump, scoring 14 points to go along with 3 assists and a pair of takeaways in the first quarter. It was a sign of things to come. He finished the night with 29 points, 12 assists, 5 rebounds and 3 steals in a whopping 42 minutes.

“Feels good. Got a win, I saw that," Garland quipped after the Cavaliers’ 114-113 overtime victory over the Celtics, the team’s second over Boston in the last five days. "It wasn't really a man on a mission (in the first quarter), my teammates just told me be aggressive, go do what you do. They give you any wide open, shoot them. I know we've been out for a couple games, but he still wanted me to be aggressive. Really, Donovan told me, 'You've gotta go take the first six shots.' That's what he told me, so, I was like, 'Alright, I got you, bro.'"

“He really set the tone tonight,” added Mitchell, who meshed well with Garland in his first game back and had a fourth-quarter scoring barrage to swing momentum. "I can’t speak for everybody else, I just didn’t know what his rhythm was going to be like after being out a month, I think that’s the biggest thing. When you have your legs, when you have your energy, you’re excited, and he came out like he’s been playing with us down this whole stretch. He’s going to score the ball, and his passing, man, he’s creating, finding guys, making the game look easy and really kind of sparked us, especially in that first half. Always under control. It’s great to have him out there.”

According to both Mitchell and Cavs head coach J.B. Bickerstaff, Garland’s enthusiasm to play was extra noticeable at Cleveland’s morning shootaround.

“I mean, he was ready to go,” Bickerstaff said. “I mean, like you could feel it... He was ready to contribute in a big way. And I mean, like, there was not any shyness to him. It was, ‘I'm going out here and I'm gonna assert myself on this game,’ and his teammates followed him.”

“You could tell he was excited, just running around the gym, kinda just happy, a little bit of a different step to him,” Mitchell said. “When you’re out for that long, and I’ve been there, it can kind of take a toll on you. But he continuously was the best teammate when he’s out, for us, for the guys. A night like tonight comes, it’s really his first game of the season all over again. You saw the energy. I told him he’s probably not going to be able to sleep for the next seven, eight hours. He probably won’t sleep at all. That’s what you get, man. It’s great to see him. And when you saw him this morning, he just looked like a kid in a candy store, just happy as hell — and he’s not a morning person, so that was impressive to see.”

Postgame, Garland spoke to the media for the first time since the injury and detailed his reaction to his eye injury, which happened when Raptors guard Gary Trent Jr. was going for a steal and caught him by accident. (Garland revealed his fellow Klutch-Sports-agency-member Trent apologized via text that night and insists there are no hard feelings about the play, saying “that comes with the game.”)

“I was super scared,” Garland said. “When it first happened, I rolled over, I felt blood coming out of my eye. So that's when I got really nervous. And I was ready for surgery in Toronto. I was expecting that. I was expecting stitches and being out a couple months. But by the grace of God, I'm here with two eyes now and I'm back and I'm healthy.”

A scary moment with a bleeding eye in Toronto, rehabbing for two weeks, light sensitivity and not being able to see dribbling to the right: Darius Garland details all of it for the first time after his sensational return to #Cavs. @basketbllnews pic.twitter.com/OoyrrL0qyz

When asked about the most difficult part of the recovery process, Garland responded that he couldn’t see dribbling right. Mentally, watching his teammates pumped him up, but he also wanted to be a part of the fun and the success.

“Super tough,” Garland said. “Everybody keep asking like, 'How you doing? How's your body?' I'm like, 'I'm perfectly fine, it's my eye.' And just sitting over there and just [having] to wait and just seeing everybody get loose warming up and going through full practice and stuff, it was just kinda aggravating. I just tried to stay high. My teammates, they were winning. They was doing well, so I was happy about that. But I just wanted to be on the floor with them. I wanted to feel that energy. But I'm happy to be back now...

“...But I had a great time on the bench, I learned a lot, I seen a lot from our team and what other teams do to us, I mean, I have a lot of notes and stuff that I was writing down, so I'm ready for the next time we play those other teams.”

When Garland approached the podium, the lights were beaming. He looked over at a Cavs staffer and almost asked for the sunglasses he’d been wearing every game on Cleveland’s sidelines while supporting the squad. It’s clear that his eye is still sensitive to that kind of exposure. A source close to the team even told Basketball News that it’s still only at 75-80%.

Still, when the ball tipped off and a national audience was watching, no lights were too bright for the All-Star point guard to handle.

“I seen the first one go in, so it stopped bothering me to be honest with you,” Garland said with a laugh. “I'd seen that one go in, so I was like, alright I'm good. But yeah, the doctor said I didn't have to wear any goggles or anything. My eye was healing pretty good, so I just went out there and just took a chance.”

Darius Garland looked right at home, and the Cavaliers finished off a perfect homestand going into their upcoming five-game road trip. If this momentum carries over, the NBA will take even more notice of a unit that is firing on all cylinders — top to bottom.

“We fight really hard. We're really starting to try to put 48 minutes together just of playing Cavaliers basketball. And that's what I'd seen over the time I was sitting out — that we just don't back down from no one,” Garland said.

“This group is just really hard-nosed, and any number is called, everybody's ready. From [Kevin Love] to Dean [Wade] coming to starting lineups, Cedi [Osman], Isaac [Okoro], RoLo (Robin Lopez) got some minutes tonight, played valuable to us. That's our group, and I love it about that for sure."