When Karl-Anthony Towns tested positive for the coronavirus in mid-January, the Minnesota Timberwolves desperately needed somebody to rise to the occasion in their star's absence.

Naz Reid knew he had to be the one to step up.

The burly big man had already been making his mark as a regular in head coach Ryan Saunders' rotation, playing 20 minutes a night until that point. But with his face-of-the-franchise teammate sidelined, Reid burst onto the scene while holding down the fort as a starter (aside from one matchup at Cleveland).

In 11 games between Jan. 18 and Feb. 8, Reid averaged 14.4 points, 5.9 rebounds and 1.5 blocks per game, emerging as an efficient contributor on offense and a stout presence on defense. He notched eight double-digit scoring efforts and recorded a pair of double-doubles.

“I mean, going out as a team, one of our best players is out, so going out there and trying to do something similar to what he did, if not better,” Reid told BasketballNews.com in an exclusive phone interview. “And also, within the game, helping myself moving forward.

"[KAT] means a lot. Like I said, he's one of our better players on the team. He can do it [all] -- passing, shooting, defense, all that stuff. So when we don't have him, we're missing a big factor for this team. And stepping up in his role, it was definitely a big role, but I was able to get it done for the most part."

Reid’s relationship with Towns goes back many years to their upbringing in the New Jersey area, with Naz at Roselle Catholic High School and Karl-Anthony just 11 miles north at St. Joseph. Despite the four-year difference in age, the two played on the same AAU team together.

“It’'s a little bit of a bond already built," said Reid, who’s reunited with his friend at the pro level. "I've learned a lot [from him], from outside of basketball to being on the court and doing what I do best -- from angles to high-post; it's a lot of things.”

Unfortunately, we’ve only seen a handful of minutes with both bigs on the floor together (Reid believes he and Towns are interchangeable at the four and the five). They have thrived separately, though.

Coming off of the bench on Wednesday night, Reid dropped his third 20-plus-point game of the season, and his second of the last three games. Arguably the most encouraging part of his sophomore campaign has been the different ways he puts the ball in the bucket.

Reid is an avid pick-and-popper. The Wolves draw up a ton of sets where he sets high screens for his teammates and, with a quick twitch, retreats to the top of the perimeter. When he attempts a jumper off these designs, he is scoring 1.22 points per possession, according to InStat. When he decides to put it on the floor off a pump fake, the results are similarly positive.

"I try to really just play to my strengths, being able to shoot the ball, [I] can drive the ball off the roll and score at the rim,” Reid said. “So I kinda just pick and choose off of what the defenders and my point guard's doing [and] just read that."

Whether it’s a pop or a roll situation where he screens and moves into the paint, Reid doesn’t have a particular preference. He just wants to get points out of the possessions he’s involved in. There’s more than one effective way he goes about accomplishing that. 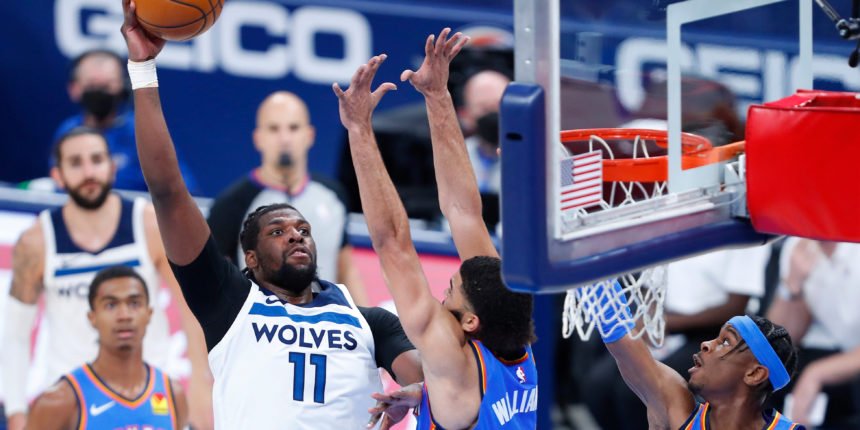 In the post, he has a soft jump hook with great touch using either hand. He knows just how to time it and when to go to it, keeping an eye on which shoulder his defender is guarding him on and where the opposing help may come from. When he doesn’t need to rush it, he’ll turn and toss it up. When the opportunity presents itself, he’ll immediately flip the ball towards the cylinder. He is “very confident” in that aspect of his game and takes it seriously.

On the outside, Reid possesses a feathery, rainbow jumper that’s cashed in at a 39.7 percent clip on catch-and-shoots. Though the typical stretch-big stations himself in the corner -- and Reid does have 15 attempts from the left corner -- he tends to sneak back above the break or position himself at the right elbow. At his size and with a quick release, he agrees with the notion that it is a shot that is basically unblockable. He also understands that he can keep improving it.

“It's always been like that since a younger age, since middle school, high school,” Reid said of his high-arcing jumpshot. “I would definitely say it's a leg up because a lot of bigger guys can't really defend pick-and-pop or know how to defend pick-and-pop, so it's definitely an advantage.

“I've been shooting threes since I started playing basketball, really, and not knowing that big guys really don't shoot threes -- I just was firing 'em. Then, once I realized that can be a great expansion in my game, I worked on it a whole lot since I've really locked into basketball. I've had a lot of help from others. I don't think you're ever too old to learn anything, so I definitely [have] learned that and I'm still learning."

If you’re looking for a mid-range savant, don’t expect it from Reid. A couple of weeks ago, he became an analytics favorite by telling the world of his disdain for those looks. Even though it’s more of a “comfortability thing,” he expanded on the thought to BasketballNews.com.

“It's not that I can't shoot it. It's just ...I don't know. If I'm that close to the rim, I may as well get to the basket,” Reid said. “If I'm a little bit further from the basket and just take a three, it counts as more points. So I don't know, I just never... I never really shot mid-range. I don't think I ever really shot mid-range at all, so it kinda fits into our system."

If you think of a big man in the NBA, a seven-footer typically comes to mind. The Renaissance of the hybrid center is upon us, with stars such as Nikola Jokic and Joel Embiid commanding defensive attention, scoring at multiple levels and making their teammates better while simultaneously intimidating their opponents with their versatility.

Reid has a desire to follow that lead. In addition to observing Towns, he has studied film of Jokic and Embiid as well as Hall-of-Famers like Hakeem Olajuwon and Shaquille O’Neal. He wants to mold himself into an all-around threat and be the best player he can be, even mentioning his goal of becoming a Hall-of-Famer someday.

Aware that he’s not as tall as the top centers of the game at 6-foot-9, Reid utilizes his quickness, lateral movement and stronger base (a 264-pound frame) to get up under them aggressively and even the score.

"I'm a basketball player as well as them,” Reid said. “I'm an offensive player, so I kinda just play to my advantages, trying to get them to their disadvantages and be the best to my ability in the predicament that I'm in. I'm not the traditional size, but my work ethic is there and that's what helped me to get to this point now, by being able to do what I can do at my size."

Though he considers himself an offensive player, Reid has done a solid job of protecting the paint. Per InStat, opponents have made just 32 percent of their layup attempts against him. That’s especially impressive when he’s seen the 10th-most amount of cut shots in the league as a defender. When discussing why he's had success, he mentions his awareness on the defensive end and his timing when Minnesota needs a helper.

Reid gets particularly competitive when scorers try to attack him, especially guards. He remembers how Luka Doncic squeezed by him often on the perimeter in a near comeback win at Dallas. It’s a big-man pride thing. (On the opposite end, he feels the same way about smaller guys guarding him on the block.)

“It's part of the game not to let them score on me,” Reid said adamantly. "I definitely take that personal."

He also emphasized the importance of altering shots down low, something he’s worked on extensively with Towns and Wolves assistant coach Kevin Hanson.

Last season, the Wolves gave a rookie Reid the opportunity to play significant minutes post-All-Star break. There were ups and downs, however, the experience gained is something he is grateful for, and it has certainly played into how far he’s come now.

"Just having more confidence and playing with a purpose and playing hard and having a lot more energy and doing the things that the team needs to get a win,” Reid said. “It wasn't easy, but I learned quickly, I picked up [things] quickly and I was able to move forward with the next step.

“I would say that [getting used to the speed of the league] and just learning the game of NBA basketball, it's a lot different. You've got great players. I think it's one of the best leagues in the world, so you're playing against other players who can do what you can do, if not better [than you], so just trying to adjust to that."

Just as Reid is learning, so is his team. The Wolves are the youngest team in the NBA, with an average age of 23.9 years old, and their 6-20 record is reflective of that. Handling the losing is not easy, but there are ways to turn negatives into positives.

“Just competing, keep fighting and learning from our losses,” Reid said. “I don't think it's a loss unless you learn. If you learn [from] what you've done before, you can get better at any time or any moment. I feel like that's just something that we take pride in, making it a lesson instead of a loss.

“We know we've got a lot more fight to give and we've got a lot more to prove. It's not ideal for us to be the youngest team in the league, but it happens, so you just have to deal with it and get through it. We are getting better every day and every game, so that's something that we have to draw from since Game 1 to now. We're gonna win games. We haven't won as much as we've liked to so far, but [we're] definitely gonna win games and we're gonna keep learning and keep working hard and improving.”

Whether Reid speaks that into existence remains to be seen, but it wouldn’t be wise to bet against him. He’s earned the trust of his teammates and his coaches in Minnesota, which is a testament to his hunger.

"It means a lot because they see my whole work ethic,” Reid said. “And I'm out there proving [myself] and they see it and they see a vision in me.”

MORE:
NBA

NBA Tweets of the Day: There will only ever be one Melo
Giannis Antetokounmpo: Utah Jazz are the 'best team in the West'

Featured News

Lakers top Heat, Kings top Warriors at California Classic
22h
How does Malcolm Brogdon fit with the Boston Celtics?
yesterday
David Aldridge, Marc Spears, Etan Thomas on Kyrie Irving's demonization
yesterday
Examining how Rudy Gobert fits with the Minnesota Timberwolves
2 days
What does Jalen Brunson's new contract mean for the New York Knicks?
4 days
Why Kevin Durant's attraction to the Suns should come as no surprise
3 days
What would a Kevin Durant trade look like?
June 25 2022
NBA trade reaction: Analyzing Dejounte Murray's fit with the Hawks
5 days
Subscribe to our newsletter
SUBSCRIBE
Follow Us



Basketball News
Home
Podcasts
Scores
Draft
Stats
News
Charts
Contact
Contact Us
Advertise With Us
Terms Of Use
Privacy Policy
Do Not Sell My Personal Information
Cookie Policy
Download Our App!
Stay up-to-date on all things NBA
Copyright © BasketballNews.com 2020. All Rights Reserved.
