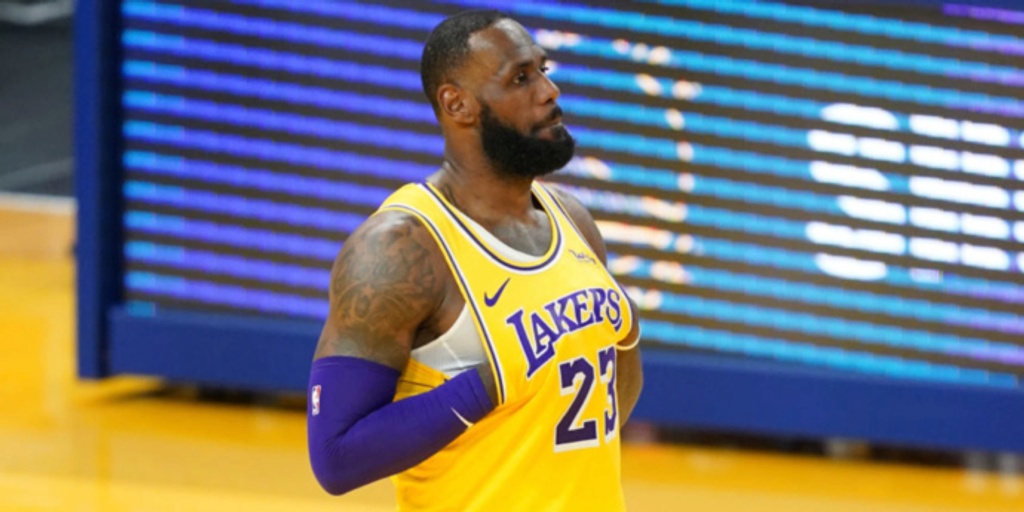 Gingerly, the usually nimble-footed king raised his right arm as he jogged up the floor. His gait a tad off, he dialed back before settling into a home-run trot.

His ankle throbbing, LeBron James decided he couldn’t wait any longer. Committing an intentional foul, he abandoned the stage at Staples Center, stepped into the shadows, limped into the tunnel and scurried into the locker room. We haven’t seen him take the floor since.

The Lakers have predictably struggled since then. They would go on to lose to the Atlanta Hawks on that night, and have since won just four of their 10 contests.

Though unfortunate for the Lakers, if we are to make anything of Thursday evening’s Instagram post from James, it’s this: the four-to-six-week timetable for his return may qualify as overly conservative.

That the league is in the midst of Most Valuable Player race that is as wide-open as we’ve seen in quite some time could reasonably lead one to believe that James realizes the Lakers need him and perhaps senses that a fifth MVP award is there for the taking.

One can’t help but wonder whether the thought has crossed his mind.

"The weatherman says the weather is changing soon and it predicts a thunderstorm is coming," James wrote on Instagram.

Take from that what you will.

If you ever get someone who's close to James alone in a room, you might be fortunate enough to get them to tell you something that few know — his desire to make history is insatiable. To LeBron, being universally considered the “G.O.A.T.” isn’t his focus, and it hasn’t been for a long time. He can’t beat Michael Jordan in an NBA Finals, and he can’t dunk on Kareem Abdul-Jabbar.

There are many who see the LeBron James glass as half-empty, and always will. He’s long ceased to care about those opinions.

But at this point in his career, there continue to be things that motivate him. He’s already become the first player in NBA history to win NBA Finals MVP for three different teams, and entering play on April 8, he is about 3,100 points behind Abdul-Jabbar on the NBA's all-time scoring list. Although missed games will diminish his chances, James understands his place in history and the opportunity that he has to catch The Captain.

It motivates him, much in the same way that the unfathomable feat of one day sharing an NBA court with his son does. Until recently, James has publicly avoided putting any pressure on 16-year-old Bronny to be good enough to even make it to the NBA, much less to suit up alongside him. But as the years have progressed, so has James’ willingness to make an admission.

"That's definitely one of my goals, but that's a long-term goal,” James said about that prospect in March, even admitting that it would be a “cool thing” for his resume and legacy.

What it all means is something quite simple: LeBron is keeping score, and he has been for a long, long time.

Wanna ruffle The King’s feathers? Just ask about him the fact that he’s “only” won the MVP award four times. Many close to James will tell you that he feels like he should’ve won the award twice as many times as he has. And he hasn’t exactly kept those feelings to himself over the years.

As recently as last September, James admitted that he was “pissed” to have received only 16 first-place votes as Giannis Antetokounmpo took the award home for the second consecutive year, and pointed out that he’s finished second in the MVP vote four times.

Abdul-Jabbar is the only player to have won MVP six times, with Jordan and Bill Russell being the only five-time winners. James and Wilt Chamberlain have each won the award four times, but it’s pretty obvious that LeBron thinks that he should be the G.O.A.T. -- at least when it comes to taking home that trophy.

Sure, there are many who will rightfully point out that the Lakers’ quest for an 18th championship and James’ pursuit of his fifth ring should trump any personal aspiration around his wishes for additional accolades... But why choose if you could have both?

The Lakers are understandably being conservative with James and Anthony Davis, but the truth is that the team’s chances of coming out of the Western Conference this season will be just as much about who they play as it will be about how healthy they are. And while the final standings probably won’t be determined until the final night of the regular season, one doesn’t need to be a math wiz to figure out that James playing means more wins for the Lakers, and thus, a higher seed and a more favorable bracket.

It just so might mean another shot to abscond with an MVP award that's ripe for pilfer.

This season, more than any other in recent memory, the race for MVP has been like watching a group of 9-year-old children play musical chairs.

Kevin Durant, James Harden and Joel Embiid have each seen their candidacies hurt by injuries after they appeared to move out front, and you get the feeling that the voting media simply won’t give Antetokounmpo the honor of being the first player since Larry Bird to win the award three consecutive years – not while the Milwaukee Bucks are perceived to be underachieving, anyway.

Donovan Mitchell and his Utah Jazz are inexplicably being ignored, while Nikola Jokic’s absurd numbers and efficiency are really only just now getting some recognition. When it comes to Most Valuable Players, one would be hard-pressed to argue that Chris Paul doesn’t belong in the conversation, so he will probably peel off a vote or two, even though his individual numbers aren’t spectacular by his standards.

Where that has left us is with an MVP race that’s as wide-open as we’ve seen in some time, a Lakers team that could benefit from a few more wins, a LeBron James who’s recently complained about being passed over for the award and the belief that a dominant 20-game stretch could seal the award for any one of the aforementioned contenders.

Back in the Orlando bubble, as LeBron James was crowned king for the fourth time, he stood at center court flanked by Anthony Davis.

Despite being filled with glee, James was still hungry.

“I want my damn respect,” he said with a calm defiance.

In the form of the 2020-21 NBA’s Most Valuable Player award that appears to be ripe for the picking, don’t be surprised if he decides to take matters into his own hands and comes to get it.