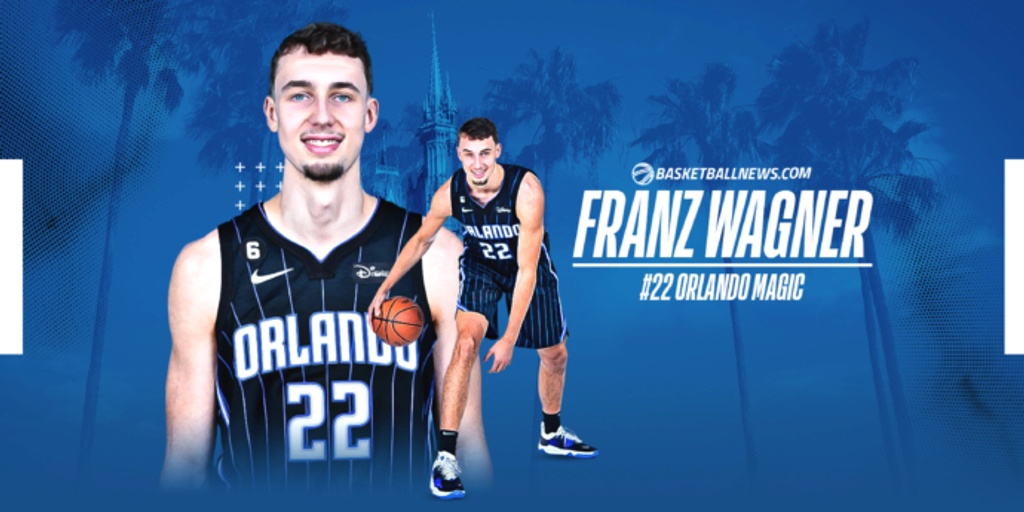 When Franz Wagner heard his name called in the 2021 NBA Draft, he did not expect to be a lead ball-handler and playmaker this early in his career with the Orlando Magic.

“No, not at all,” Wagner told Basketball News in a locker-room interview in Cleveland. “Obviously, it depends a lot on the situation and just what the team needs. I think all the players, but especially me, I think I'm very lucky to get so much responsibility so early. Obviously, it's a little learning on the fly too, but being able to [make] mistakes and [be] learning is the coolest thing for a young player.

In three of the first five games of the year, Wagner has dished out five assists. If that doesn’t quite jump off the page, maybe his counting numbers will: Franz is averaging 16.4 points, 5.6 rebounds and 4.0 dimes per contest with a 24.4% usage rate.

Further, his 1 point per possession as a pick-and-roll ball-handler will illustrate his effectiveness. Just watch how he reads and reacts to certain situations in the half-court.

Even against the defiant and aptly-named Tower City duo of Jarrett Allen and Evan Mobley, the second-year forward went west often on his way to the paint and finished with his left and right hands on numerous possessions. To be fair, he was also blocked and challenged at the rim by his fellow draft classmate, but the fearlessness was on full display.

The 21-year-old exhibits impressive patience for his age, particularly with the timing of his decisions and his instincts. It’s knowing when the screen is coming, how and when to use it and, ultimately, determining whether a pass or an attack is the best option.

“I really do believe (it was) starting out early on in his years, playing in Germany, learning how to play basketball, and he's a student of the game,” Orlando Magic head coach Jamahl Mosley said of Wagner’s high basketball IQ. “He loves to study film. He understands when to cut, when to move, how to move, the setups he has to use in a pick-and-roll. He does a great job of that, but it goes back to that studying of the game, and our development guys doing a phenomenal job with him.”

Wagner echoes Mosley’s sentiments, giving the credit to all of his youth coaches in Berlin. In addition, he believes Juwan Howard’s teachings at Michigan helped him mature in that department.

“I was able to play some pick-and-roll there [in college]. And even there, I wasn't perfect and he let me make a couple mistakes, so I think that's super important for the confidence of a player,” Wagner said. “It's probably just from when I was really young. The coaches [in Germany], I think, did a really good job of making sure I know how to play, know kinda when to go, when to slow it down sometimes in games. And then I think it's just reps and a little bit of experience in playing in those situations for a little bit.”

Terrence Ross is the veteran of this up-and-coming Orlando bunch, and he’s watched Wagner’s progression since he came in as a rookie. Assuming the point forward role is just another tool to add to the bag.

“[He’s adjusted to it] perfect, man — walked into it perfectly,” Ross told Basketball News. “He's really worked on his game, and you can kinda see it — it's speaking for itself. He's doing a lot of different things and he looks very natural and comfortable. He has a pro game and it's translated. Like, you didn't really see too much of that in college, but it translated a lot when he got to the pros. So it's just one of those natural things that you can't really teach.”

Something else that looks unteachable is Wagner’s newest unique turnaround jumper. Driving into the elbow area — again, usually on the left side of the floor — he’ll stop in his tracks, plant, turn and fade away from 8-to-10 feet. It’s almost reminiscent of a future Hall-of-Fame superstar that happens to hail from Germany.

“You know, I wish I could take some type of credit for that, but he's seen and been around Dirk [Nowitzki] before,” Mosley said. “And I will tell you what — our player-development staff does such a phenomenal job with these guys. They have 'em ready before games, they're working after. They just do such a fantastic job of finding different wrinkles in the game of what he's capable of doing and using his height to his advantage.”

“It's just, I think, another good shot for me. I think it's tough for people to contest it. I know people are worried about me getting all the way to the rim; I think it's good to have counters to that,” Wagner told Basketball News. “And then, I think it's just a good shot. I'm a pretty tall player. Leaning back a little bit, it's hard to contest that.”

Snakebitten by injuries and misfortune once again, the Magic are trying to turn a negative into a positive. Standout guard Cole Anthony is the latest to go down, as the team announced he sustained an oblique injury on his right side during Wednesday’s game in Cleveland. He’s the fourth player in Orlando’s backcourt to get hurt, joining Jalen Suggs, Markelle Fultz and Gary Harris on the sidelines.

So what happens when you don’t have point guards to organize your offense? You turn to your forwards to lead the pack — which is exactly what Mosley’s had to do in back-to-back seasons with the Magic.

“It changes the way we rotate a little bit, but what it also does — it provides opportunity,” Mosley said prior to the team’s game against the Cavaliers. “I think I talked about it the other day — last year when Jalen went down and Cole went down, it provided us the opportunity to see Franz with the handle. And a similar situation happening now, you're gonna see the ball in Paolo [Banchero]'s hands a little bit more. So those are what they provide, the opportunity for other guys to do some things we might not see.”

Though the Magic have employed some large lineups by necessity, it also follows a league-wide trend of big-man combinations. For example, the Cavaliers started three 7-footers last season, the Toronto Raptors’ roster is littered with rangy wings that have plenty of height, and even the Minnesota Timberwolves have thrown Karl-Anthony Towns and Rudy Gobert together in their frontcourt.

However, as we’ve seen, having the personnel necessary to execute it successfully is the key.

“It is about size and skill. I think it is very true, just guys that can make decisions,” Mosley said. “I don't care how small or big they are, you want decision-makers and high basketball IQs on the floor as much as you can have it.”

“I think one, defensively, I think you can switch ball-screens and stuff like that. I think it makes it hard for people to get easy shots. And then anytime you have skill and size on the floor, you can rebound better without losing good decision-making,” Wagner added. “Yeah, I think it's just good for any offense. At the end of the day, it's a skill game and if you have five players that can make decisions with the ball, it's really good.”

Winless to this point, Orlando is learning good habits through unfortunate setbacks, and the players are developing not only individually, but also as a team. Wagner is encouraged with the direction the Magic are going, and eventually, it’s going to all come together.