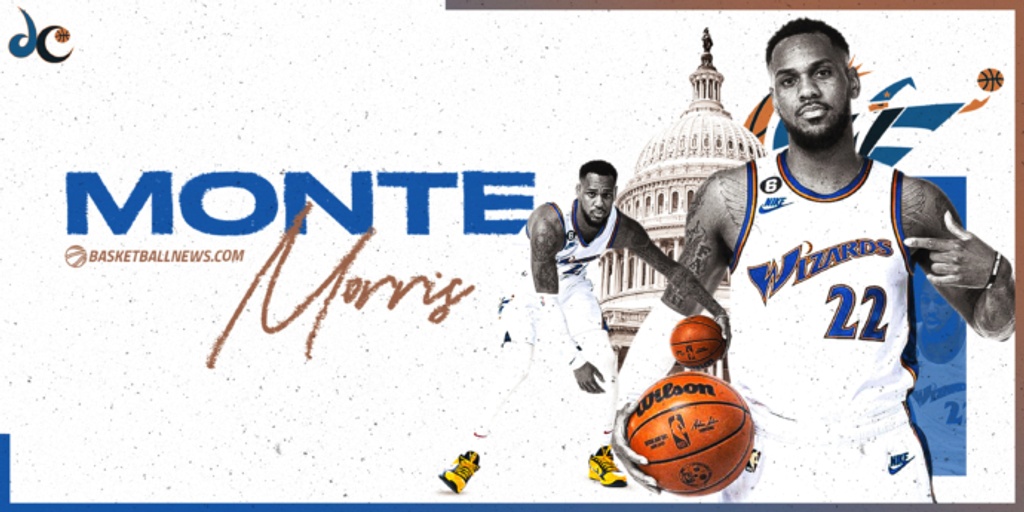 For the second year in a row, Monte Morris has earned his position as a starting point guard in the NBA. However, his surroundings look a little different.

After Morris logged a successful campaign as a full-time starter with the Denver Nuggets, the organization traded the 27-year-old this past summer to the Washington Wizards. It’s the first time he’s experienced being dealt in this league, but he’s taking it in stride.

“We got good vibes, good energy right now. It's still a new system for me, new teammates, so every day it's something new and getting better,” Morris told Basketball News at the team’s pregame shootaround in Cleveland on Sunday.

Luckily for him, there are some friends of his to ease the change. For one, Wes Unseld Jr. — who worked with Morris in Denver for the first four years of his career as an assistant to Michael Malone — is the head coach in D.C.

“I would assume it's quite challenging,” Unseld explained. “When you kinda come up in one system and you go from G League to rotation [player] to starter, you've been with that team for quite some time, [and] to make that adjustment it's gonna take a bit of time. New teammates, new system — some of it's very similar, but certainly, different components.”

To make matters even more comfortable, well-respected veteran swingman Will Barton was also involved in the move, which sent Kentavious Caldwell-Pope and Ish Smith to the Nuggets.

“That's my guy,” Morris said. “I told 'em, I've been knowing 'em in Denver, so he's been my teammate on every team I've been on in the league. So the transition's definitely easy 'cause he was one of my vets when I was a rookie, and me and him [are] close, so it's good to have that guy, a familiar face here with you to get through everything.”

Sometimes when players are sent away in trades, their roles can change at the drop of the hat. That’s not the case here. In his lone season as the lead floor general in Denver, Morris averaged 12.6 points and 4.4 assists over 75 contests. He turned it up in the postseason even more with 14.0 points and 5.3 dimes on average while shooting a healthy 42.3% from distance.

Boasting 48 total games of playoff experience and an impressive run as a top guard in Denver, Morris became a sought-after talent for Washington's backcourt.

“Grind,” Morris said of what it took to get to this point as a starter. “I mean, just grinded every day and just turning it into work. Good or bad days, just trying to string 'em together and just learn as much as I can. Also, just opportunity, getting a chance to showcase and show what I could do, so I was able and fortunate to get a starting job here.”

Now the elder statesman, Bradley Beal has been holding down Washington’s guard room for a decade. Kristaps Porzingis has been a Wizard for just 20 games, but is building chemistry and looking sharp out of the gate on both ends. Referring to them as “two high-IQ guys,” Morris feels he’s been establishing a good rapport with each.

“I mean, it's been real easy,” Morris said. “They can score a ball at a real high clip, so I'll get 'em in spots and stuff and get 'em good looks."

While numbers are quite noisy in small sample sizes this early, it’s worth noting that the trio has a Net Rating of plus-19.3 together in 72 minutes, and while Morris is off the floor, the Beal-KP combo is a NET minus-17.3 (per PBP Stats).

Morris showed plenty of love to Delon Wright, too — another fresh face with the Wizards who offers a different feel at the 1.

“Delon, it's his eighth year in the league this year. I'm going on Year 6, so I think it's good to bring in two point guards who kinda play (an) older-school game, get guys involved,” Morris said. “Delon’s a little longer than me, so he comes in and changes up the game in a different way and I impact [the game] in a different way [than] Delon.”

With each passing night, Morris is growing more comfortable. Despite a losing Wizards effort in an overtime battle with the Cavaliers, Washington battled throughout the way, and he scored 13 points to go with 6 assists and a team-high plus-6 in the box score.

“I think he's doing a great job,” Unseld said. “There's no way to fast-track that — the game reps, practice, as many minutes and reps that they can get together I think helps. But for where we are right now, I think he's done a terrific job leading in from the preseason to a short [three-game] window."

If this were a younger version of himself, Morris would’ve had a harsher reaction to Sunday’s result. Now a veteran in his own right, he’s taking a more positive, forward-looking approach.

“I just think, like, [I'm] not trying to dwell on games too much,” Morris said Sunday morning. “Just knowing at midnight, you've got another top guard or somebody you're going against. I used to dwell on games so heavy. I would just, like — if I had a bad game, I would let it sit on me. I still think about 'em if I do have a bad game, but I just know we've got 80 more and I've just gotta be the best version of me the next day. I think that's the biggest thing I've done in my career, is just maturing on that level.

“It's hard [to take it day-by-day], so I just try to stay [as] even-keeled as possible. We're in the best league, got the best job in the world, wake up and play basketball. So I can't get too high or get too low. It's gonna be sunny days, it's gonna be beautiful days, it's gonna be days where it ain't going my way, that night where I'm like 1-for-13 or some sh** like that, and didn't impact the game how I impacted it [usually]. But like I said, God’s got a plan for me. He always has. Just try to live and die by that."

With the Detroit Pistons visiting the nation’s capital Tuesday night, Morris and the Wizards will quickly turn the page. In this long season, he aspires to accomplish two feats in particular.

“Just show everybody I can win with a different team, beat the odds as sleepers,” Morris said. “They don't really believe in us, so that's it.”