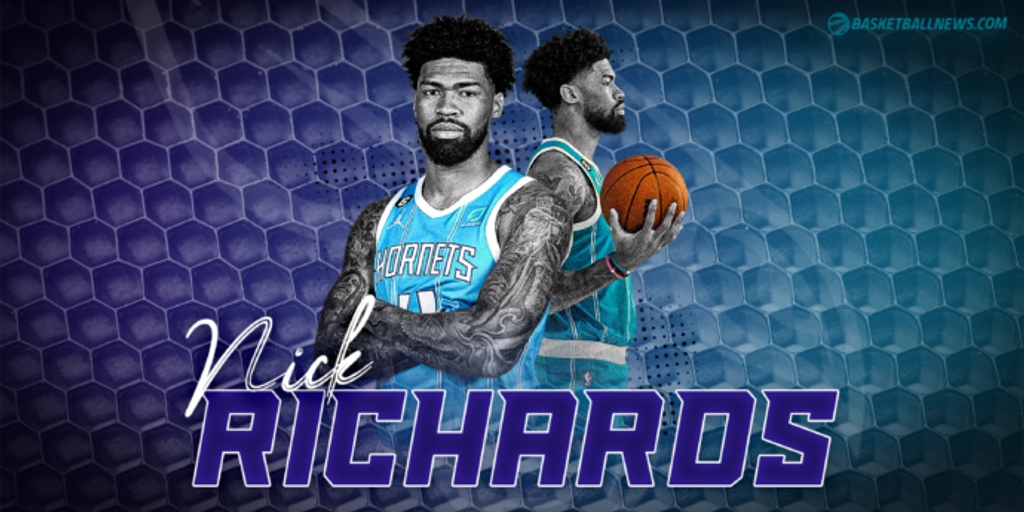 Cementing himself within an NBA rotation for the first time in his career, Charlotte Hornets big man Nick Richards is the only active Jamaican player in the league.

He joins only seven others from the country to have accomplished that, including the legendary Patrick Ewing (and his son Pat), Jerome Jordan, Samardo Samuels, Omari Johnson, Rumeal Robinson and Wayne Sappleton.

He looked up to Ewing for certain, but having competed in every sport when he was growing up, Richards idolized one of his countrymen in particular.

“Usain Bolt,” Richards told Basketball News at last Friday morning’s shootaround in Cleveland. “When I was younger, I played track and field.”

A 7-foot, 245-pound behemoth of a man, Richards is taking his opportunity to show the NBA what he’s made of and running with it — just like his hero.

Entering last weekend, Charlotte’s backup big came in as the league leader in Offensive Rating (137.4) on a strikingly efficient 68.2% True Shooting percentage over a career-high 19.0 minutes per contest.

Veteran center and Hornets teammate Mason Plumlee jokingly answered for him before Richards could respond to hearing those numbers: I want some more minutes!

“Best vet in the world (laughs). I don't know how I feel about that honestly. Maybe Mase is right?” a grinning Richards said, leaning back in his chair courtside.

“It feels good to get some minutes, get some reps in. The past couple of games, [I’ve] been getting into a good flow. Just feeling good. I'm contributing to my team in a positive way. But honestly, we should be able to get more wins under our belts. We should just learn from every single game and just try to get better from every single loss that we have so far. Just locking in on details, just getting better at playing for 48 minutes. As [Hornets head coach Steve Clifford] said, we don't want to play good for [just] 30 minutes and not 48.”

An instant-impact player with the Hornets’ second unit, Richards has been making the most of his newfound opportunity. Over the last two seasons, his playing time was sporadic, honing his skills with the Greensboro Swarm in the G League as a rookie, then, observing the guys who’ve been in front of him in the rotation with the big club.

“Honestly I feel like the first two years were really good, were really more important years for me,” Richards said. “I sat back and learned from my vets that are in front of me. Just watched them and how they play on the floor, and just try to duplicate that.”

Richards wasted no time doing it. To start the season, he put together two double-doubles in three games, collecting a combined 39 points and 21 rebounds as Charlotte started its campaign with a 2-1 record. Over his last two contests, he's produced 24 points and 24 rebounds in total, notching back-to-back double-doubles.

“I think [it’s] just his approach. Being consistent in this league is hard to achieve. For him, he's really been consistent for us. And I think as a teammate, you appreciate that, the staff appreciates that,” Plumlee told Basketball News. "Obviously he had the games earlier in the year where he had incredible numbers, and I think he'll have more games like that, but just knowing what you're gonna get every night is a sign of maturity.”

One aspect of Richards’ breakout that Plumlee enjoys is watching him take the mantle while taking a breather.

“It makes me feel great, and for our team, it really gives us a chance,” Plumlee explained. “What's been fun is like... our rotation is consistent, but other teams do it differently. So to see him match up with the starting bigs too and do his thing has also been exciting.”

Explosiveness plays a key part in Richards’ success. He is all over the glass to keep possessions alive, trailing only Steven Adams with his 16.6% Offensive Rebound percentage, per Basketball-Reference. In addition, the Kentucky alum is scoring 1.42 points per possession on putbacks, according to InStat.

“I can get up, but I have to load a little more," Plumlee said of Richards' athleticism. "He's quicker. He's a quicker jumper. Some of his dunks are really impressive."

“Honestly something Coach [Clifford] has been telling me is to try to gather myself more instead of just trying to get it up there quicker. But I'll probably focus on that,” Richards explained. “Instead of just going straight up, you just try to gather and try to dunk the ball.”

Asked to elaborate why Charlotte is asking Richards to use that gather more, Clifford said it had to do with him getting his shot blocked too often.

"If he gets a little bit lower, he gets his eyes up, he can read the defense better to me and still make a quick move," Clifford said. "Or, you know what they say, 'Look up and look out.' If everybody's here [in the paint], just touch the ball out sometimes too. So I think that's part of his development also."

Richards’ screening and handoff abilities are helping his teammates too. Among two-man combinations that the Hornets employ (min. 100 minutes), he and Terry Rozier lead the pack with a plus-20.4 Net Rating. Next is teaming up with a rejuvenated Dennis Smith Jr. (15.2), and then, the Richards-Kelly Oubre Jr. duo (7.2). There’s also a great rapport with LaMelo Ball, though they’ve only played three games together so far this year.

“We have really, really good guys that play really well off the pick-and-roll. That's really what our offense is based around,” Richards said of freeing his teammates up for good looks. “So it's just more about knowing your role on the team and just also playing your game within that role."

"I think right now he's the 35th-best screener in the league, which is important to me," Clifford said on Friday. "I think for our team, when we get everybody back, we have three guys who have the potential to be really good pick-and-roll players, and you need a good screener. And he's a good screener and he's getting better. He's improving that way. His screening on the ball and off the ball."

As a roller, Richards is seeing some progress as well. He is getting smarter when it comes to diving hard toward the bucket, and has begun timing his cuts at the right moments.

"I think he locks into the things that make him play well. He doesn't worry about the other things," Clifford added. "He runs, he rebounds, he brings physicality, he screens, and he's gonna develop into a good roller. And if he does those things, I think he understands that those are important skills to have in this league. It makes him unique."

As we approach the quarter mark of the NBA season, Nick Richards seems to be finding his niche, and Plumlee and Clifford both recognize that growth and potential in real time.

“I think he's having a great year,” Plumlee said. “I think he's impacted the game every time he's in it, and he's impacted both ends. He's getting us second-chance points, he's defending the rim, he's running the floor hard and he's been a big boost for our bench.”

"You look at Jarrett Allen, what's he do? He runs, he sprints to the rim, he protects the rim; he's a terrific player," Clifford said. "And I think Nick understands that he can become as good as he wants to be by getting good at those things. Those are skills that a lot of guys don't appreciate."