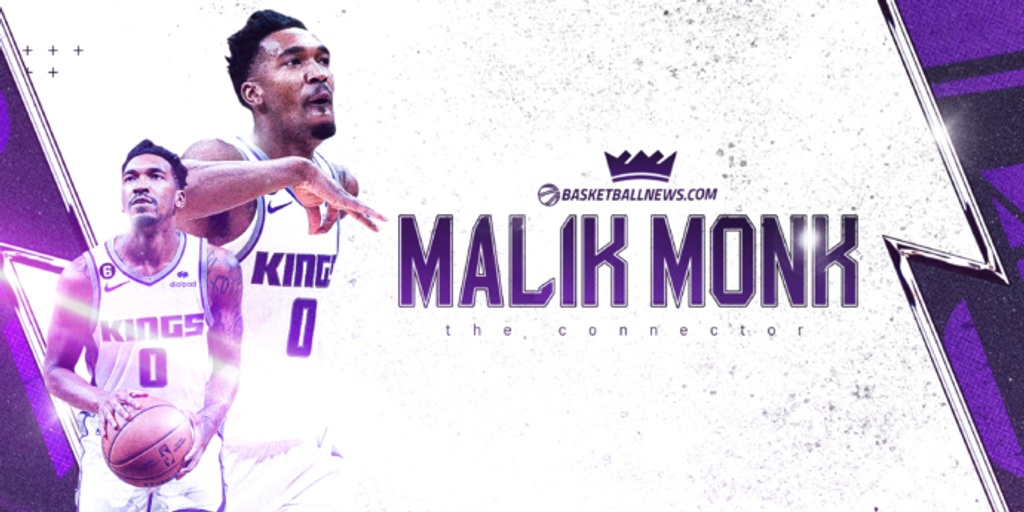 When Mike Brown was coaching in San Antonio under Gregg Popovich, he recalls a young, free-spirited Manu Ginobili, whose play would range from “wow” to “doing some stuff that helped Pop get white hair quicker.”

Now in the head seat with the Sacramento Kings, Brown sees a little bit of that in Malik Monk in the best of ways.

“I'm not comparing him to Manu, so don't write this down at all,” Brown said with a laugh. “That's kind of Malik. He's gonna do more good than bad out there, so you gotta let 'em hoop. You've gotta let him feel his mojo and all that other stuff, and that's what I try to do.”

Averaging career-bests of 14.5 points and 4.0 assists per game on a personal-high 60.1% True Shooting and 26.9% assist percentage, Monk is playing with a palpable confidence and energy that has opened up parts of his skill set we haven’t necessarily seen on a nightly basis since he came into the league.

He’s found a rhythm as a playmaker, has continued to be a microwave scorer and, above all else, has not been pigeonholed.

“Mike lets me be me, man. He just lets me go out there and play my game. He don't try to limit me to things,” Monk told Basketball News. “He'll show me when I miss somebody on the kick-out and things like that, but he doesn't limit me. I've been like this my whole life. I played point guard before I went to Kentucky, so I've been handling the ball for a little bit. So it's just him giving me the opportunity.”

Everybody knows he can put the ball in the bucket. It’s how Monk is doing it, and of course, what he’s doing to involve his teammates. While he has been more involved in pick-and-roll actions, it’s the handoff possessions that jump off the page. With Domantas Sabonis at his disposal, Brown has doubled the average amount of those per game (1.42) from Malik’s time in Los Angeles (0.71), per InStat.

Getting him moving on curls toward the ball and similar plays has resulted in the sixth-year guard putting it on the floor and naturally getting to the rim, or dishing it off to the next man for a better look.

“First side, the defense is great. Second side, they relax a little bit. Third side, they're relaxing more. So we just try to move it, move the defense as much as possible,” Monk explained. “But they can't help off me as much 'cause I can shoot. They can't help off of Domas that much because he's a big threat rolling. So whatever they do is gonna be wrong, and I've just been making the right reads this year.”

Candidly, Brown made it clear that he will not hesitate to pull Monk aside during those not-so-good moments too, as the 24-year-old is simultaneously turning it over twice a night through 24 games.

“When you have a guy that's as talented as he is, he's gonna take some risk,” Brown said. “He knows if he makes a mistake, I'mma yell at him, I'mma get on him, I'mma coach 'em. I said, 'Come on, you've been around me long enough where sometimes you've gotta let crap go through one ear and out the other. I know I'm the one on you, but that's how you've gotta survive in this business. That's how you thrive in this business. I gotta coach you and I will, but sometimes if you feel like you can make a play, go make a play.' And so, he knows that he's got that support from me, and vice-versa.

"So I think when a player feels that and really believes it, it just gives him more ability to be himself, which is go make plays for himself and others out on the floor.”

“I mean Malik, his energy is vital for us,” Barnes said. “There's some players who come in this league and... you can't necessarily put them in a role, you can't put them in a box. You kinda just roll the ball out there and pray it goes well.

“And he's one of those guys that, for us, we just wanna give him just ultimate freedom, play through his mistakes. He brings so much energy for us, just a different look to our second unit. And I think that has become contagious.”

Monk is at his most dangerous on fast breaks. He likes to push the pace “because we know a lot of teams don't like to get back in transition,” and averages 1.24 points per possession in those scenarios.

The vast majority of his rapid play comes when he’s playing alongside his friend, De'Aaron Fox. Before teaming up on the Kings, Monk and Fox were also backcourt partners on the Kentucky Wildcats in 2016-17. Monk has passed to him more than any teammate by far (147 times).

And together, they play at the highest pace on the team (108.21) — a mark that ranks 10th in the NBA among duos with at least 200 minutes combined. As far as Monk is concerned, he and Fox have picked up where they left off in Lexington.

“He was a big part [of me coming to Sacramento] 'cause we're so comfortable with each other and we know how to play off each other,” Monk said. “Yeah man, it's been working out for me.”

I’m still thinking about this pass from Malik Monk to De’Aaron Fox. pic.twitter.com/UNFLFRwkba

On the opposite side of the coin, Monk has turned up the defensive pressure while sharing the floor with Sacramento’s tenacious stopper, Davion Mitchell. In fact, he and the man they call “Off Night” own the Kings’ best defensive rating on the team (99.5) — the only duo allowing fewer than 100 points per 100 possessions.

“Ah, that's hot,” Monk reacted when Basketball News told him. “I try to give Davion a lot of confidence, man, because he's the head of the snake, 'cause he's the point guard. He usually guards the best player. So however he guards is how the rest of us is gonna feed off of that. And I try to tell him that every game, every time we're on the court. So he just makes me go up a level. That's why I just try to force that [message] to him and I think that's why it's working for us.”

A key cog in the bench bunch alongside him, Chimezie Metu has enjoyed the attitude Monk has brought into the locker room and on the floor.

“He's great to be around. High energy. He's going out there being vocal, kinda keeping everybody's spirits up and it's just been great having him around,” Metu told Basketball News. “Personality-wise, he's kind of the guy that's been gluing everybody together. I feel like he has a great relationship with everybody on the team. Yeah man, he's fun to be around and fun to play with.

“It's been fun playing with Malik and Davion and TD (Terence Davis) and also Trey [Lyles] at times. I feel like during practice and stuff, we're usually like the second unit that kinda does everything together, so we're always laughing, joking. But I think at the end of the day, we understand the task at hand because I feel like our job is to either keep the lead going or give us the energy to bring us back into a game. So either way, we have to have high energy at all times. I feel like we've been doing a great job of that.”

Brown has his own way of describing Monk’s effect on his ball club.

“You know, he's a free spirit. Malik is what I call a connector,” Brown said. “He just brings people together and he uplifts people all the time. He talks to everybody and he jokes with everybody, he touches everybody and everybody on the team has respect for him — not just for him as a person, but also they know that when he speaks, he knows what he's talking about because he's right a lot of the times.

“Malik is what I call a connector — he just brings people together. He uplifts people all the time … and everybody on the team has respect for him.”

Coach Brown on what @AhmadMonk brings to the squad on and off the court 👑 pic.twitter.com/bwEuauVWBc

“He's a talented, talented basketball player, and sometimes, especially when they're young like he is — he's young, but he has an old soul and he understands what's right, what's wrong and the right way to do things and all that.”

Altogether, the 24-year-old has found a niche and a comfortability with this Kings team. A lot of that has to do with a consistent role with consistent minutes, which he has found the last couple of seasons between L.A. and Sacramento as opposed to the sporadic nature in the past when he was with the Charlotte Horntes.

From a young age, Monk has always been passionate about his apparel. He told Basketball News that when he was a kindergartner living with his mom, his older brother Marcus — a former NFL wide receiver who played for the Chicago Bears — always rocked BAPE clothing line. Malik latched on to style because of that and has kept up to date with the latest fashion ever since.

On Friday, Monk came into Rocket Mortgage FieldHouse wearing a fuzzy skeleton sweater with black paints, matching shoes and some bling to top it off. Pregame, his teammates tried to figure out what brand he was going with.

“Look man, he spends a lot of money on his clothes. They better look good. That's all I'mma say,” Metu said with a chuckle.

“If my fit not as up to how I want it, man, I feel like I'll go out there and be a little down. But I haven't done that this year. All my fits been pretty decent so far. Yeah man, it's always 'look good, feel good, play good,'” Monk said.

Clearly, Malik Monk has been a positive influence in Sacramento. It’s a big reason why they’re in the thick of it in the Western Conference — and that doesn’t seem to be changing anytime soon.