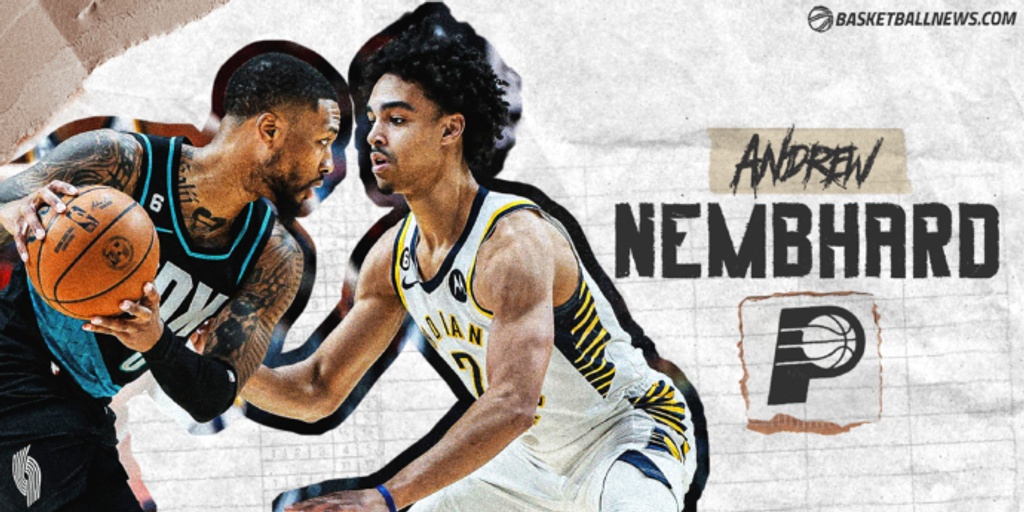 Real-deal rookie: How Andrew Nembhard has already wowed the Pacers

After calmly knocking down a buzzer-beating three to send his team to victory over the Los Angeles Lakers at Staples Center, Indiana Pacers rookie Andrew Nembhard received a wave of praise and compliments all around. But the strongest words came from his head coach.

“He’ll go down as a top-12 or 15 pick when it’s all said and done,” Rick Carlisle stated on Nov. 28 about the No. 31 overall selection this past summer. “It’s where he should have been taken.”

Eight days later at Golden State, following Nembhard’s career-high 31-point, 13-assist effort against Stephen Curry and the Warriors, Carlisle doubled down: “I’m elevating that to top-10. He really is a special player.”

On Friday morning in Cleveland, Nemhbard shared what he thought of Carlisle’s commendable comments.

Nembhard has plenty of reasons to believe in himself, In December, he is averaging 11.0 points, 5.1 assists and 4.0 rebounds to go with 1.2 steals over 10 games with .489/.366/.778 shooting splits — nothing to gloss over for a first-year player. However, it’s not about flashy statistics with him.

The very reason he got on the court in the first place is because of what he showed Indiana on the defensive end during training camp and preseason. Then, when Chris Duarte got injured in early November, the team looked his way to step up — and he’s continued to reward that decision from that point on.

“As we got into the year, he got tossed into a couple of games early,” Carlisle said. “He had tough matchups; the first time we played Miami, he guarded [Tyler] Herro some and was able to stay in front of him and contest some of his shots well.”

That game was a sign of things to come. Since then, Nembhard has been tasked with going head-to-head with the NBA’s best. Have a look at a sample of who the 22-year-old has matched up with the most and how they’ve fared, per NBA.com’s matchup data:

“It's exciting man,” Nembhard told Basketball News of the Pacers’ trust in him on that end. “Personally, I've got so much confidence in my game that it's just like, I felt like I could do that. I like to compete, so that's something I just like to bring to the game every day, and I'm super happy that they've just allowed me to kinda do that and help the team in that way.”

“He's a guy that if you watch him within the defensive system, he always seems to be in the right place,” Carlisle said. “He's very aware and does a good job of blocking out. He does a good job of chipping blockouts, which means going and helping a big guy. Like [Friday], when Myles [Turner] is blocking out [Jarrett] Allen, his job is to go be the second guy, to try to take away his athletic step and stuff like that. And Drew just naturally does that stuff.”

Backing Carlisle's words, film savant Caitlin Cooper of SB Nation's Indy Cornrows provided another example of the little things that Nembhard does on that end.

When the screener gets close enough to ghost screen, he makes them actually set the screen. That physicality makes the action more static and easier for Mathurin to navigate with the switch. pic.twitter.com/Q9B8JYkPro

“I'm just like beyond impressed with the poise and maturity that he showed,” Pacers veteran point guard T.J. McConnell told Basketball News. “Asking him to come off the bench and then start, play a certain amount of minutes and guard the best players while you're out there, usually you don't have enough energy to do it on both ends, but he's done it... unreal. He's been unreal on both ends this year, and it's been a joy to watch."

According to McConnell, what Nembhard is putting on display now is what he saw over the offseason in the first few games of pickup. Admittedly, the 30-year-old didn’t know it would translate for him this way, this seamlessly.

“You kinda get so used to playing against someone, then you saw him do it against other NBA guys and do it consistently. When he just continued to do it, continued to do it, I'm like, 'This dude is the real deal,'” McConnell said. “You saw it from the beginning, but you didn't know how it was gonna adjust from an NBA season [standpoint], and he has hit the ground running and hasn't looked back. Just very proud. I see the work he puts in and the type of guy he is. Extremely happy for him.”

Though tending to use the trusted pull-up game he excelled at as a high schooler and an underclassman at Florida, Nembhard has started to become a ready catch-shooter over the last few years at Gonzaga and, now, with the Pacers, converting on a healthy 36.4% on the season overall despite some inconsistencies in December. At the very least, he’s a threat, which allows him to drive off the catch and go from there.

Nembhard’s also moved the ball with ease, constantly making touch passes and heady reads. It helps that he’s had reps as a handler and away from the ball already this early into his career.

“I think it's similar honestly in terms of where I get the ball,” Nembhard said. “I'm still just playmaking off of our pace, stuff that we still do. So similar touches, just not bringing the ball up as much. Just not directing as much.

“I think the way it's been so far has been good for me to just ease into getting comfortable on the court. I don't think I need it to be the primary guy right off the bat just 'cause that's tough as a rookie. I think they've allowed me to kinda grow and develop and slowly get to the point where I feel comfortable being in that primary role at times.”

And to that point, Nembhard has been right at home with these fast-and-furious Pacers, who boast the league’s fifth-highest pace at 102.26 possessions per game.

“I think I've been a guy who's been able to play well in transition because of my assist-to-turnover ratio,” Nembhard said. “I feel like playing fast has just always been something about my game that I've succeeded at, so it's natural for me. I think for us, a young team, I think with our energy and our effort, it plays into our strengths.”

(Per Cleaning the Glass, his 1:29 assist-to-usage rate is in the 95th percentile among his peers in the league, additionally, and his 117.3 points per 100 shot attempts illustrates his efficiency.)

Nembhard’s fellow rookie Bennedict Mathurin is garnering rave reviews as a real-deal Sixth Man of the Year candidate, and Tyrese Haliburton has upped his game to another level where he’s leading the entire NBA in assists. Together as a trio this month, they’ve combined for a net rating of plus-23.7 in 76 minutes.

“I think me and Hali are good at playmaking and just like reading the game, and I think Benn's an aggressive scorer who's just confident in himself,” Nembhard said. “So we look for him. I think it's easy for him to play with both of us. I think we just flow well together just 'cause of our mix of skill and talent.”

For these two rookies to be developing and producing at the same time is one thing, but to do it and rack up W’s on a competitive, 15-win Indiana ball club that few on the outside saw coming is remarkable.

“Man, it's exciting honestly. Personally, I love winning,” Nembhard said. “Ain't nothing like winning in basketball to be around that team environment. So that's a big plus, and I'm excited we're doing what we're doing so far. It's always early... But, I'm super excited I've been able to get on the floor and just help impact that winning."

"Got a lot of respect for Mathurin and Nembhard, two rookies who really like, talk. Like, they’re there. Like, they make their presence felt," Donovan Mitchell said postgame Friday. "...Nembhard’s had pretty big games against some good teams."

“This is obviously probably the youngest locker room I've been a part of, and one of the best, if not the best. Just the positive energy each day and the youthful energy that everyone brings,” McConnell added. “I'm only 30, so when I say youthful energy, it's just 'cause everyone else isn't as old (laughs). But it's been great. [Through the] ups and downs of a season, we've stuck together. And I think that not a lot of people expected us to have the record we do now, and I think that's because of the tightness of the locker room.”

As Carlisle made his aforementioned top-10 comment, he described Nembhard as “old school, but new-school.” Basketball News followed up on what he meant by that.

“Well, he's tough, physical. He plays an efficient game,” Carlisle explained. “He has a natural aptitude for moving the ball and finding people and just getting to the pass that leads to the hockey assist. And he just has a real, pure intellect for the game; that's the old-school side. The new-school side is he's probably on social media like everybody else (laughs).

“But he understands the style of today's NBA. At Gonzaga, they did some things as a team where, a lot of times, they played an NBA style. They played up-tempo, a lot of ball movement, not a lot of play-calling — play the game, play with each other, play random, find the best shot — all that kind of stuff.”

first bucket of the night is an and one by @AndrewNembhard. 💪

Month-by-month, Nembhard has gotten better. You can see the jump happening in both the box scores and on the floor in general.

And maybe of the utmost importance, he is learning what life in the NBA is like.

“It's just so much talent in this league,” Nembhard said. “You've gotta bring it every night. You could be playing against their best five, (but) the next six are still NBA players who can hoop. So it's like, there's not a night off in this league. Any team can beat anybody with a certain attitude, a certain demeanor every night.

“I really don't know how to nitpick his game. He's been unbelievable on both ends,” McConnell said. “Maybe one thing is just try to stay out of foul trouble. But when you're guarding the best players, it's impossible not to pick up a foul here and there. But like, on the offensive and defensive end, he's been damn near close to perfect, and that's asking a lot of a rookie. He definitely doesn't play like one.”