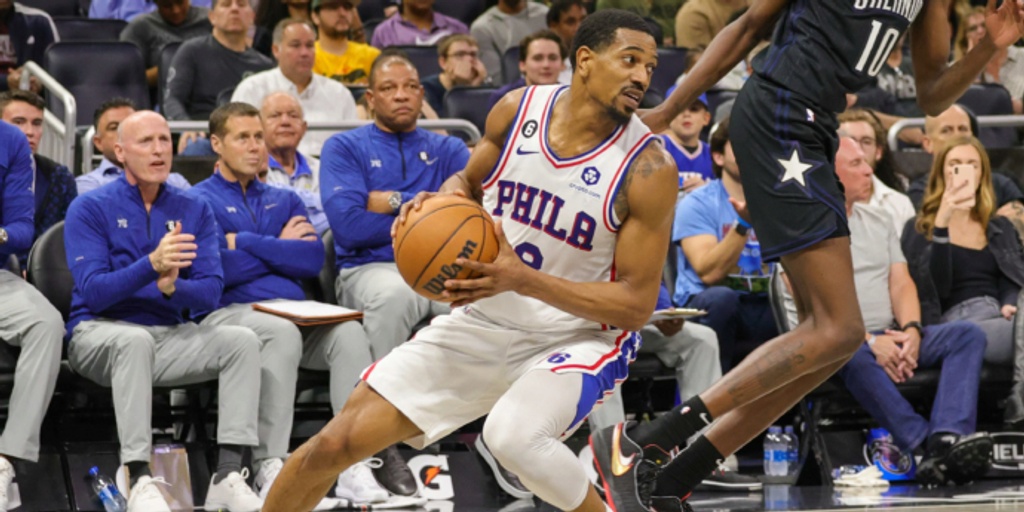 On his third team in five seasons as an NBA pro, De’Anthony Melton has made quite the first impression on the Philadelphia 76ers organization that traded for him on draft night this past June.

“I think De'Anthony's a very easy guy to play with,” Sixers head coach Doc Rivers said Wednesday in Cleveland. “He doesn't talk a lot. It's pretty quiet, but [he] competes. And he does, he just plays right. He defends. And I think guys who defend always have a little more longitude to do whatever. Guys respect that.

“You want to get respect in a locker room? Go stop somebody and you'll get it, and I think De'Anthony has that.”

The truth is that Melton has always had that. Constantly seeking out the basketball on the defensive end of the floor, he is like a free safety on fastbreaks and a cornerback in passing lanes, baiting the opposing team into a cross-court pass or an ill-advised decision. That’s because his first interceptions came on the gridiron and not a hardwood floor.

“I played football my whole life growing up. So yeah, just doing that, I've had instincts,” Melton told Basketball News at Philadelphia’s morning shootaround. “I don't know, that's just who I am. I played everything — receiver, QB, running back, safety, D-end and corner.”

Melton is a hound with a nose for the ball, which explains his NBA-leading 3.8% steal percentage. On top of that, he ranks second in the league with 2.2 steals per game and is tied for third among his peers with 3.7 deflections per contest.

While those are impressive numbers, it's what Melton does with his activity that catches your eye. If he doesn’t rip it away from his man, the 6-foot-2, 200-pound guard battles for a rebound among taller, bigger guys. Even just getting a hand on the ball and tipping it out to a teammate helps.

“It's important. One of the most dangerous shots is an offensive-rebound three,” Melton said. “So limiting those is important, especially when you play defense for 20-something seconds, then you're mad that you gave up a rebound and now you've gotta go another 14, you know what I mean? It's just toiling on your body.”

And when he succeeds in retrieving the rock via a board or swipe, De’Anthony launches it down the floor without hesitation as soon as he sees a teammate streaking in transition.

More often than not, it turns into two points.

“It's just something I've been doing from the beginning of my career,” Melton said. “Just trying to get the ball ahead and get an easy basket, especially when you limit them to one shot. A lot of times, you've got the big down here, so it's not a shot-blocker at the other end of the floor. Having a guard get the rebound, it's important 'cause you can throw it up, you could push it early and just get easy baskets.”

When asked about the most valuable thing that he brings to the Sixers, Melton pointed to those instincts and his “ability to play hard and do whatever it takes to win the game.”

Adding to that, providing depth to an ailing roster has been crucial. For one month, Philly’s been missing All-Star guard James Harden because of a strained foot; luckily, he's due back soon. Making matters more difficult, Tyrese Maxey hasn't played since Nov. 19 due to a similar injury. His return is still a couple of weeks away.

When Melton initially came in, he was spelling both of them alongside fellow fifth-year guard Shake Milton. But with their teammates on the shelf, the two have taken their blossoming relationship from the bench to the starting five.

“I think it's been huge for both of us,” Melton said. “Even Shake, you see his growth and his confidence grow through these last few games. But just staying aggressive and being confident, I think that's the biggest thing that you can have in this league. When you have those two things, you've just gotta rely on your work.”

As a duo, Melton and Milton have looked out for one another and found ways to impact the game in different ways. Shake is averaging nearly 22 points per game on 56.3% from the field over the last seven contests, and has knocked down 13-of-20 shots featuring a dish from Melton. According to NBA.com, De’Anthony has passed to him 109 times during that span, assisting on nine of his field goals.

“We constantly have conversations. I'm constantly talking to him in terms of my game and his game and what I've seen he can do too,” Melton said. “So just constant communication, open door between us. What we see, what's open, what's not. What do I see, what does he see, how we feel like they're playing each other [defensively].

“Just talking to each other. It could be calming each other down, picking each other up. Just being there for your teammate, that's the most important thing. We want to go out there and play hard and play for our families.”

Shake Milton and De'Anthony Melton combined for 25 of the Sixers' 52 1st Half PTS ...

These boys understand the assignment, hear me??? pic.twitter.com/iqFiODhccc

As for his own scoring, Melton’s been in a bit of a shooting slump as of late; still, he’s knocking down 35.5% of his threes and 37.7% of his catch-shoot triples on the season. De'Anthony also recorded double-figure scoring games in each of his first six starts, averaging 4.8 rebounds, 4.2 assists and 3.5 steals a night over that stretch.

Noting the experience they’re gaining together presently, Rivers envisions the one-two punch of Melton and Milton for his rotations when the Sixers are fully healthy.

“I think it'll be huge later,” Rivers said. “It'll give us opportunities to put second groups out on the floor without any of the key guys on the floor, and that's something we were not doing early in the year. There's always something [positive] that happens when injuries like this happen, and that may be one of 'em.”

Coming from the Memphis Grizzlies, Melton was already used to playing with a superstar in Ja Morant. In Philadelphia, that remains unchanged with Joel Embiid.

At the same time, one’s a point guard and one’s a center.

“It's a lot different 'cause now it's like the double [team]'s not coming from the top, it's coming to the bottom. And he's just so dominant and he can get almost any shot he wants. It is different, but... it's Joel Embiid, it's him time,” said Melton, who will come back to Memphis with the Sixers on Friday evening.

Coming into training camp, Embiid voiced his desire for Philadelphia to be the top defense in the NBA. To this point, he and his teammates have for the most part lived up to that billing, and it’s even more impressive because of the adversity the squad has faced with guys out.

Next man up turned into next men up, and those men have done their jobs.

“It's important for us because, I mean, Jo said it at the beginning of the year — we're trying to become the No. 1 defense, and it's gonna help our offense,” Melton said. “It's gonna make our offense a lot easier, getting easier buckets, so now, late in the game, we've got to our go-to guys and they're fresh.”

De'Anthony Melton is still in an adjustment period with his new ball club, especially with the injuries piled up. Thrust into the starting lineup and playing over 33 minutes a night since, it is the highest workload he’s seen consecutively since becoming an NBA player.

“I think that it's something I'm getting used to. I feel like my role, it's changed a little bit, but not really though,” Melton said. “They want me to be aggressive either way, so, whatever comes with that, they feel like and have the confidence in me to make the right play.”