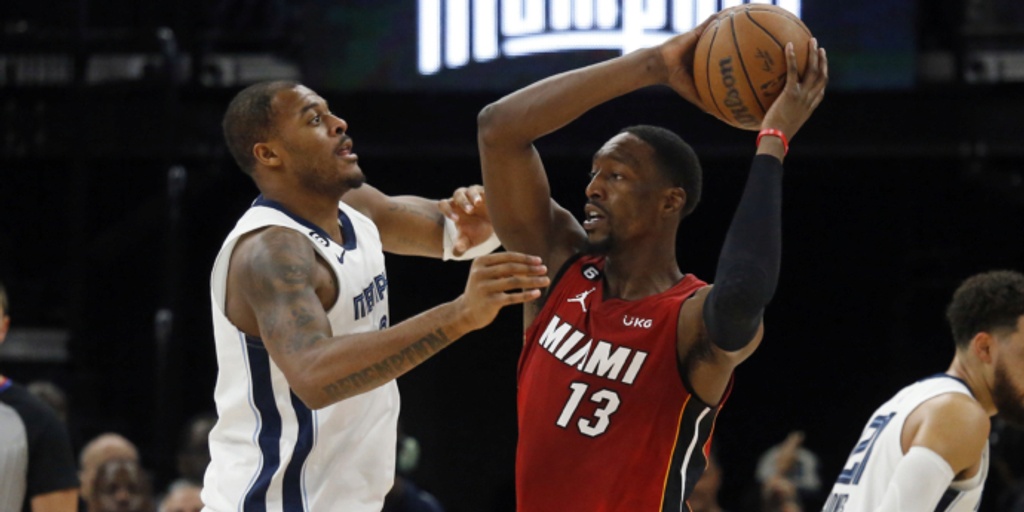 I don't think Bam Adebayo is having the surge he's having right now without that Milwaukee Bucks series.

Not that Bucks series that resulted in a second-round Miami Heat upset over the Milwaukee Bucks during the Orlando Bubble. (A series where Adebayo more than held his own against Giannis Antetokounmpo — in addition to The Wall — while Jimmy Butler continued his Clutch Tour on the other end of the floor.)

I mean the ugly one. The rematch in 2021. It was a nasty 4-0 sweep in favor of the Bucks, a result achieved behind a stout defense that made the Heat uncomfortable in the half-court.

Butler (rightfully) got most of the attention. After leading the team to the NBA Finals the year before, he averaged 14.5 points while converting 30.6% of his twos and 26.7% of his threes. The Bucks famously placed Giannis on Butler to neutralize his drives, and Butler infamously averaged fewer points than Bryn Forbes in the series.

But Adebayo wasn't much better, averaging 15.5 points while only making 45.6% of his twos. Two things stand out to me from that series. At the top of the list was how uncomfortable Adebayo was against Brook Lopez. Lopez hung back in a drop, and essentially dared Adebayo to beat him in the intermediate area.

Only 28% of Adebayo's shots came at the rim in the series, a wild departure from where he was in the regular season (35.3%). And while Butler struggled to generate clean looks, Adebayo looked tentative with the looks he was given. Heat fans can probably still recount specific possessions where Adebayo either pump-faked ghosts or passed out of scoring windows altogether.

The quiet part — he hit the shots at a solid clip when he did take them. Per Second Spectrum, Adebayo drained nearly 46% of his shots between 6-12 feet. Push shots, floaters, short pull-ups and leaning fades were all part of the Adebayo package, even if it felt like he could've doubled his volume in the series.

It was instructive, though, because it once again highlighted how Adebayo would have to win to take the next step as a scorer.

Adebayo is an active driver with a high free-throw rate to boot, a lurking threat as an offensive rebounder and a high-flying lob threat when those pathways are available. As a full-time 5, he's also at a size disadvantage most of the time. Against top-tier matchups — Boston (Al Horford, Robert Williams III), Milwaukee (Giannis, Lopez), healthy Philly (Joel Embiid) — he's going to have to win against size.

Adebayo's counter of choice has been to live in that aforementioned 6-12 feet area, becoming more comfortable, more deadly. It's the meat and potatoes behind a career-year scoring season (21.2 points), and it's certainly the main course behind his most recent run of play.

Since Thanksgiving (seven games), Adebayo is averaging 27-and-9 while converting an absurd 59% of his twos. Of his 125 two-point attempts, 66 of them (52.8%) have been shots between 6-12 feet — easily the highest mark in the NBA. In fact, I'll pause so you can laugh at the leaderboard.

Nobody has come close to the volume Adebayo has showcased. A 50% clip is wild considering the volume, and the fact that the league average on shots in that range is roughly 42% this season, per Second Spectrum.

From there, it's worth parsing out how real this is. Here are his numbers on shots between 6-12 feet since becoming a full-time starter.

The pre-Thanksgiving number is low, but you may be able to shoot some bail based on Adebayo's offensive context and some poor luck. Per Second Spectrum, Adebayo underperformed his expected efficiency in that range by nearly six percentage points (expected 44.1%) before the holiday. He may not be a 50% guy either, but it looks like we're witnessing some positive regression right now.

More important than the numbers is how Adebayo is being treated. He's still largely getting single coverage right now. The degree of difficulty with some of his shots are firmly in tip-your-cap territory for defenses.

It is worth noting that defenses have started sending a little more help towards him when he works toward that area of the floor. Subtle digs, some late contests, more pre-rotating when he gets an elbow catch. Here are some Adebayo possessions (makes and misses) during this stretch:

That added attention matters, as subtle as it may appear right now. It's also worth noting he's seen seven full-blown double teams on post-ups or isolations since Thanksgiving after only having three beforehand, per Second Spectrum. Heat head coach Erik Spoelstra was recently asked about it by wunderkind Brady Hawk of Five Reasons Sports.

"When he's operated in the middle of the paint for so many games, and has been so efficient — with his shooting, attacking, getting to the free-throw line in his sweet spots — of course teams are going to bring a second defender," Spoelstra said.

"That'll be part of his evolution now. He's already a great passer, so that should help us once he starts to get comfortable. Right now, what we're seeing is [help coming] after he makes the move. That's when the second defender is coming. It's not initially on the catch; it's when he goes into his move. That's when he can expect another defender, and now he can go back to his playmaking mode without taking a step back in terms of his assertiveness and aggressiveness."

Spoelstra considers it a compliment that Adebayo is getting this sort of attention. It should also serve as a much-needed complement to the star power of Butler, provided they get an extended run of games together now.

Zooming out, this is what a lot of people were clamoring for with Adebayo — being more aggressive, putting his imprint on the game. It isn't a three-ball, nor are they analytically-fruitful shots at the rim. There's still room for him to generate more efficient offense for himself and others.

Slowly but surely, though, he's looking for his own more often. And that volume is starting to make defenses think more. That's the first step to opening up a new world for him.