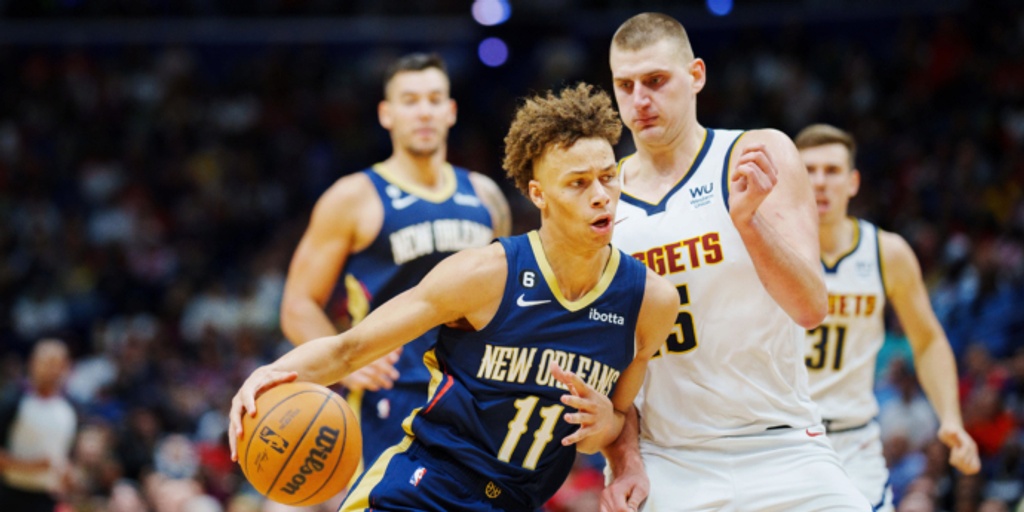 Two quotes immediately come to mind when watching the Denver Nuggets play basketball this season, both coming from their Media Day back in October.

"We understand that you can't be 15th in the NBA in defensive efficiency and be serious about winning at a high level... You look at the two teams in the NBA Finals; they were (No.) 1 and 2."

That trend — the Finals representatives being elite defensive teams — mostly holds true over the past 20 years, with LeBron James and the Cleveland Cavaliers being the exception to the rule.

This absolutely holds true if you filter the Western Conference; the 2000-01 Lakers were the last West team to make the Finals without a top-10 regular-season defense (22nd). They, of course, compensated with the NBA's best offense, headlined by some guys named Shaquille O'Neal and Kobe Bryant. Oh, and they had the best playoff defense by a wide margin that year en route to a 15-1 title run.

The other quote from Media Day comes from back-to-back MVP Nikola Jokic, on the topic of his defense.

"Maybe I can be a bad 1-on-1 defensive player, but I can be a good team-defense player... I think that's how we can plug holes if we have some holes in our defense."

It's a wild thing to hear or read, but it's easy to see where the logic comes from. Jokic has clear strengths defensively — his size, strength, a plus-4 wingspan (and 9-foot-3 standing reach) and quick hands. He also has clear weaknesses —namely his lateral quickness and vertical pop. Within the lens of title contention, building a scheme around Jokic's defensive skill set has been the Nuggets' biggest challenge.

Between the Aaron Gordon trade (2020-21) and recent offseason moves for Kentavious Caldwell-Pope (trade) and Bruce Brown (free agency), the effort has been made to become a deeper, more talented defensive team. Malone said his goal for the Nuggets was to become a top-five defense this season.

Not only has that not happened, but this is also shaping up to be the worst defense of the Malone era in Denver.

(Diehard Nugget fans are welcome to skip this section.)

With Jokic at center, the Nuggets have opted for a more aggressive base coverage against pick-and-rolls. While teams like the Milwaukee Bucks and Boston Celtics play drop coverage — asking their bigs to hang back — the Nuggets ask Jokic to play higher up against screens. He's mostly at the level of the screen, but is sometimes asked to hedge or full-out trap the ball-handler.

This is Jokic's best coverage because of his aforementioned strengths. He's a large human with a solid wingspan and quick hands; naturally, that makes him difficult to dribble around or pass over. There's a reason Jokic is routinely among the league leaders in steals among centers, and has ranked in the 80th percentile or higher in steal rate in five of the past six seasons.

This is generally what the alignment looks like for the Nuggets. 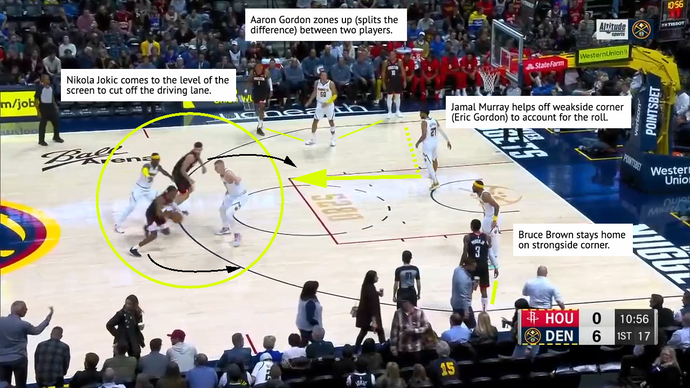 The coverage is of the high-risk, high-reward variety.

There's strain on Jokic and the ball-handler's defender to contain the action up top; if the ball-handler is able to pass early or dribble around Jokic, the defense in trouble. And if the three players on the back end aren't in position, the offense will have easy reads to make, and easy shots to take.

By virtue of the scheme, the Nuggets are able to shape the opponent's shot profile. Per Cleaning The Glass, the Nuggets rank 10th in rim rate allowed, 18th in mid-range rate allowed, and 19th in three-point rate. Not allowing many shots at the rim is a good thing, though being in the middle of the pack in mid-range and three-point rate leaves a bit to be desired. Here's the real kicker: Only five teams allow a larger share of corner threes than the Nuggets.

Funny enough, the Nuggets have been (statistically) solid in their base. Per Second Spectrum, the Nuggets have allowed 0.88 PPP with Jokic defending a pick-and-roll at the level of the screen or higher. That's on par with where he was last season (0.88 PPP) and way better than it was the year before that (0.97 PPP).

What keeps popping for me is how small the Nuggets often are on the back end. Teams have been able to generate good looks by either having Gordon's man run the pick-and-roll, or by spacing him at the wing. Because the Nuggets ask the weak-side corner defender to pick up the roll man, teams are able to create size advantages at the rim.

Oddly enough, the Nuggets kinda miss Michael Porter Jr. on this front. While he (clearly) isn't the defender Brown is, his size could be a valuable asset on those low rotations.

The real issues arise when the Nuggets attempt to toggle between schemes. Remember that 0.88 number with Jokic playing higher up against ball-screens? It rises to 1.00 PPP on trips with him in a drop. In the rare occasion he's been tasked with switching, the Nuggets have bled points (1.5 PPP).

It's worth diving into the drop coverage reps for this team. In theory, they have more room to go conservative because of the added screen navigation from Brown and Caldwell-Pope. In practice, the screen navigation has trended more "solid" than "good," which has put more spotlight on Jokic's ability to navigate the gap in drop. He's often caught in no man's land, oscillating between waving/swiping at the ball-handler to throw off his rhythm and hanging back too far and allowing the ball-handler to lead the dance.

The issues are compounded when opponents throw in two (or more) ball-screens in the same possession. Jokic may defend the first one well, whether he's in a drop or at the level. The second one is dicier. He's either late getting up to the level, or is caught too low in a drop. Add in the inconsistent (or nonexistent) help, and you end up with possessions like this.

Can you tell that the Atlanta Hawks game was perplexing to watch?

Ultimately, Denver banks on its defense to win at the first two levels (perimeter, mid-range) because the team just doesn't have much juice at the basket. When playing aggressively, the Nuggets' help is often small, even when it's on time. And when they aren't playing aggressively, they're dealing with shoddy rim protection between Jokic, this version of DeAndre Jordan, Jeff Green or Zeke Nnaji.

A not-so-fun fact: Literally every Nuggets big man is allowing a field goal percentage over 65% at the rim this season. On the whole, teams are shooting 70.7% at the rim against the Nuggets, the worst defensive mark in the NBA.

It's hard to foresee a big shift coming. They aren't trading Jokic, because duh. But because they have Jokic, they don't have much scheme versatility to play with unless they want to lean more into zone. That generally isn't Malone's vibe, but it's worth noting this is the most zone he's thrown out there during his Nuggets tenure.

Finding a trade to improve the frontcourt defense off the bench could help. The Nuggets haven't defended well with Jokic on the floor (113.9 Defensive Rating), but they've been even worse without him (118.4), and that's with teams shooting better from three with Jokic on the court (37.7% vs 34.3%). Shooting regression could make the disparity look even worse.

Beyond that, it's just on the Nuggets to play better — and get healthier. They've shown flashes of being able to string good possessions together. The personnel is better than it was last season. Consistency, health and a little luck — in terms of shot location and expected efficiency, only five teams are dealing with worse luck than the Nuggets, per Cleaning The Glass — should see the Nuggets improve. A top-five defense is out of the question, but there's a wide gap between top-five and bottom-five.

There's still potential, and time, to find the middle ground.