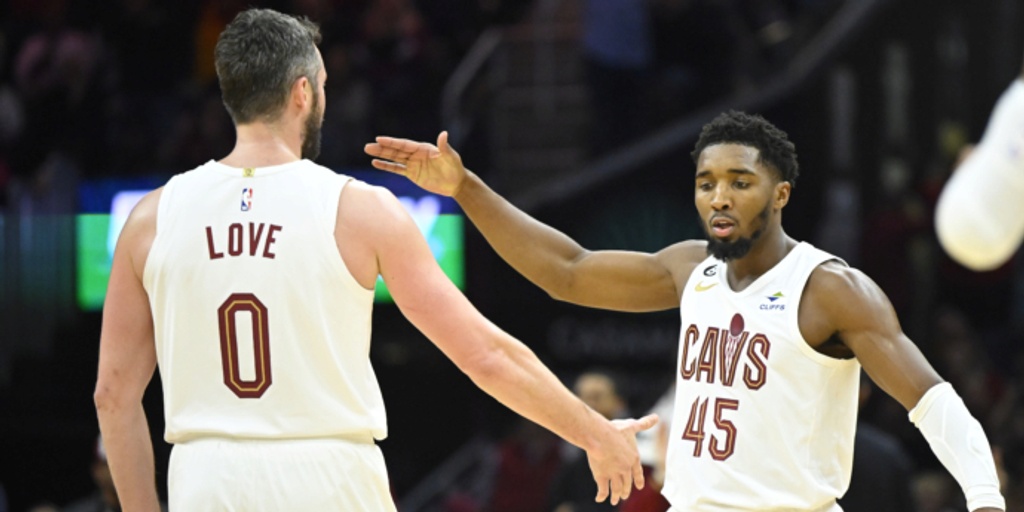 Not even two weeks into the 2022-23 season, everybody in and around the Cleveland Cavaliers organization is head over heels for their superstar guard acquisition.

For the fifth time this year already, Donovan Mitchell scored 30-plus points with his new team on Sunday night — ironically against his hometown New York Knicks. (Spida’s finishing line in the game: 38 points, 12 assists, 3 rebounds, 2 blocks and a steal). But no, that wasn’t — and isn’t — the story.

“I always love playing against my home team. It’s easy to point to the summer and say that but I’m pretty much friends with everybody on that team so it’s always good to play against your guys, and I have nothing but love for them. Johnnie Bryant is like a big brother to me so it’s always fun to go against them,” Mitchell said.

“I wouldn’t say I used it for that. But everybody will probably make that [a big deal]. Not what it is. [I] got nothing but love for those guys over there. When it’s your home team, you want to go out there and play hard. That’s what I was trying to do.”

The real story should be Mitchell’s historic individual start to the season, along with the collective success the 5-1 Cavs are having as a result.

“I took this whole summer to just focus on myself. And believe it or not, through all the craziness — the names being thrown in every trade or whatever — this was my best summer as far as just mentally just being, focusing on me,” Mitchell said following Cleveland’s 121-108 victory. “Physically, being healthy, getting to work. So it started there. We ended [our season] way earlier than I've ended in my career [in Utah], so I sat there. And you sit there and you're angry. You're angry, and then you're not knowing where you're going, so it's just a lot of fuel that you could use. But for me, it's just focusing on Don. How can I be the best player I can be on both ends of the floor? And then, you come into a new situation. Nobody knows what... you really have something to prove to be honest. Like, nobody knows. Everybody kinda heard when you're in Utah, but it's like, what are you doing?

“And like I said, it doesn't have to be 30 every night. It's just being the best player I can be for the group. It's been that way 'cause [Darius Garland]'s been out and when he comes back, continuing to stay at that level and continue to be the best player I can be. But I've definitely taken a step. But like I said, it's only been six games. It's only been a six-game stretch. I know we like to kinda do all this (reacting) stuff early, but it's only October. We're looking to play as late as we possibly can, and that's really where my head is at. But as far as taking that step, that's my goal. I didn't do it last year like I wanted to. I'm just trying to find a way to do it here. And when you have teammates that believe in you, coaches that believe in you, why not keep going?”

Donovan Mitchell: "I think this has been my best stretch in my career, but I gotta keep going."

Spida keeps harping on the fact that it's only October and this is very early being only six games in. #Cavs are looking to play "as late as we possibly can." @basketbllnews pic.twitter.com/LdNgVWA4ix

Cavaliers head coach J.B. Bickerstaff is in awe over what Mitchell has brought to the court and locker room.

“I don’t know all that he was asked to do when he was in Utah. But what I’ve seen from him is a really complete basketball player,” Bickerstaff said following Sunday’s 121-108 victory. “I’ve seen a guy who’s willing to compete on the defensive end at a high level. I’ve seen a guy who’s willing to take challenges on that end of the floor. And I’ve seen a guy who’s been willing over and over again just to make the right pass and make the easy pass, on top of going out and scoring the basketball. I could be wrong. He was in the Western Conference so I didn’t see him, but he just seems… he’s a better, complete player than I thought, just in the times that I saw him and wasn’t able to dissect him. But being around him every day, there’s nothing that he’s not capable of doing on the basketball court.”

When Right Down Euclid’s Evan Dammarell followed up with a question about coaching a player with Mitchell’s offensive motor, Bickerstaff brought up James Harden, whom he coached in Houston in the 2015-16 campaign (as the interim head coach).

“Obviously, their games are different. The shot-making and the creativity blended with the explosiveness. The ability to see the floor. If there are five or six more complete offensive players in our league, I’d be hard pressed to name them all,” Bickerstaff said. "This dude is elite offensively. I don’t know what he can’t do on the floor. Maybe we’ll see something over time. But since we’ve had him, I mean, you guys have seen him, he’s been phenomenal and impressed every one of us every day.”

Kevin Love, the longest-tenured Cavalier and longtime friend of Mitchell’s, joked that Donovan fits in well with the team because he’s a Virgo who shares the same Sept. 7 birthday as him.

“Just the way that he goes about his business, the work that he puts in on his body, on the court, film work, putting in the time with his teammates, just being an all-around basketball player is, I think, inspiring for all of us to get on the floor with him and to want to be better,” Love said. “We already had such a great group, but I think he just elevates us to another place. A guy that has experience, a guy that is a star in this league and is playing some really great basketball right now. And just the way that he does go about his business, we don’t see any signs of him slowing down. He’s been great for us and kind of like you said, you start running out of words because he’s been great. Even in the game that he didn’t shoot too well, he still was able to get it done to us.

“To me, when we got the news that he had been traded here, I was like, ‘Oh man, he's just gonna fit perfect because his personality is great.’ And just he's – I don’t know if this is the right way to say it – but he's just one of us. He’s just all about the right things. I mean, 20 shots for him isn't a lot, but he's putting up 38 points. He's getting to the line. He's shooting 8-for-13 from three. But, even when he's shooting 25, 26, 27 shots, he's still getting everybody involved. He's still playing at a pace that nobody's looking at him and [saying], ‘Oh, man, what is he doing?’ He's very intentional in how he plays. He's very intentional in how he involves his teammates. And the same thing off the floor as well, like he stepped right in and just [was] all about the right things and it feels like exactly what J.B. and the coaching staff wants. He's all for it. He's all about it. We love that. We don't have one bad egg on this team.”

Thanks to some stat hunting by Bally Sports Ohio’s Cayleigh Griffin, here’s some perspective on just how special his start in Cleveland has been: Mitchell is just the second player in NBA history to record five 30-point games in his first six games with a team (joining Wilt Chamberlain who did it with the Golden State Warriors in 1959).

Donovan Mitchell becomes just the second player in NBA history to record 5 30-point games in his first 6 games with a team.

Wilt Chamberlin did it in 1959 with the Warriors, in all 6 games.

Even The Athletic's Tony Jones, who has watched Mitchell grow from the very beginning in Utah, can't help but marvel over how the 26-year-old has played to this point.

Donovan Mitchell is playing the best basketball of his career.

Mitchell is off to a blistering beginning. He’s scoring 32.2 points, dishing out 7.3 assists, pulling down 4.5 rebounds and stealing the ball away 1.7 times per contest to this point. He’s playing damn near 40 minutes a night with Garland sidelined due to a swollen left eye, and producing career-best rates in True Shooting percentage (63.7%) and assist percentage (32.1%) in his absence.

His biggest moments have come in times of adversity and late-game situations. He’s bringing the thunder on every dunk, the smoothness on every jumper and the dedication to make the right decision on both ends of the floor. Simply put: he's making winning plays.

If first impressions are considered a test, then Donovan Mitchell is passing with flying colors.

“That's the one thing I've always preached every season is trying to find ways to be more efficient. And when you hear that, you think percentages from the field, but I'm thinking... Like, I average four turnovers this year. That's unacceptable. I gotta work on that, controlling the game, controlling the fourth, whatever, being the leader. Just trying to find ways to be the most efficient player possible, and I think this has been my best stretch in my career, but I gotta keep going.”