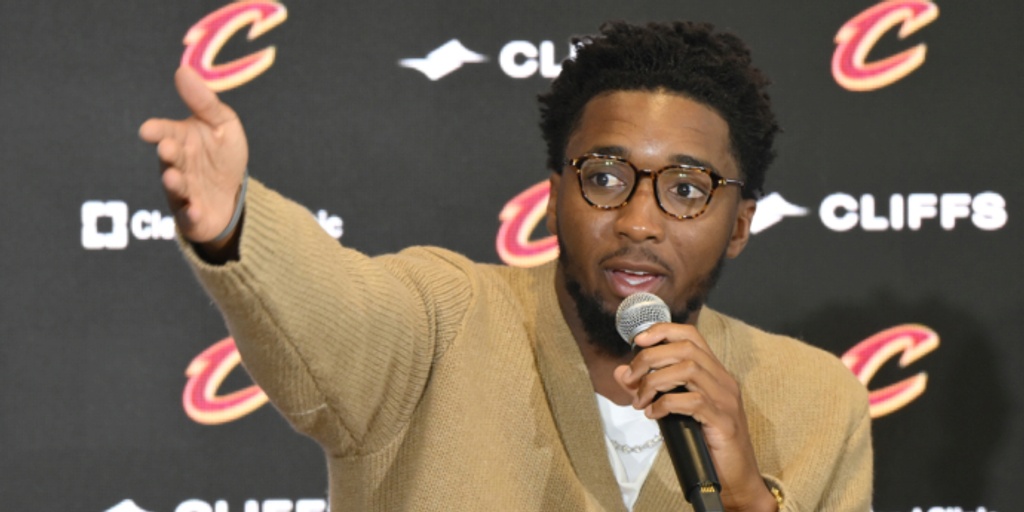 Donovan Mitchell dreamed of the Knicks, but Cavs are best-case scenario

Sometimes, the ideal scenario doesn't unfold the way you hope.

For Donovan Mitchell, the alternative could actually become the best-case solution for his career long-term.

Exiting the Utah Jazz's rebuild has now vaulted Mitchell into a position where he can reap the benefits in spades as the Cleveland Cavaliers' new star shooting guard flanked by multiple All-Star teammates.

During his introductory press conference in Cleveland on Wednesday, Mitchell opened up about the topsy-turvy period where his future was in limbo. Mitchell knew the writing was on the wall for months, but the end result certainly caught him by surprise, as the Jazz tore it all down in a full-scale rebuild. Both Mitchell and Rudy Gobert were shipped off for seven future first-round picks and a number of intriguing young players to develop under new head coach Will Hardy, whose vision is being put together in Salt Lake City.

“Yeah, obviously all summer I didn’t say much. But for me it was once Rudy got traded I kind of saw the writing on the wall. I think we all did. I think we understood we had a good run,” Mitchell said. “I kind of had a feeling that I was going to get moved. I thought it was New York, I’m not going to lie to you all. Who doesn’t want to be home next to their mom? I haven’t lived at home since I was like in the eighth grade, I’ve been in boarding school, it would have been nice.

"But for me, once I found out I got traded and what we’re going into, that trumped everything for me. I’m truly excited to be here, be part of this group, be part of this city. You saw I had the Cavs jersey on when I was like 5 or 6, whatever it was. I was a LeBron fan, but I was a Cleveland fan. My man’s over there (PA announcer Ahmaad Crump) saying Cleveland Cavaliers; I was saying that at the house. It’s crazy how life comes full circle. Being able to be a part of that, between the fire and the intros, I remember the little things, I love playing in this arena. So to be here, I’m truly excited.”

Mitchell's public peeling of the curtain for the first time since his departure brought forth some interesting details. Not only did Mitchell believe he was gone after Gobert’s move to the Minnesota Timberwolves on July 1, but he’s put in the hours of work to rebound from another unceremonious postseason exit.

“Yes and no. I mean, I had a feeling,” Mitchell said of his exit from Utah. “You guys (the media) do what you guys do and there's always articles about it, about what could happen. No matter how much you try to ignore it, I'm not gonna be naive; we all have phones, we have technology, we have Twitter, we have Instagram. So we see it. But that wasn't a thought during the year. After we lost, that wasn't a thought for a little bit. Pretty much every question after we lost, I really wasn't thinking about it.

"But for me, I came into the summer... the last season for me wasn't my best. And no matter what situation, no matter where I was at, not matter how we were gonna go about it, I had to come back and be the best version of myself and just put that work in. Left the season healthy; I came in, my ankle's feeling good, and the thing for me, that was just a blessing itself being able to come into a summer ready to go. Obviously, it happened and things change, and I'm blessed.”

Donovan Mitchell candidly said he thought he'd end up home in New York this offseason, but when he found out he was heading to the up-and-coming #Cavs, he "couldn't be happier to be here." @basketbllnews pic.twitter.com/QHWBPBsw2a

With the Knicks always out in front of the Mitchell sweepstakes, the New York native was already having visions of playing inside Madison Square Garden for years to come. A homecoming for Mitchell remained at the forefront of his mind as he awaited his true fate, but the process leading him to an even more stacked roster with long-term sustainability instantly washed those feelings away of not ending up a Knick.

“Yeah, so I honestly had no idea," Mitchell admitted. "AB (Mitchell’s agent Austin Brown) called me on a Wednesday and said, 'You’re going to Cleveland.' And like I said, my reaction was what it was. But all summer I really didn’t say much, I just kind of let you guys do what you guys do and I thought for sure I was going back home, I’m not going to lie about that.

"But when I found out where I was headed and who I was playing with, the group, the team, the coaching staff, I couldn’t be more happier to be here, and be a part of this organization and be part of this group to join each and all of those guys, the attitude and I’m truly excited about it...

Now forming one of the most well-balanced starting units in the East, Mitchell and the Cavaliers are poised to make serious noise in 2021-22 and beyond. Cleveland knows the risk it took shipping off control of its drafts to Utah through 2029, but the investment into its young core adding in the star was too good to pass up on. A three-year recruiting pitch to Mitchell is well underway, and the win-loss results will be monitored closely until his player option decision arrives in 2025.

Until then, Mitchell knows what lies in front of him. This is a golden opportunity to boost his stock and become the missing element to a sleeping giant of a contender.

Now, the fun part starts beginning the next chapter of his career in Cleveland alongside Garland, Mobley, Allen and a roster ready to reach heights he and the Cavs hope could surpass what he accomplished in Utah.