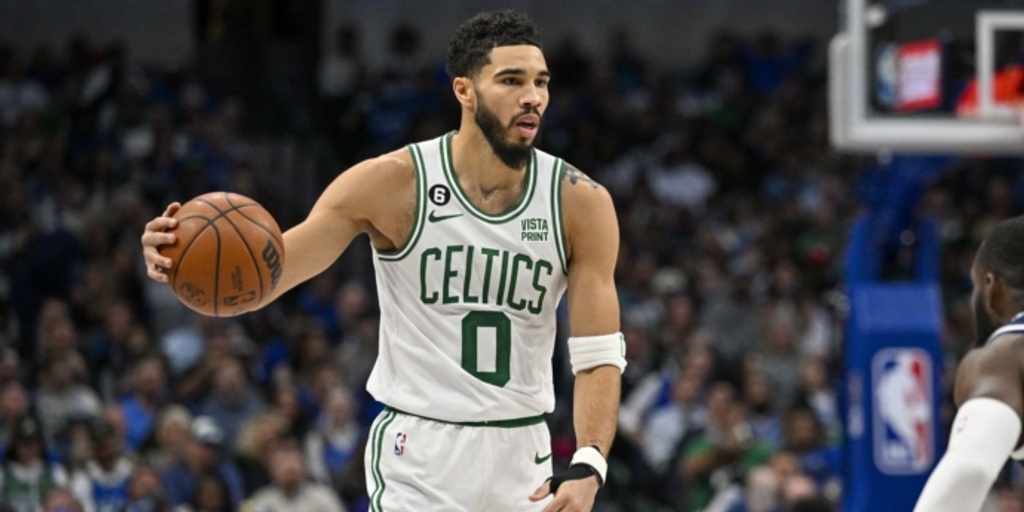 Shortly after the Boston Celtics lost to the Golden State Warriors in last year’s NBA Finals, Jayson Tatum received a text from his trainer Drew Hanlen.

Hanlen knew that the Finals loss would light a fire under Tatum. Over the offseason, Hanlen predicted that Tatum was about to make a big leap and become a “monster.” He saw the work that Tatum was putting in and how much untapped potential he still has.

"I mean, Jayson went on an unbelievable run. He's 24 years old and he's been to three Eastern Conference Finals and one NBA Finals. He's a two-time All-NBA [selection], a three-time All-Star and a two-time All-Star starter,” Hanlen said last summer. “And he's got so much room to grow.”

And for the first time in several years, Tatum had a full offseason to work on his game.

“When we look at the last couple years, he hasn't really had offseasons as much,” Hanlen told me in July. “The one year, they go in the Bubble and they go all the way to the Eastern Conference Finals; we had like two weeks that offseason and then he goes and plays and he starts off really slow. Then, [the next summer], he goes to play with USA Basketball and wins a gold medal; we have a couple-week offseason and he starts really slow. This year, we finally had a full offseason so that he can start the season strong instead of kind of working his way in.”

When asked what things Tatum worked on over the summer, Hanlen mentioned driving through contact, playing through fouls and finishing at the rim.

He also wanted Tatum to be more consistent with his pull-up jumper and three-point shot, particularly early in the season (rather than struggling out of the gate and improving as the season progressed, as he did in recent years).

According to Cleaning The Glass, he's finishing 71% of his shot attempts at the rim this season, which is a career-best. Also, Tatum is drawing a shooting foul on 14.4% of his shot attempts, which is the highest rate of his career (and up from 11% last season). This ranks in the 81st percentile among forwards.

And to Hanlen’s point about shooting well out of the gate, Tatum shot the ball really well at the beginning of the season. In October, he shot 55.7% from the field, 40.8% from three-point range and 90.2% from the free-throw line.

If you compare Tatum’s early-season production in recent years, you can see just how effective he was to begin the season. Here’s a look at his pre-Christmas numbers over the last four years:

As of late, Tatum has struggled to maintain this efficiency. He's been dealing with a bit of a shooting slump (particularly from deep) in recent weeks. Still, Tatum has emerged as a legitimate MVP candidate, with most sportsbooks giving him the second- or third-best odds to win the award.

Boston is determined to make another Finals run, and Hanlen can't wait to dunk on Tatum's doubters if he finally hoists the Larry O'Brien trophy.

“When he lost the Finals, that whole night, I don't think I caught my second wind. Like, it felt like I lost; my gut was turning, and I wasn't even out there playing,” Hanlen told me in July. “It's just, I felt what he felt.

“For about the next hour, I wasted an hour of my time screen-shotting all these notable analysts or notable people with big followings that were criticizing, hating and doubting Jayson, and I put them all in a folder. And I cannot wait to arrogantly send them out when he finally holds up a championship trophy.”