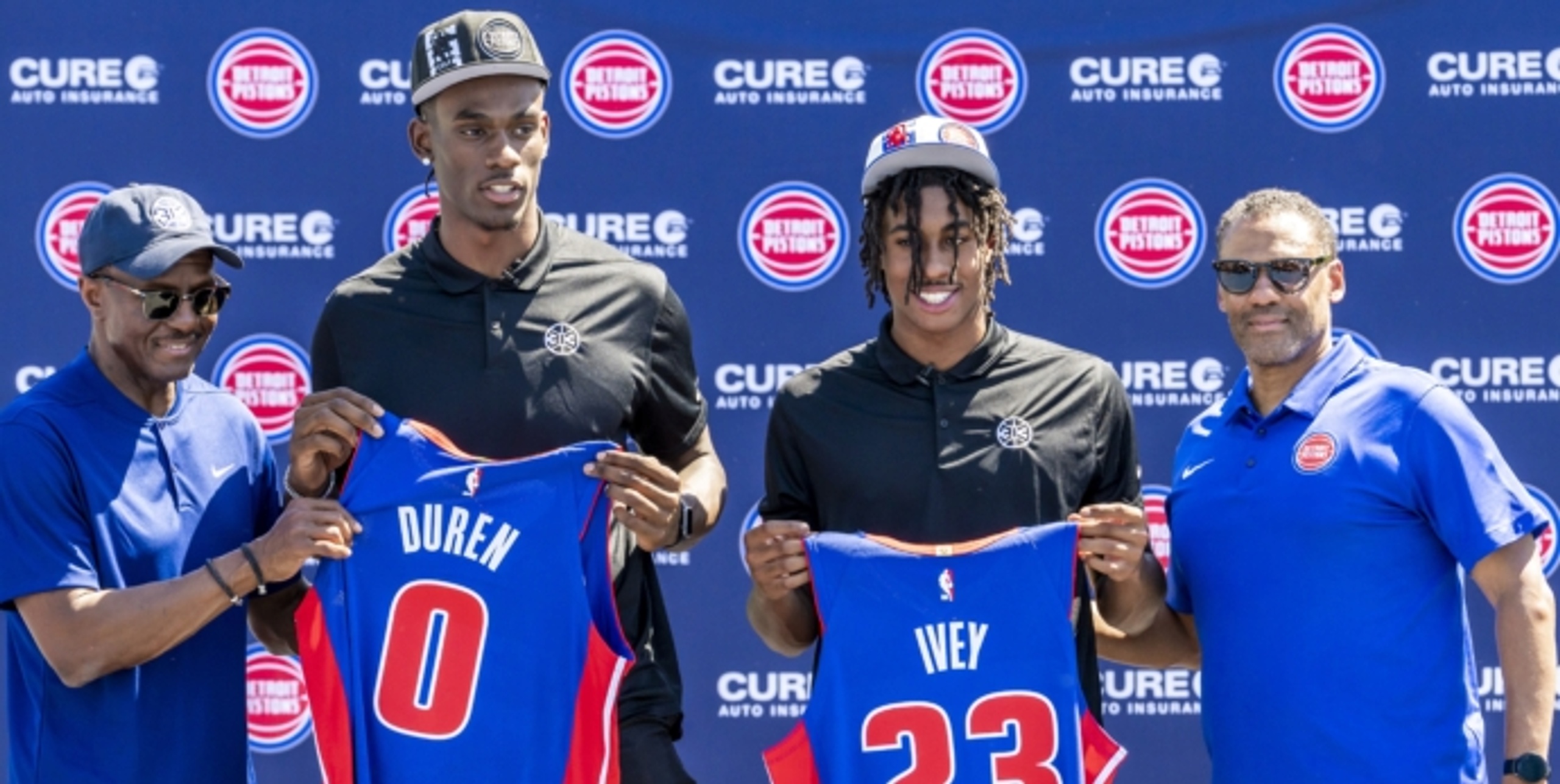 Exiting the 2022 NBA Draft, the Detroit Pistons were widely regarded as one of the biggest winners. Not only did Detroit find a dynamic scoring guard at No. 5 overall in Purdue’s Jaden Ivey, they maneuvered the board to their advantage and secured another lottery pick with Memphis’ Jalen Duren.

After adding Ivey and Duren to an already strong nucleus led by 2021 No. 1 overall pick Cade Cunningham, the Pistons are ushering in the next successful era of Detroit basketball.

A full-on revival is underway in the Motor City, with general manager Troy Weaver calling the shots. The Pistons had an eventful week, beginning with veteran forward Jerami Grant being traded to the Portland Trail Blazers. While the return was a bit lighter than expected, the move created significant cap space and the added artillery was then used to acquire Duren. This calculated move by the Pistons’ front office shows their vision and how determined they are to build the best ecosystem around Cunningham.

Ivey, the Boilermakers' electric lead guard who took the NCAA by storm, averaged 17.3 points, 4.9 rebounds and 3.1 assists on 57.9% True Shooting. With his aggressive scoring mentality, Ivey should form a terrific one-two punch alongside Cunningham in the Pistons' backcourt. Both 20-year-olds will feed off of each other’s best attributes, and they can both play on- or off-ball.

Ivey checks every box as a perfect running mate for Cunningham. Not only will he take pressure off Cunningham, the No. 5 overall pick will keep defenses honest on every single possession. Defenses will have to pick their poison when guarding this backcourt, and the ceiling for this duo is immense.

“Absolutely he blends with Cade,” Weaver said of Ivey. “Both competitive spirits, [and] he’ll help generate easy buckets, play on the second side, be able to create for others on the floor as well. We think it’s a big-time fit... What he brings to the table is he’s got electric speed, and he’ll create opportunities offensively for us because of his speed. And he has the measurables to become a big-time defender. His athletic gifts along with the tenacity he brings to the floor and competitive spirit are things that attracted us to Jaden.”

Although Ivey isn’t from Michigan, the Detroit roots are profound. This is why Ivey was so comfortable ending up with the Pistons, only working out for them and the Orlando Magic during the pre-draft process.

Ivey’s grandfather, James Hunter, played for the Detroit Lions. Ivey’s mother, Niele Ivey, played for the WNBA’s Detroit Shock during her professional career (and is now the head coach of Notre Dame women’s basketball team). Ivey’s father, Javin Hunter, played high-school basketball at Detroit Country Day School as well. Ivey was born and raised in Indiana, but given his family's history in Detroit, the Pistons treated his arrival as a pseudo homecoming — presenting him with each of his relative's Detroit jerseys during his introductory press conference.

During Jaden Ivey’s introductory press conference, the Pistons presented him with jerseys his grandfather, father and mother wore during their playing days in Detroit ❤️pic.twitter.com/efu8dHOSJH

“When you’re trying to construct your team, you want to make sure you fill certain holes,” Weaver said. “First of all, [Ivey] is a tremendous young man. Tremendous family background. Strong Detroit roots. Obviously, his grandfather was a Detroit Lion. His grandmother still lives here, has a clothing store. So, it’s a homecoming for him."

In the modern NBA, elite guard play is what wins you games at a consistent clip. Pairing Cunningham with Ivey could quickly become a mismatch nightmare for opposing defenses, especially once they gain a rapport.

“Versatility, length, athleticism, competitive spirit,” Weaver said of the backcourt duo of Cunningham and Ivey. “Looking forward to watching both of those guys playing together.”

Once the Sacramento Kings decided to pass on Ivey and select Iowa wing Keegan Murray at No. 4, a ton of teams were calling the Pistons about their No. 5 selection. Weaver said he's never experienced that much trade activity at any other point in his career. However, even with strong overtures from multiple teams, the Pistons were not going to pass up an opportunity to pair two potential star guards together for the foreseeable future.

After securing Ivey, the Pistons weren't done. Detroit's front office shifted their attention to adding Duren, who was the cherry on top of a historic night for the organization. In a three-team deal with the New York Knicks and Charlotte Hornets, the Pistons received Duren in exchange for the pick they just grabbed from Portland in the Grant trade less than 48 hours earlier.

Early on, Weaver identified Ivey and Duren as the team's primary targets. In the end, the Pistons' dream scenario played out. For Duren, he had his eyes on Detroit shortly after his pre-draft workouts began.

Duren, who entered this past season as a potential top-five selection, slipped down the board to No. 13 where Detroit took full advantage. When looking over his freshman campaign with the Memphis Tigers, Duren was plagued by super inconsistent point-guard play coupled with consistent off-court distractions related to head coach Penny Hardaway’s job security. Duren still produced amidst the chaos, averaging 12.0 points, 8.1 rebounds and 2.1 blocks on 60.8% True Shooting.

With Detroit, Duren enters a situation where his development doesn’t have to be rushed. Instead, with Isaiah Stewart and Kelly Olynyk in place, the Pistons can allow Duren to develop at whatever pace is best for him.

Adding Duren also throws water on the fire related to Deandre Ayton’s potential fit in Detroit. According to The Athletic’s James Edwards III, the Pistons are more likely to pursue multiple veteran additions compared to focusing on one single splash to cap off a strong offseason. If that’s the case, it might be best to pivot away from Ayton and instead focus on the high ceiling Duren possesses.

When looking at the Pistons’ young core, it’s hard not to feel giddy about their long-term outlook. Ivey and Duren are perfect complementary pieces for Cunningham, allowing him to take the next step forward as the bonafide face of the franchise.

If everything clicks for Detroit, look out for them taking a serious jump forward within the next calendar year. I’m already extremely high on the fit between Cunningham and Ivey, but Duren’s value as a pick-and-roll monster will be felt immediately as well. The pieces are beginning to fall into place for the Pistons, and now patience is the next step of the process with three key building blocks age-20 or younger.

“I mean, we’re trying to build this thing the right way,” Weaver said. “Continue to restore the franchise, so the community and city can be proud of what we put on the floor.”

Detroit is still a few steps away from really hitting the turbo button on their rebuild, but it’s hard to argue with the results as of late. The hardest part of the process is over with Cunningham onboard, and now Ivey and Duren have the makings of real accelerants who can make an impact as early as this season.

Right now, the Pistons' momentum is hard to ignore. At the press conference, the franchise handed out shirts that said "RESTORE," which wasn't lost on their recent additions.

“Detroit said it about 'RESTORE,' I think that’s the biggest thing. We want to restore, get the city of Detroit back to winning,” Ivey said. “That’s something I want to get to. I want this team to win. I’m just gonna do whatever it takes to win, and having a guy like Jalen (Duren), Cade (Cunningham), Saddiq Bey, Isaiah Stewart — those guys want to win. I feel like I can help a team win.”

Armed with ample amounts of salary flexibility this offseason, the Pistons have countless scenarios to improve their roster. If it’s not chasing Ayton on a max contract, Michigan native and current Charlotte Hornets wing Miles Bridges certainly makes sense as a potential free-agency target to slot in as a starter.

Beyond this offseason, the Pistons have flexibility over the next few seasons as they develop their young stars and wait for them to break out. Once that occurs, look out for the Motor City Revival to be in motion