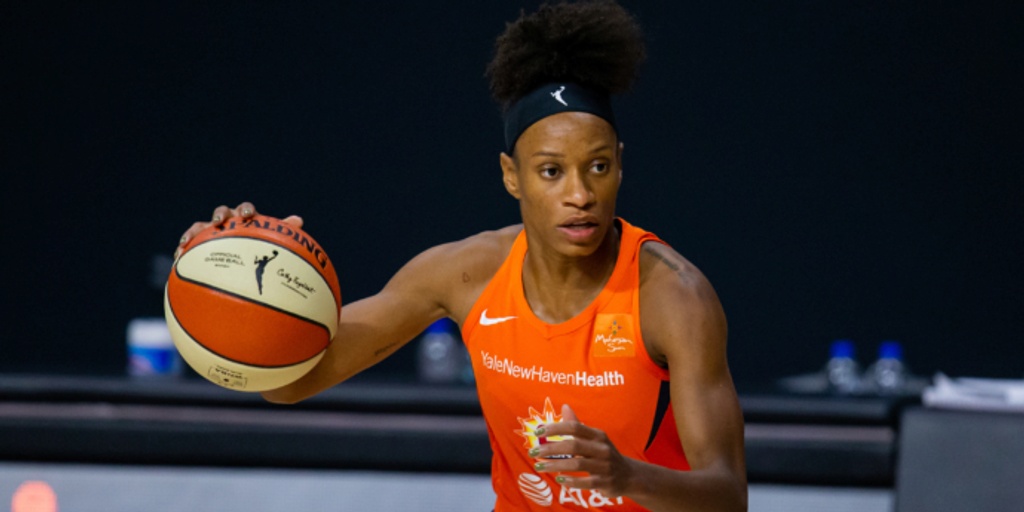 It would appear the Connecticut Sun aren't done making moves.

Not even 24 hours after reportedly agreeing to trade superstar Jonquel Jones to the New York Liberty as part of a three-team deal, the Sun have moved another franchise staple.

Jasmine Thomas, who has spent the last eight years of her 12-year career in Connecticut, is being traded to the Los Angeles Sparks, per Khristina Williams of Girls Talk Sports. In return, the Sun are getting a three-player package headlined by former UConn star Olivia Nelson-Ododa.

The Sun will receive:

Olivia Nelson-Ododa, Jasmine Walker, and the rights to Kianna Smith.

Thomas has long established herself as one of the best guard defenders in WNBA history, with five All-Defensive team selections under her belt to boot. She only appeared in five games last season, with her campaign being cut short by an ACL injury. In her last full season (2021), Thomas averaged 10.6 points, 4.1 assists and 1.3 steals while converting 40% of her threes (3.1 attempts).

Even accounting for some slippage, Thomas should be a positive two-way contributor for the Sparks next season. With multiple guards set to hit the market this offseason -- Brittney Sykes, Jordin Canada and Lexie Brown are unrestricted free agents -- Thomas' acquisition also serves as a bit of a buffer if any of them leave for greener pastures.

Though it's a late first-round pick, snagging the No. 10 overall pick is no small thing for the Sparks. They didn't have a first this year, with their selection (No. 4 overall) currently residing with the Washington Mystics (from the Atlanta Dream) due to the Chennedy Carter trade last offseason.

For the Sun, this deal serves as another example of prioritizing younger (and versatile) talent. Honoring Jonquel Jones' trade request helped open the door to use the core designation on Brionna Jones, effectively ending her free-agency tour before it began.

In this deal, I'm enamored by the potential of Nelson-Ododa. Due to injury and a contract divorce, the Sparks' frontcourt rotation was a bit of a revolving door last season. That opened up playing time for Nelson-Ododa, who showcased fun flashes on both ends of the floor.

Across her last seven games (six starts), she averaged 7.4 points, 4.4 rebounds, 0.9 assists (though that undersells her high-post passing), 1.6 blocks and 0.7 steals in a shade over 25 minutes.

The Sparks used her as a connector offensively, letting her handle the ball on the perimeter to flow into handoffs or to pick out the occasional cutter. She showcased solid feel as a screener, often doing a good job of getting her ball-handler and herself open.

What's encouraging is the scoring. Nelson-Ododa was intentional about looking for her own offense as the year went on. That's seemingly continued in overseas play, where she's averaging 11.3 points (65.3% from the field) in the WNBL right now. Despite being slight, she looks more comfortable using her body to create openings for interior shots.

The defense mostly speaks for itself. The former Big East co-Defensive Player of the Year is long and rangy, allowing her to defend quicker forwards in space. Even if traditonal centers can move her off her spot, her length allows her to alter shots anyway. I'm already excited to watch her and Alyssa Thomas wreck worlds whenenver they share the floor.

(The spacing issues between those two might not be as pronounced as it sounds on paper. Thomas is a wicked post threat and aggressive sealer; Nelson-Ododa's passing can be utilized higher on the floor, generating enough room for both to exist in the half-court.)

Jasmine Walker hasn't quite found her footing in The W, but her ability to stretch the floor -- she drilled roughly 37% of her threes during her four-year college career -- and put the ball on the deck is worth monitoring. Kianna Smith appeared in 11 games for the Sparks last season, with heavier bench minutes coming during Carter's absence from the rotation.