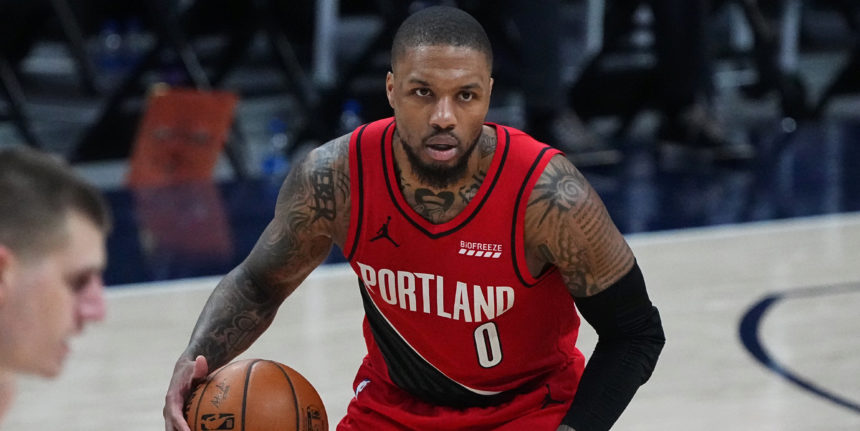 Lillard forced two overtime periods, finishing with 55 points, 12 threes, 10 assists, 6 rebounds, 3 blocks and 1 turnover while shooting 70.8% from the field, 70.6% from three-point range and 90% from the free-throw line.

Lillard's 12 threes set an all-time playoff record for made triples, and he also becomes the first player in NBA history to score 55 points in fewer than 25 field-goal attempts, as noted by our Tommy Beer.

In the two overtime periods, Lillard scored 17 points on eight field goal attempts, while the rest of the Blazers combined for two points on 12 attempts. Nikola Jokic finished with 38 points, 11 rebounds, 9 assists and 4 blocks. Here is the game recap from The Associated Press:

DENVER (AP) — Michael Porter Jr.’s 3-pointer with 1:33 left in the second overtime helped the Denver Nuggets squelch an epic comeback by the Portland Trail Blazers with a 147-140 win Tuesday night in Game 5 of the playoff series.

The Nuggets won despite Damian Lillard’s franchise playoff record 55 points and NBA playoff record 12 3-pointers, including long distance shots that forced overtime and the second OT. He eclipsed the mark of 11 set by Golden State’s Klay Thompson at Oklahoma City on May 28, 2016.

And his teammates didn’t score again, either.

Nikola Jokic, who scored 38 points and came one assist shy of a triple-double, tied it at 140 with a layup and Porter broke the tie with a 3 from the left corner with 1:33 left.

The Blazers still were within three points until a pair of costly mistakes sent them back to Portland for Game 6 on Thursday night trailing the Nuggets 3-2 in the best-of-seven series.

Lillard broke his own franchise scoring record, a 50-point outburst against Oklahoma City on April 23, 2019.

Lillard’s 3-pointer with three seconds left in regulation tied it at 121. His 3 with 6.4 seconds left in the first overtime tied it at 135 and that capped Portland’s comeback from a quick nine-point deficit in the extra period after Denver hit a trio of 3s.

The Nuggets made three quick 3-pointers in the first overtime, two by Morris and another by Austin Rivers, to surge ahead 132-123. Portland missed its first five long balls in the extra period before Lillard sank three in the final minute to force a second overtime.

The game looked like a blowout for Denver when the Nuggets went up 54-32 on Paul Millsap’s layup with 7:52 left in the second quarter.

McCollum’s buzzer-beating 11-foot jumper made it a one-possession game at the break. During Portland’s big run, the Nuggets went without a basket for more than four minutes as the biggest crowd of the season — 10,500 — went from exuberant to edgy.

Portland took its first lead at 83-82 on Lillard’s free throw after Jokic was whistled for a technical for arguing for a call.

Michael Porter Jr.’s shots went down from 21 to 13 to 11 to three in Games 1-4, prompting the Nuggets forward to declare: “I can’t let myself be as small of a factor as I was the last couple of games.” In Game 5, he put up 13 shots and scored 26 points. He also pulled down a dozen boards.

Middleton might have remained out even if Bucks had advanced
13h

ORDER ON THE COURT

Nuggets coach Michael Malone had a strong reaction to the spate of bad fan behavior across the NBA, saying it “tarnishes the game.”

“People are acting the fool. That’s my reaction. And it’s almost like it’s a copycat thing now: who can one-up the other person?” Malone said. ”... I think some people are coming out of this COVID pandemic and maybe they just are trying to express themselves. But that’s not the way to do it. Let the players play the game, enjoy the game and keep your (rear) in the seat, keep your water bottles in your lap and please don’t spit or use any racist language to any player.

“Not just our players but any player. That tarnishes the game. And the playoffs are the best time of the year for NBA basketball. Let’s get back to spotlighting the players that we have across the league.”

Trail Blazers: Portland missed its first eight shots — the first four were from long range — and the Blazers’ first basket came on a goaltending call on Porter, giving Norman Powell the basket at the 6:55 mark. ... Lillard bounced back from his 10-point performance on 1-of-10 shooting in Game 4 to hit 17 of 24 shots, including 12 of 17 from long range and 9 of 10 from the stripe.

Nuggets: Denver’s first basket of the second half came at the 9:51 mark on Aaron Gordon’s dunk. ... The Nuggets were 5-for-7 from 3-point range in the first quarter when they took 38-25 lead. ... In a three-second sequence in the second quarter, Jokic blocked consecutive shots by Norman Powell and Nurkic. ... The Nuggets went 5 for 7 on 3s in the extra periods to Portland’s 4 of 12.