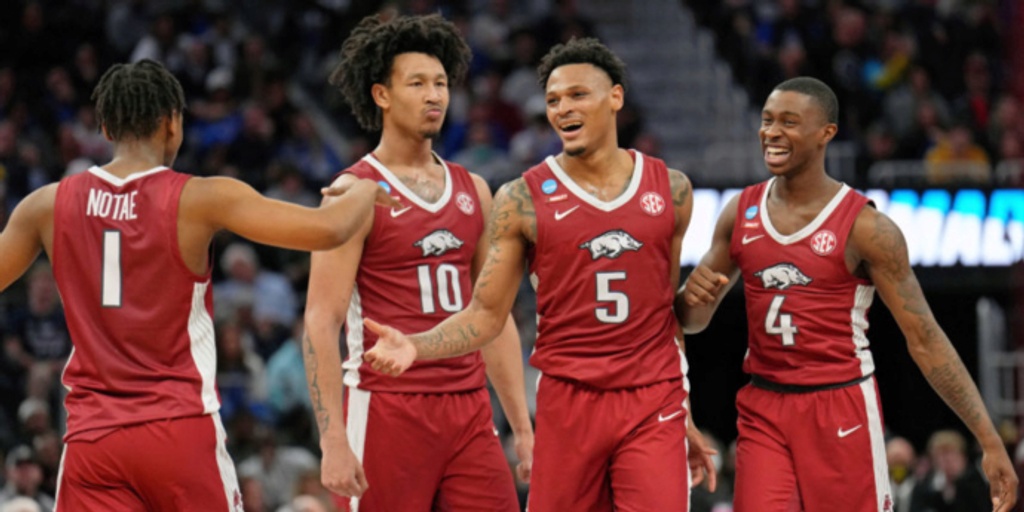 I grew up in Tulsa, Oklahoma and went to Arkansas Razorback Basketball Camp many times.

A deep bench with multiple weapons utilizing both the inside and outside games.

Running up the score, and actually running opposing teams out of the gym, as we were collectively in better shape than most of our opponents.

So it was great to see No. 4 Arkansas take down the overall favorites and top-seeded Gonzaga Bulldogs in the Sweet 16 game Thursday night 74-68 to advance to the Elite Eight.

“Thank you to everybody who said we had no chance,” Razorbacks head coach Eric Musselman told CBS after the game.

I caught up with former Razorback legends Lee Mayberry and Scotty Thurman to discuss the big upset and how Arkansas will fare moving forward in the rest of the NCAA Tournament. 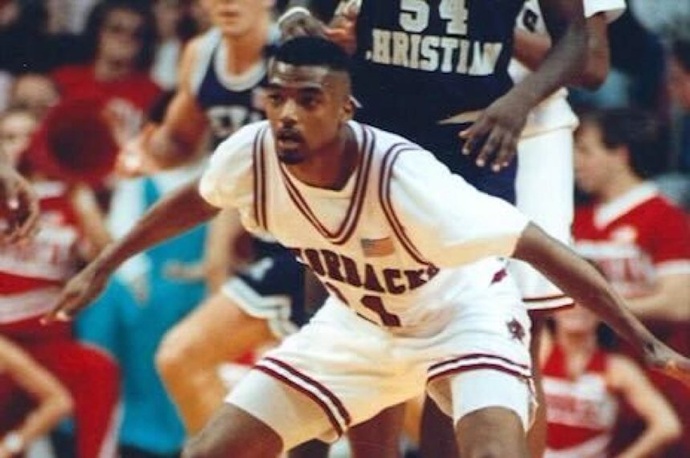 Etan: Mr. Lee Mayberry, how did it feel to see your team take down the No. 1-seeded and highly favored Gonzaga Bulldogs on Thursday night?

Mayberry: "It felt great. We were in those kids' shoes years ago ourselves, where you feel like it’s Arkansas against the world. Gonzaga was the No. 1 seed like you said; they were projected to win it all in most brackets, and most people counted Arkansas out. If you are from Arkansas or Tulsa or surrounding areas, you understand how those kids feel that they are always doubted and counted out, so they have to believe in themselves. And we have a great fanbase who are right in that same boat and have that same feeling and mentality along with us."

Etan: I saw some similarities in the style of this team with your teams in your years at Arkansas in terms of lighting it up from the three, pushing the ball, the erratic offense. Would you agree?

Mayberry: "I definitely see similarities. Our style was chaotic with Coach [Nolan] Richardson. It was difficult to run an offense against our defense, we just wouldn’t allow it. With these guys now, you see the length, the toughness, the relentless effort. Musselman really has those guys playing hard and at a high level. I love watching them."

Etan: I see a lot of the chatter today is about the refs. I saw Skip Bayless talking about a call in particular on Chet [Holmgren] that he thought was a foul. And I’m looking at the game and I’m thinking... all the calls Gonzaga got against Memphis and y’all are complaining about the refs?

Mayberry: "Yeah that’s a good point, they did get a lot of calls. It was a great game, but they definitely had a lot of calls go their way."

Etan: The call in particular Skip is talking about with Chet, J.D. Notae from Arkansas made a great play. He took to right to him like he was supposed to. If Chet stepped up and took a charge maybe, but he didn’t. He clearly fouled him. That’s what I saw.

Mayberry: "Of course I’m biased, but I felt like Gonzaga definitely got their share of calls. You listen to Grant Hill and the commentators, and it was more than apparent that everyone was against us. If it’s a 50/50 call, (it) seemed like they wanted those to go to Gonzaga too. Look, the referees aren’t going to be perfect, but I thought the game was officiated just fine. In fact, I feel Gonzaga got a lot of calls themselves."

Etan: It’s crazy, I’m looking at Skip Bayless’ tweet now, and he said in all caps for some reason:

I'M SORRY, NCAA BASKETBALL WITH ITS ONLY FIVE FOULS AND AMATEURISH REFS IS A JOKE. SO IF CHET HOLMGREN JUMPS BACKWARD AND THE ARKANSAS PLAYER DRIVES THE BALL UP INTO HIS CHEST, THAT'S A FOUL ON HOLMGREN??? CLOWN COLLEGE CALL - AS WERE 3 OTHERS ON FOULED-OUT HOLMGREN.

And I just didn’t see any of that.

Mayberry: "I thought Drew Timme fouled about 10 times throughout the game. Last night, the better team won period. We were better."

Etan: I agree, so I gotta ask you before I let you go about Nolan Richardson. I always had a lot of respect for him, how is he doing these days? Do you still keep in touch with him?

Mayberry: "Coach is doing well. I keep in touch with him. He’s taking care of his wife, Rose. He’s still living in Northwest Arkansas. He still has his farm. He’s just enjoying life. He isn’t getting around as much as he used to, but he still loves the game, watches the game and roots on the Arkansas Razorbacks."

Etan: That’s great to hear. So what do they have to do to keep this going against Duke In the Elite Eight?

Mayberry: "Stay with the game plan, being that tough team with a chip on your shoulder. I love and respect Coach K for what he has done for NCAA basketball as a whole, but I would love to see that be his last game. So we just gotta do what got us here, that grind and grit and that chip. Keep all of that going against Duke." 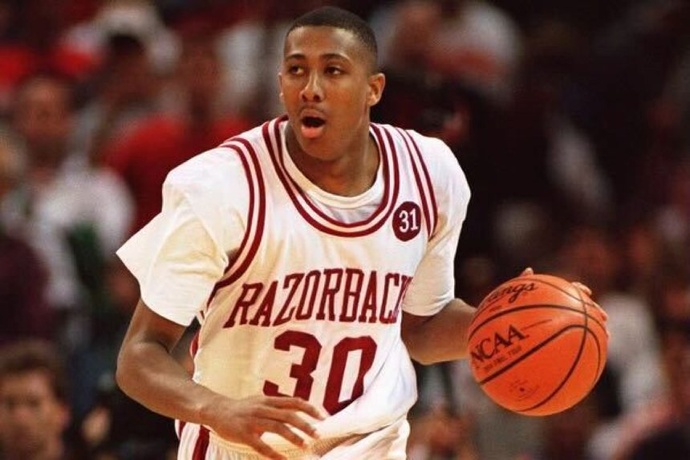 Etan: Mr. Scotty Thurman, what were your thoughts watching your team beat the Gonzaga Bulldogs on Thursday night?

Thurman: "I thought we responded very well. I was worried about us being able to get back on transition, but thought we did a great job of getting back early and not letting Gonzaga really get into an offensive rhythm. And I thought the physicality of us was something that really gave Gonzaga problems."

Etan: It’s interesting because all throughout the game, Grant Hill... and I love Grant Hill, he’s just a great human being all around, but he was really acting like Gonzaga wasn’t getting any calls. And I saw a lot of chatter on social media about the refs, did you see all that?

Thurman: "Well, it was definitely obvious that Grant was favoring Gonzaga with his commentary. I know in that position you’re supposed to be unbiased, and he definitely didn’t sound that way last night. And I saw the same commentary on Twitter you saw, but it’s all to be expected. I’m glad the team didn’t get caught up in any of that, but they stuck to their game plan and came out on top as they should’ve."

Etan: I don’t wanna bring up old stuff, but I grew up a big fan of y’all. Clint McDaniel, your teammate, went to my high school, Booker T. So in 1994, I remember being in high school in the cafeteria and all of us were rooting for y’all. And watching you hit that big shot against Duke in the Finals and winning the championship, that’s the first thing I thought of when I heard Grant’s commentary.

Thurman: "It wasn’t just you. I was thinking it too. Then, I saw someone tweet it. So I responded on Twitter and said, 'I thought it was just me.' After that, it just started to rain down on Twitter with comments saying he was still salty, and people kept posting the shot, my Razorback faithful, so it brought back great memories for me. But it’s all in good fun like you said. Nothing but respect for Grant Hill. But yeah, I did think that too."

Etan: So let’s talk a little bit about the shot since it was brought back up. Walk me through it. It really was like one of those "One Shining Moment" NCAA commercials that will always be a part of the advertising, you know? It’s etched in March Madness history forever.

Thurman: (Laughing) "Well thanks, I appreciate that. Well since you asked, we can talk about it. I don’t wanna be like I’m Al Bundy over here. (Laughing) So it wasn’t a drawn play, it was a broken play.

"Corey Beck had the basketball at the top of the key. He was looking for Corliss [Williamson], as he should have because I had just missed a couple of shots. Corey dribbled around, and passed the ball up top to Dwight [Stewart], who would’ve drained the shot himself had he not fumbled the pass. And it’s amazing that he had the wherewithal to not take a bad shot, but to still be willing to make an unselfish play which is something Coach Richardson was always adamant about — us playing unselfishly. Most kids would’ve panicked and taken a bad shot. But he didn’t. I popped out once I saw that Antonio Lang lost sight of me, like Coach Richardson drilled in my head over and over again to do if that ever happened, and [Dwight] hit me with the perfect pass. And the rest was history."

Etan: That’s great, so last question: What are the keys to Arkansas winning this next game against Duke in the Elite Eight?

Thurman: "I think the main key is to remain physical. which is something that really bothered Gonzaga. They have to obviously make shots. I don’t worry about Duke beating us in transition because I don’t think they push the ball as fast as Gonzaga did. Their help-the-helper defense has really been great, so they need to continue that. And really bring the same energy and toughness that they had against Gonzaga, and we should be okay."