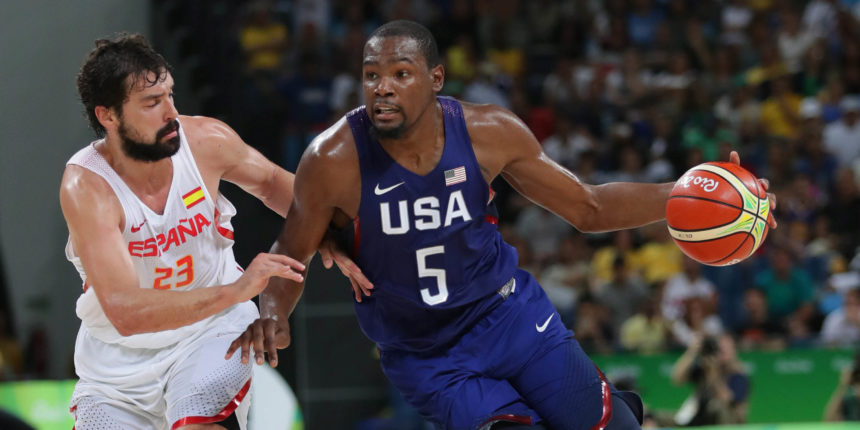 LAS VEGAS (AP) — USA Basketball didn’t blow up Kevin Durant’s phone with repeated calls to beg and plead for him to play in the Tokyo Olympics. It was a much more dignified process: They asked, then they waited.

It was the right move.

“They helped me make the decision by letting me be me,” Durant said.

And not that this matters to Durant, because it doesn’t, but he could simply rewrite the USA Basketball Olympic record book in the next few weeks as well.

“I committed to USA Basketball when I was coming out of college, and every chance that I get that I’m healthy and my mind’s in the right place to play basketball, I go out there and play,” Durant said. “I finished the year off healthy, regular season and playoffs. So, I felt like it’d be cool to get I guess a kickstart on next season by getting in shape a lot earlier in the summer with Team USA.”

“You know his famous quote? ‘I am Kevin Durant.’ There’s nothing changing,” U.S. guard Bradley Beal of the Washington Wizards said. “We know who he is. We know what he’s capable of doing and he’s doing the same thing in practice... and his leadership is just terrific. He’s, like, 39-0 in USA Basketball. That’s crazy and we want to keep that going.”

Beal had it right: Durant is 39-0 in major international events with USA Basketball. He has two NBA championships, two NBA Finals MVP awards. He came back after a yearlong layoff from an Achilles injury this season in Brooklyn and was, again, his typical unguardable self.

NBA, NBPA finalizing an agreement on health/safety protocols for the season
1h

There’s long been nothing left for him to prove, and he signed up for another Olympics anyway. Camp started Tuesday and Durant immediately began setting the tone for a roster that is mostly composed of first-time Olympians other than Durant, Draymond Green and Kevin Love.

“There’s this very cliche line that everyone uses in basketball when you’re working out: Go game speed every rep,” said Green, Durant’s former Golden State teammate. “Quite frankly, I’ve never seen anyone do it, except him. That’s how he plays the game. That’s how he works. You’re talking about a guy who would sit at home, sit in his house and watch an elementary-school basketball game just to watch basketball. Really, really loves the game, loves watching the game, loves hooping.”

All that is true, and part of the lure for Durant to play this summer.

U.S. coach Gregg Popovich was another major factor. It’s no secret that players around the league hold the longtime San Antonio coach in the highest regard, and Durant said the opportunity to play for the five-time NBA champion factored into his thinking.

“If he had said no, I would have begged, cried, done anything I could to change his mind,” Popovich said. “That’s pretty obvious. But what it says about him, No. 1, is he loves the game. He really loves to play basketball. He loves to win. He loves the camaraderie. He wants to be part of this, all the time, as we all know. And that’s his motivation. At the core, that’s what he loves to do and luckily for all of us, that’s who he is.”

Mike Brown was part of Golden State’s coaching staff when Durant was with the Warriors. Brown is also the coach of the Nigerian Olympic team, meaning he will be coaching against Durant — and his current boss, U.S. assistant coach and Golden State head coach Steve Kerr — when the Americans play the top African team in their first exhibition of this summer’s stay in Las Vegas on Saturday night.

Like everyone else in the NBA, Brown only raves about Durant.

“A lot of people see his scoring prowess,” Brown said. “Obviously, he can shoot the three, he can post up, his medium game is the best in the business. But when he came to the Warriors, I was shocked by two things. The biggest thing was just his feel and intelligence on the defensive end of the floor... and then on top of that, he’s a phenomenal passer.”

Put simply, he can do it all. That’s been obvious forever. And a third gold medal would only enhance that already-lofty legacy of his.

The U.S. will call up some players from the USA Select Team, which was ending its practice schedule in Las Vegas on Friday, to fill out its roster for exhibitions — starting with the game Saturday against Nigeria, Popovich said.

The U.S. is missing Olympians Devin Booker, Khris Middleton and Jrue Holiday because of the NBA Finals. San Antonio's Keldon Johnson, Cleveland's Darius Garland and Detroit’s Saddiq Bey are reportedly the three players who were called up to replace them.

Golden State’s Stephen Curry is playing in Nevada this weekend — golf, not basketball. He’s participating in the American Century Championship in Lake Tahoe, explaining there why he decided not to play for the Olympic team.

“I do value the offseason, and I’m working back on the court, but to try to go and play and there’s just a lot that could happen,” Curry said. “I respect every single guy that goes and plays that’s out there in Vegas and I wish them all the success and a gold medal to show for it and whatnot. It just wasn’t right for me. And I’m very confident in that decision. No regrets at all.”

5 battles to watch during Celtics training camp and preseason
5h

Damian Lillard has faith Blazers will be better this season
2h