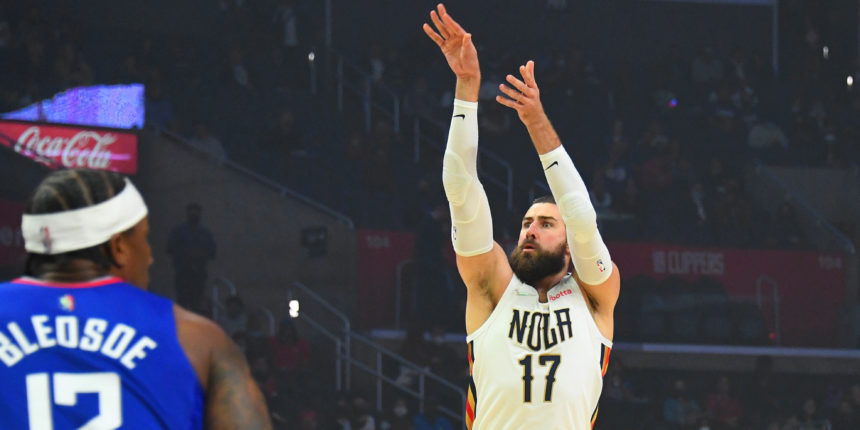 LOS ANGELES (AP) — Jonas Valančiūnas scored 29 of his career-high 39 points in a spectacular first half, and the New Orleans Pelicans beat the Los Angeles Clippers for the second time this month, 123-104 on Monday night.

New Orleans rolled to a 21-point lead in the first half with a phenomenal effort from Valančiūnas, the 10-year Lithuanian veteran in his first season with the Pelicans. The 6-foot-11 Valančiūnas hit seven 3-pointers without a miss in the first half to the increasing delight of his teammates and even himself.

“The guys were calling him Dirk Valančiūnas,” New Orleans coach Willie Green said with a grin.

Jonas Valanciunas is up to a career-high 7 threes...at halftime. 🤯

Valančiūnas isn’t quite ready to call himself the next Dirk Nowitzki, even if he resembled the Dallas great at times.

“Everybody wants to be him,” Valančiūnas said. “He’s one of the greatest big guys in the game, but I’ve still got to work a lot to be like him.”

Valančiūnas, who surpassed his career high for 3s in the first half alone, had dropped 26 points and 13 rebounds on Los Angeles 10 days earlier in the Pelicans’ 94-81 win in New Orleans. He added 15 rebounds to his prolific scoring in the rematch.

“He changed the game for us tonight,” said Brandon Ingram, who scored 27 points for New Orleans. “He came out with a lot of energy and looked like he played loose. He was the head of the snake of everything we did.”

Green and the Pelicans’ coaching staff are constantly encouraging more long-range shooting from Valančiūnas, who didn’t make a single 3-pointer in the first five years of his NBA career in Toronto. Valančiūnas added the shot to his arsenal through years of hard work, yet he is still reluctant to unleash his jumper even though he knows it improves the Pelicans’ spacing and ball movement.

A night like this is a boon for his confidence.

“I’m comfortable when I see them going in,” Valančiūnas said. “I’m not comfortable when they’re not going in. It was just a team effort. Working with the guys, getting me open, running the plays for that is five guys’ effort on the court.”

Paul George scored 27 points and Reggie Jackson had 19 for the Clippers, who have lost three of four and six of nine after a seven-game winning streak.

“We just couldn’t stop them tonight,” Clippers coach Tyronn Lue said. “We were due for a bad defensive game ... but they got anything they wanted, and we couldn’t get in any rhythm offensively.”

George closed the margin to eight midway through the fourth, but Ingram scored eight points in the quarter and led a 17-8 run to put it away for New Orleans. George lamented the Pelicans’ 47-35 rebounding advantage.

“Every team, they’re going to crash (the boards) against us,” George said. “That’s honestly our kryptonite. Every team goes toward that, sending guys to the glass. They just think they can do that and there’s no penalty to it because we haven’t been a great transition team once we get rebounds. We’re just going to see that every night.”

Herbert Jones added 16 points for the Pelicans, who rebounded from their second-worst loss of the season at Utah last Saturday to finish their three-game road trip with two victories.

The Pelicans have won three of four, doubling their season win total in the past six days after a 3-16 start without injured Zion Williamson. Their star forward has been cleared for a full return to basketball activities, further boosting New Orleans’ hopes of turning around its season.

The Clippers (11-10) still won’t have Kawhi Leonard anytime soon, and they’re struggling to keep pace in the competitive Western Conference.

Clippers: Marcus Morris got a rest after playing Sunday. Amir Coffey had nine points while starting in the veteran’s place. ... Nicolas Batum missed his fifth straight game. He is in the NBA’s health and safety protocol.

Ingram spent his first three seasons with the Lakers before he went to New Orleans in the blockbuster trade for Anthony Davis, and he still knows plenty of Staples Center employees.

“It’s always fun being back here,” Ingram said. “I definitely felt it tonight with the Clippers fans. I heard my name a lot tonight, and it felt good.”