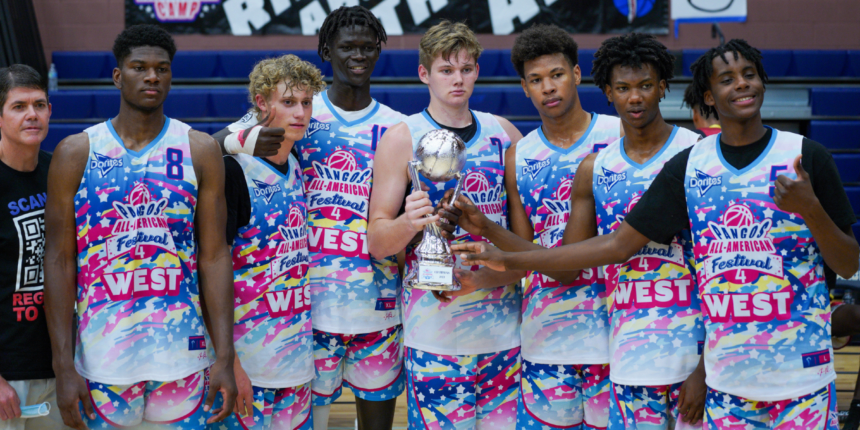 Jaxon Kohler steals the show at the Pangos All-American Festival

When I was asked a few months ago about Dinos Trigonis and his Pangos events, I said that it is an absolute necessity for my scouting process, as it gives me the opportunity to get an up-close look at the top high school players in the country. Trigonis does a terrific job putting together showcase events and runs a ton of them now, with the Pangos All-American Camp being the best of them all. I’ll be in attendance this year in Las Vegas, and I have the event penciled into my schedule every year.

It was a quick in-and-out trip for me, but it proved to be fruitful, nonetheless. I was able to get an updated look at some top-rated high school prospects that I already knew like Mookie Cook, Ernest Udeh, Jordan Walsh and Kijani Wright among others. I was also able to see some impressive players that I did not know very well, such as Fabio Basili, Sebastian Mack and Mark Mitchell, just to name a few.

But even though there was an abundance of talent, one player stole the show. Jaxon Kohler of the West team scored 53 points and grabbed 19 rebounds while leading his team to a championship win, and earned MVP honors as a result.

Prior to Sunday, I had seen Kohler play a number of times in the spring with Team Strive for Greatness, which featured Amari Bailey, arguably the top player in the class of 2022. As an NBA Draft Analyst, I naturally prioritized watching Bailey’s team when putting together my scouting schedule. As a result, I was able to become familiar with Kohler, who has not been considered a sure-fire NBA player, like Bailey. My initial thoughts about Kohler were that as a 6-foot-9, 250-pound big man, he was a capable low-post scorer, but was slow and lacked overall athleticism. All in all, I thought he was a nice player — but from an NBA standpoint, he didn’t show me anything to write home about. Not until Sunday, that is...

At the Pangos All-American Festival, I began to understand just how polished Kohler is on the offensive end. He showed an uncanny ability to score on the block, utilizing incredible footwork (an unstoppable drop-step spin move, specifically), great hands and a soft touch over either shoulder. When facing up, he regularly used a mechanical pump fake that worked like a charm nearly every time he used it. He also showed promise to be able to knock down an open shot from the outside. In addition to his scoring abilities, he also utilized his size, motor and physicality to rebound at a high rate.

Needless to say, I was impressed.

There’s a lot to like about Jaxson Kohler as a prospect, but I do still have questions about him as a long-term pro.

The NBA has become increasingly faster and more spread out each year; traditional big men that lack speed and quickness are scrutinized heavily. If and when his time comes, there will undoubtedly be questions circulating among NBA talent evaluators about how well Kohler will translate to the modern-day NBA. The correlation between Kohler’s physical development and his long-term success is significant, as strength and conditioning are the keys to him accomplishing his goals, in my opinion. I’d suggest that Kohler use Kevin Love and his history with developing and maintaining his body as sources of motivation.

After making stops at Coronado High School in Henderson, Nevada and Wasatch Academy in Mt. Pleasant, Utah, Kohler is set to play at Southern California Academy, in Los Angeles, for his upcoming senior season.

After seeing Kohler’s breakout game at the Pangos All-American Festival, one thing is certain, I’ll be watching him closely moving forward.