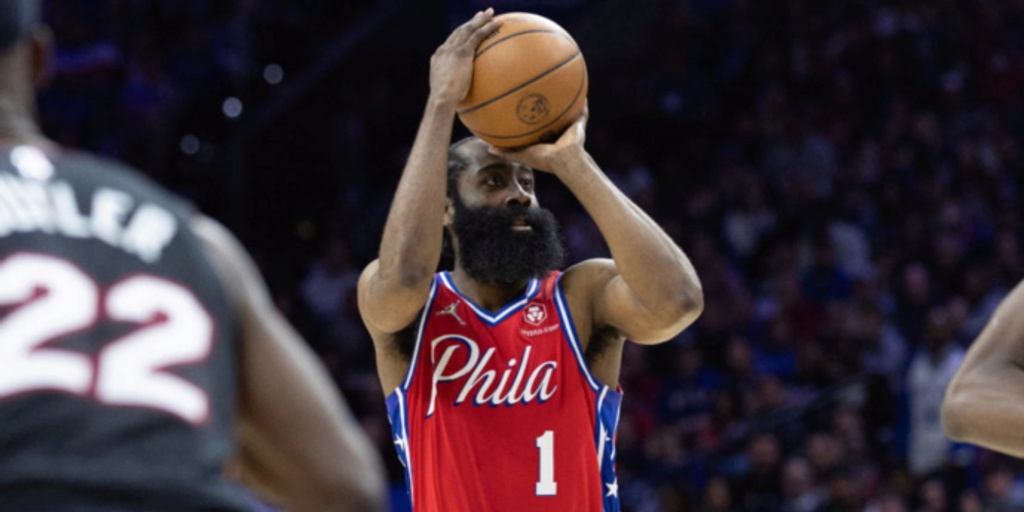 Taking a step-back: How James Harden found his groove in Game 4

With just one minute and 15 seconds remaining in Game 4, James Harden stared at holes in the Miami Heat's defense, preparing to make his move.

Danny Green crept up to Victor Oladipo's right side to create a driving lane for Harden's preferred left, and so Tyler Herro hedged the pick-and-roll to stop Harden in his tracks. Then, with just five seconds to improvise, Harden whipped out a slew of crossovers, stepped back to his right while gathering across his body, nearly dropped the ball and proceeded to nail the game-sealing three.

Harden's 16 fourth-quarter points were the most he's scored in the final frame of an NBA playoff game since way back in 2015. Moreover, Sunday was just the second time since the turn of the new year that Harden broke 30 points in a game, regular season or the playoffs. It was only fitting that the shot that had failed him most in his down year signed, sealed and delivered his keystone performance of the season.

It's true. Harden's step-back three, a weapon that once sent shivers of fear up and down defenders' spines, fell off a statistical cliff during the 2021-22 season. The Beard connected on just 33.3% of his 199 step-back treys this season; yet, in his previous four seasons, that percentage sat at 38.9% on 1,431 shots. Quite the tailspin, indeed.

It's tough to decipher what has fueled that decline. One could make the case that his lift has failed him; now, he's unable to generate the same level of space when moving front-to-back on his signature shot. Maybe it's his free-falling first step, as James is no longer able to keep defenders on their toes in lieu of the threat of his drive, making those step-backs all the easier to contain. More than likely it's a combination of both, a consequence of multiple hamstring strains in the previous season and an offseason set back by slow, plodding rehabilitation.

But that was the beauty of Sunday. Those arguments about the former MVP's decline, for the first time in a while, were best saved for another day. In Game 4, he was sublime — nah man, let's be real — he looked like Prime Harden in certain stretches, knocking down 4 of his 7 step-backs en route to 31 points on 69.2% True Shooting. Heck, the dude was feeling it so much he even took (and made!) a catch-and-shoot three.

But Harden's barrage of step-backs wasn't his only divine moment.

This drive in the second quarter was one of Harden's best rim attacks of the entire 2021-22 season after getting the switch against Herro. An hour(-ish) later, he did similar things against Bam Adebayo, first getting a half-step on the Defensive Player of the Year finalist, and then whipping out a nasty hesitation dribble to clear his way to the rim for the uncontested lay-up.

Of course, Harden wasn't without his flaws. On numerous occasions, the 32-year-old was stonewalled on drives to the rim, a trend that has reared its ugly head throughout the entirety of the season; his 59.8% shooting within 3 feet of the basket was his worst regular-season mark since his rookie year. It didn't really matter who was in front of him — PJ Tucker, Jimmy Butler, Victor Oladipo... shoot, even Herro — if Harden couldn't generate any space with his dribbling forrays, his drives were as good as done-zo, swallowed up or just flat-out swatted into nothingness by a defense eager to pounce. Overall, the Beard shot just 1 of 7 on his drives to the rim.

I've long worked under the hypothesis that Harden's decline in zippiness, and especially his first step, has dramatically affected his once-touted decelaration game. Why? Well, because his top speed has been dampered, Harden now has nothing to contrast with when he drags his feet to slow down. What I'm saying is: He's effectively working at one speed for the entirety of his drives, and it makes him all too predictable as a downhill-heavy player.

The first clip in the video below is a great example. Harden does a nice job getting a shoulder into Butler's body after a series of crossovers, but because his first three steps are so sluggish, Butler is able to stay an arm's reach away. Then, when Harden decelerates in the cadence that once made him so tough to tango with, his change-of-pace game actually works against him and gives Butler ample room to recover for the block.

One thing that has remained a constant this year has been Harden's passing, which, whew. He tossed out some beauties versus Miami.

Harden was just about the only Sixer who could capably feed Joel Embiid entry passes against the relentlessly fronting Miami Heat defense, powering a 15-point first quarter for the MVP front-runner. His second-quarter lay-down pass to a cutting Tobias Harris after faking it to Tyrese Maxey in the strong-side corner was just vintage stuff from one of the best passers in the Association.

Sunday marked Harden's sixth game of tossing out 9 dimes or more, which ties Ja Morant for the most  playoff games with 9+ assists this current postseason.

Game 4 was more than just another extraordinary performance etched into a storied legacy; it was the physical representation of a player breaking out of the shackles of his least efficient season since just 20 years of age.

Is it sustainable? Can Harden continue to supercharge and lead a playoff offense? And, maybe more importantly, can The Beard helm the Sixers into winning the minutes (by +3) with its superstar in Embiid off the floor?

That much is to be determined... and is maybe the biggest swing factor of the 2022 postseason. Sure, Harden had himself a monstrous showing with his team's season on the line, but 6 of his 8 makes came from the three-point line; otherwise, he went just 2 of 8 from two-point range on the night — a troubling trend for a player that's so rim-dependent.

It's crazy, but suddenly, one of the league's most prestigious scorers — a walking 50-point bucket just two seasons ago and a former MVP — is one of the NBA's biggest X-factors in the postseason.

The success of his Philadelphia 76ers rides on his ability to take a step back, step-back and reclaim his greatness on the shot that brought him to the forefront of the NBA landscape.