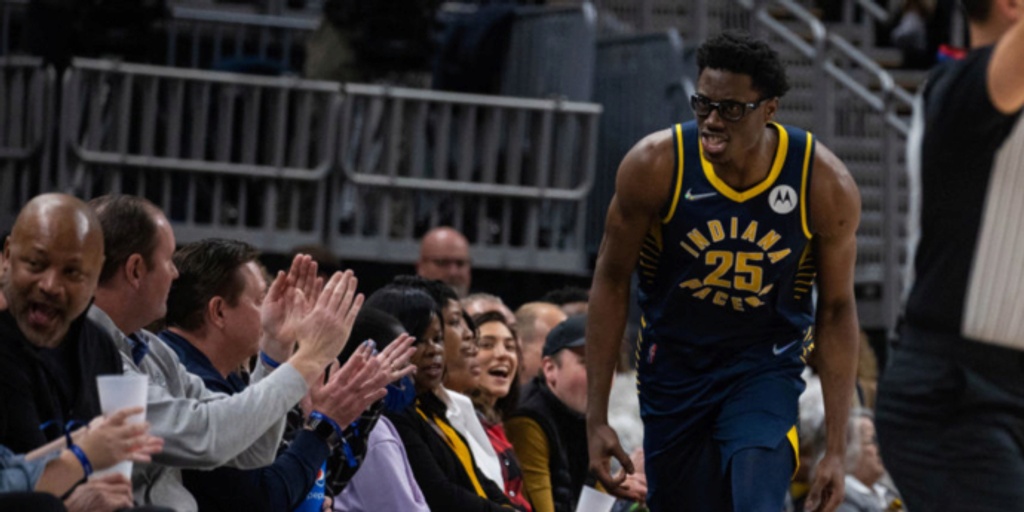 Jalen Smith is shedding the 'bust' label with the Pacers

During the first season-and-a-half of Jalen Smith’s NBA career, he rarely saw the court with the championship-hungry Phoenix Suns, who were in win-now mode after acquiring Chris Paul.

Smith, the former No. 10 overall pick in the 2020 NBA Draft, was never able to crack the rotation in Phoenix. Not only was Deandre Ayton already the entrenched long-term answer down low, Dario Saric and JaVale McGee were both above Smith on the depth chart as well.

In a shocking turn of events, the Suns declined Smith’s third-year team option; it’s a rarity for that to occur for any first-round pick, let alone a lottery pick who was just drafted a year before. When Smith had his few opportunities to make an impression on the Suns’ front office, he never really popped in emphatic fashion. In NBA Summer League, Smith didn’t dominate like a former top-10 pick. And during Smith’s rookie season, the Suns simply didn’t have the time to develop a relatively raw prospect as they chased the Western Conference’s top seed.

Entering the 2021-22 season as seemingly a sunk-cost asset for the Suns, everyone knew that Smith wasn't in the Suns' long-term plans. This became abundantly clear once they decided to decline his team option. On an expiring contract as a second-year player — which made it impossible for the Suns to keep him over his $4.7 million cap number — Smith became trade bait. In the end, it netted Phoenix a reunion with versatile forward Torrey Craig. The Suns sent Smith and their 2022 second-round pick to the Indiana Pacers for Craig, who still has another year remaining on his contract.

Smith was a low-risk, high-reward throw-in for the Pacers, a team that was clearly a seller as the trade deadline approached. Indiana had little to no expectations upon Smith’s arrival. What’s occurred since has been awesome to see from a player-development standpoint, and the 21-year-old big man is earning himself a lot of money as an upcoming unrestricted free agent.

Since joining the Pacers three weeks ago, Smith is averaging 13.1 points, 8.0 rebounds and 0.6 blocks in eight games. What makes those numbers even more impressive is that Smith is only clocking 25.1 minutes per game with Indiana.

Pacers head coach Rick Carlisle has deployed Smith as a lanky stretch-4, which was the Suns’ original idea with Smith. A versatile defender who can shoot threes at an above-average clip, Smith hypothetically would've been a strong fit within the Suns’ rotation as someone who could actually play spot minutes alongside Ayton when necessary. In Indiana, Smith is showing that he can thrive in this role that Suns GM James Jones initially envisioned him playing.

Smith is firing away from deep with the Pacers, attempting 3.9 threes per game and hitting them at an eye-opening 45.2% clip. And from an overall efficiency standpoint, Smith is carrying an elite 70.2% True Shooting percentage since leaving the Suns.

With so many players trying to find their footing in the Association, a lot of confidence comes from getting an opportunity. That was never going to happen in Phoenix, which is why Smith’s agent (Mike Kneisley) helped Phoenix along the way in finding a new home for the former Maryland Terrapin. Both sides knew that this wasn't a good fit, so moving the big man and giving him a fresh start somewhere he could play more was best for both parties.

Smith is certainly taking full advantage of what’s been provided to him on the Pacers, a team who has blown it up by trading away Domantas Sabonis, Caris LeVert, Justin Holiday and Jeremy Lamb. Focusing on a more long-term approach with internal development, and building an enticing young core of players, Smith has a long runway to make an impression on his new team.

Indiana isn’t prioritizing wins right now. All the franchise cares about at the moment is higher lottery odds and finding out which pieces fit into their puzzle past this season. Smith is forcing his way into the conversation, but the Pacers may be in a serious pickle if they want to keep him around this summer.

The most money Indiana can offer Smith on a multi-year deal as an upcoming free agent is what his salary would’ve been next season. As a former lottery pick entering free agency in his third year, the team who currently has him under contract is placed within these capped rules. Anyone else with cap space around the league can sign Smith to a deal higher than Indiana’s ceiling limit. It’s not fair for the Pacers, but they were the ones with no expectations on Smith when he first arrived anyhow.

What Smith is doing right now is making himself some serious cash, entering a historically bad crop of free agents. The 2022 class is shallow on game-changing talent, to say the least. As a blossoming prospect who seems poised for a full-fledged breakout in his next stop, Smith could be doubling his annual salary once he signs the dotted line on a new contract in July.

Simply speculating, Smith’s value might end being in the range of what Zach Collins earned from the San Antonio Spurs after an injury-filled first NBA chapter with the Portland Trail Blazers. If Collins can earn $7.3 million per year on average, so can Smith, as his stock continues to soar heading into the tail-end of his sophomore campaign.

Many were quick to throw the “bust” label on Smith after his stint in Phoenix turned into a worst-case scenario from an on-court perspective, but he’s shutting down that noise as of late. Smith is showcasing true two-way potential with an ascending value on the court... and in his bank account.