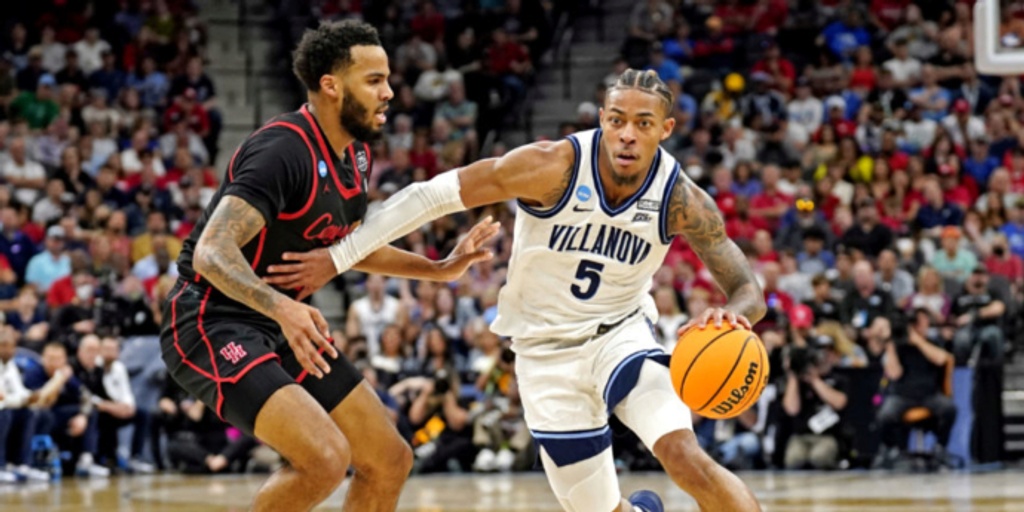 Right before officially clinching their seventh Final Four berth this past weekend, the Villanova Wildcats lost junior guard Justin Moore, who had to be helped off the floor after a freak injury while dribbling to kill the clock with less than 45 seconds to go.

'Nova beat Houston 50-44 in the Elite Eight to become one of the last four standing teams in the Big Dance for the first time since 2018. However, it was announced days later that Moore — Villanova’s second-leading scorer at 14.8 points per game on .397/.356/.750 shooting splits — ruptured his right Achilles tendon, prematurely ending his season.

Much of the basketball world united in comforting Moore during an excruciatingly awful time to receive such news, including Kevin Durant, who ruptured his own Achilles during the 2019 NBA Finals.

“What was so impressive to me was, Durant said, ‘I’d like to talk to [Justin], talk to the parents about the process. I want to tell him that.’ He listed himself, Klay Thompson, a couple other guys I can’t remember — he goes, 'Look, these guys had it in the NBA.' And people in the NBA know now that you can come back from that.”

Moore wasn’t just 'Nova’s second-best scorer throughout the 2021-22 season, but the 6-foot-4 guard earned Second Team All-Big East honors and All-Big East Tournament honors earlier this month. Moore’s been a starter in all three of his seasons at Villanova, and has seen his scoring averages jump from 11.3 to 12.9 to 14.8 points per game. This season, he netted a career-best 17.1 points per 40 minutes while also being the Wildcats’ best rebounding guard, pulling down 4.8 boards per contest.

According to FiveThirtyEight, there have been six major injuries to Final Four bound teams in the Men’s NCAA Tournament since 2010. Using the qualifier of players logging at least 20 minutes in an NCAA Tournament, these players include Kalin Lucas of Michigan State in 2010, Darryl Bryant of West Virginia that same year, Louisville’s Kevin Ware (do not Google it if you’re reading this during lunch) in 2013, Willie Cauley-Stein of Kentucky in 2014, Auburn’s Chuma Okeke in 2019, and now Moore.

Lucas ruptured his Achilles against Maryland in Round 2, and the Spartans subsequently lost in the Final Four. Oddly enough, Bryant broke his foot in the same round, and his Mountaineers were also eliminated in the Final Four. Ware had a gruesome injury against Duke in the Elite Eight, and his Cardinals are the only team of this specific group that became national champions so far. Cauley-Stein suffered a left ankle injury in Round 1, and his Wildcats lost in the title game. And Okeke tore his ACL in the Sweet 16; Auburn reached the Final Four round before having its season end.

So, how does 'Nova piece together the production and minutes to replace Moore? He’s logged 35.9 minutes per game since the beginning of the Big East Tournament, and has led the Wildcats with 34.6 minutes per contest this season.

Collin Gillespie — the 2022 Big East Player of the Year, Big East Tournament MVP and Third-Team All-American — will likely be keyed in on that much harder against Kansas this weekend. (I mean, that’s what you’d all do if you were in charge of the Jayhawks' defense, right?)

Though the Villanova-Houston offense resembled the (lack of) effectiveness of the Brock Lesnar-Goldberg match at WrestleMania 20, Daniels came up big with 12 points in 35 minutes, even as it came on 4 of 16 shooting. Every point matters against Houston, who had become a tournament favorite with sportsbooks due to its defensive run to the Elite Eight.

Jermaine Samuels, who led the game with 16 points, is 'Nova’s leading non-guard scorer at 11.1 points per contest. The 6-foot-7 big also pulls down a team-high 6.5 boards per contest while shooting 47.4% from the field and 77.3% on free throws. Eric Dixon and Brandon Slater are the other two starting forwards, and there, you have 'Nova’s main minute-eaters.

Moore, Gillespie, Slater, Samuels, Daniels and Dixon are the only Wildcats averaging at least 10 minutes per game this season, ranging from 34.6 to 25.1 in the order they’re listed.

At least one of the following two guys will have to step up going forward to really alleviate the non-Moore minutes. The first would be Bryan Antoine, a junior who has come off the bench for three seasons with the Wildcats and wasn’t one of the seven players to log minutes against Houston. Antoine hasn’t played more than 11 minutes in a game since Jan. 25 and has scored 2 points since Feb. 12 (seven games, 35 minutes), but has battled injuries of his own, which is why he didn’t appear until December.

He recently told the New York Post that “I’d say I’m pretty confident. I’ve had the same mindset from Day 1. It hasn’t really changed for me. Obviously with the injuries, I have been set back, but I’m still the same player from high school.”

Three years ago, Antoine was a five-star, top-20 recruit and McDonald’s All-American who chose Villanova over Duke, Florida, Kentucky, and Kansas. The 6-foot-5 guard should have a chance to prove he can still resemble that as the Wildcat rotation now has to expand beyond six.

The other guard in waiting is fellow 6-foot-5 junior Chris Arcidiacono, the brother of the Ryan. The younger Arcidiacono did log two minutes against Houston but hasn’t cracked 10 since March 5, which is the only other time he’s scored in a game since Feb. 22. Per the Villanovan, Arcidiacono downplayed his potentially increased role with a boring quote.

He’s downplaying it here, but no doubt that it’s possible both Antoine and Arcidiacono receive increased roles against Kansas this Saturday.

Villanova will need to squeeze everything they can out of their non-regulars in hopes of finding something unexpected to help their championship quest.

Villanova played one game this season without Justin Moore --- an 85-74 win over UConn on February 5th in South Philadelphia.

Chris Arcidiacono had nine points in 26 minutes off the bench.

The Wildcats don't have what they had, but they still have enough. https://t.co/DckgK3BJyi