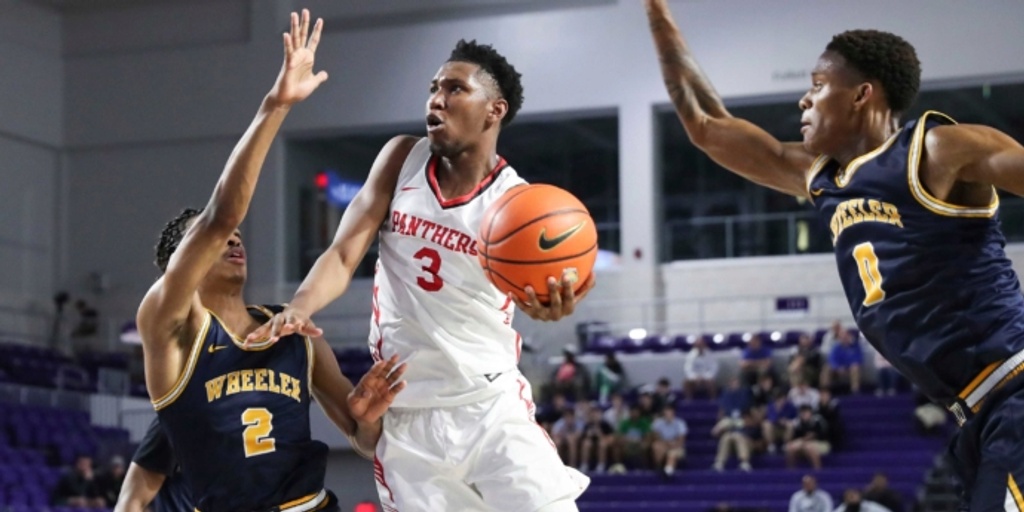 I checked into the arena at 10 a.m. and caught all eight contests. These standouts, among many others, caught my eye:

Mason So, Bishop Loughlin — So wasn't the leading scorer of the game or the team MVP, but he really impressed with the little things he did to help the Stags keep control. The UNC Greensboro commit finished with 14 points and operated as a secondary ball-handler and spaced the floor well.

So hit 2-of-5 three-point attempts, but his best play came when he initiated the offense, passed the ball away, snuck behind the Bishop Loughlin zone to the low block and got it back for an easy layup. The senior also hustled on the glass impressively for a 6-foot-2 guard and grabbed 7 total boards.

Tyonne Farrell, Mt. St. Joseph's — Farrell logged an awesome statement game in front of the college recruiters and NBA scouts: 19 points, 5 assists, 4 blocks and 4 rebounds. The forward (listed at 6-foot-6, though he seems taller) was a monster protecting the rim. Both squads talked trash back-and-forth throughout and Farrell's rejections made quite the statement.

"Scrappy game; they were talking a lot of smack," Farrell told Basketball News. "It was good to block shots and talk back."

He also nearly brought the hoop down with an emphatic designed alley-oop slam. But Farrell, a junior, was more than a rim-runner and cutter. He made 1-of-2 triples and was not afraid to power-drive from the perimeter. Farrell grew up playing guard but has grown and built out his frame. He lists Paul George and Jayson Tatum among his favorite pros to watch because of the way they can handle the ball and use their strength fluidly.

Farrell and Illinois-bound senior teammate Amani Hansberry teamed up for 5 assists apiece; each took turns dissecting North Laurel's zone from the middle of the half-court. Hansberry had a strong afternoon of his own with 14 points, 10 rebounds, 5 assists and 3 steals.

"Me and Amani, we go well together because we both can pass," Farrell said. "So he'll catch the ball, I'll backdoor slip and he'll find me. And then, we'll set screens for each other, [and] we both can handle the ball pretty well for bigger people. So it's lovely playing with Amani. He's a great player."

Farrell didn't dive into his college situation, but he has publicly posted an offer from Rhode Island and said he's confident in the direction of his recruitment. He didn't even know NBA personnel could attend this year's Classic — but it added another boost of confidence when he learned afterwards.

"That makes me feel great; I didn't know that," he said with a laugh. "That's amazing... gotta get my name out there."

Reed Sheppard, North Laurel — Sheppard, a four-star senior bound for Kentucky, simply didn't have his shot falling (5-for-21 from the field, 3-for-14 from three-point range). But he still ended up with 13 points, 13 rebounds, 9 assists, 3 blocks and 2 steals by impacting the game just about everywhere else. He played at a rapid pace that really worked in transition, but even his drive-and-kick passes occurred at blazing speeds. Sheppard follows in the footsteps on his father, Kentucky legend Jeff Sheppard, but the younger ballplayer looks more than capable of carving out his own path.

Robert Wright III, Neumann-Goretti — Alright, another smaller guard with a big day! Wright, a 6-foot junior, has already committed to Baylor and he posted 17 points, 6 assists, 5 rebounds and 4 steals for Neumann-Goretti in the victory. He displayed some impressive passing reads and decision-making in the open floor. Wright didn't shoot all that well and did struggle in the half-court with some of the opposing size. But he's crafty and creative, and his 5-foot-10 teammate Khaafiq Myers helps form one of the most fun backcourts seen this weekend.

Miles Rubin, Simeon — Rubin is a 6-foot-9, 3-star big man en route to Loyola Chicago. He finished with an efficient 17 points (8-for-10 from the field) plus 7 rebounds and 2 blocks, and was the beneficiary of some timely interior passing. His frontcourt partner and twin brother Wesley (7 assists) frequently caught the basketball around the elbow and threw it inside as Rubin cut to the basket.

The senior also added two blocks, one being an impressive help-defense rejection on 5-star guard Boogie Fland. Simeon tasked Rubin early with showing hard in pick-and-roll defense and it led to two fouls, so there's room to improve with his mobility on the perimeter. Still, Rubin was rock-solid inside and a safe bet as a decision-maker.

Also, I have to shout out Simeon guards Michael Ratliff and Rashard McKinnie. They took turns tracking Fland and neutralized his downhill speed and strength. Fland can get low and slide right by most defenders, but not these two.

Zayden High, Compass Prep —  Most of this high-caliber clash was pretty ugly, but High helped Compass Prep pull away late with some timely two-way moments. The 6-foot-10 power forward went a perfect 5-for-5 with 15 points, including a three, a one-dribble pull-up two and some interior scores. His one block was a monster rejection at the rim on Oak Hill big man Drayton Jones.

"I like to think of myself as a shot-blocker," High said postgame. "I'm really good at timing the ball before it goes to the rim. It's all about timing for me — timed it, blocked it, right point at the right time."

High took instruction from his coaches late in the game regarding screening angles on both sides of the ball. In his first year at AZ Compass Prep, the UNC-bound big man says he's learning a lot about the ins-and-outs of screening.

"Coming to AZ Compass, I've learned a lot about setting screens, shifting my hips and being able to re-screen," he said. "It's helped me out because I'm a pick-and-pop guy; I'm a pick-and-roll guy. So it's lethal to the defense."

DeShawn Harris-Smith, Paul VI — The Maryland-bound senior absolutely rocked in a huge win for the Panthers. Harris-Smith compiled 23 points, 11 rebounds, 7 assists and 4 steals. He's quite strong for a wing listed at 6-foot-4 and used that strength to surge past defenders on his drives. Harris-Smith also showed some foresight as a vertical cutter and held his own defensively. He seems physically prepared and experienced enough to make the leap to college ball as a dynamic 4-star talent.

Simeon Wilcher, Roselle — Wilcher, with 21 points and 5 assists, was Roselle Catholic's scoring spark to keep this game competitive. The senior guard has all sorts of tricks in his bag, including one crab-dribble-type move that split two defenders and ended in a layup. Wilcher had a lot on his plate with 5-star teammate Mackenzie Mgbako struggling, so the 6 turnovers are understandable with the load he had to carry as a creator. He'll be the next top-notch guard to watch at North Carolina next season.

Tyran Stokes, Prolific Prep — There was one moment late in the second half of Prolific Prep's blowout victory where Stokes caught his breath during a pause in action. A young fan exclaimed, "He's just a freshman!" from the bleachers and Stokes tossed a sly wink back.

"My game, I just come with a swag," Stokes told Basketball News. "My teammates come with it [too], so it's just a group thing."

Stokes will assuredly be among the top freshmen in the country whenever 2026 rankings drop, and he backed up his confidence with an easy 10 points, 10 rebounds and 3 assists. The 6-foot-7 wing threw down two alley-oop dunks from senior Aden Holloway and lobbed up one of his own to Zion Sensley.

Prolific Prep has several more experienced playmakers, so Stokes can get comfortable spacing the floor and cutting for the most part. He says his coaches and teammates have helped advance his overall processing speed as a cutter.

"[In] middle school it was a lot slower, but once I got to high school, it just became way faster. The game was faster, so I had to step my game up," he said.

Stokes already has swarms of colleges after him (just check his Twitter), and HoopHall was a big test for his maturity under the eyes of college and pro scouts. He says his mother, Kee, is his biggest source of support and helps relieve some of the stress of his impending rise.

"Me and my mom, we just work as a team to block all the noise out," Stokes said. "People come at me, people come at her, and we just stick together and don't let nobody get to us."

Zion Sensley, Prolific Prep — Beyond throwing down that alley-oop from Stokes, Sensley earned his game's Most Valuable Player robe with with 18 points, canning 7-of-10 shots. He knocked down threes from the corner, ran the floor for layups and even added in some mid-range self-creation. Sensley has more game off the dribble than he got the chance to show in a dominant win, and his offensive versatility at 6-foot-8 is intriguing. He's a 4-star junior worth keeping an eye on.

Justin Edwards puts the first points on the board for Imhotep. pic.twitter.com/z6dhGBzqYJ

Justin Edwards, Imhotep — Edwards made his case for the top billing in the 2023 high-school class with a dominant effort in a thrilling Sunday nightcap. The 6-foot-7 wing amassed 25 points, 12 rebounds, 6 steals and 4 assists.

The defense particularly impressed me. Edwards took on Ian Jackson (11 points, 4-of-10 from the field, 5 assists), one of the best juniors in the country, and stuck with him throughout the matchup. He sprawled out on the floor for one steal and used some quick-twitch hands to poach other passes and get running. Edwards includes a defensive emphasis whenever he tries to cultivate a well-rounded performance.

"When I have an all-around game, it's me locking in defensively and getting my teammates going, so that was just the main thing," he said postgame.

Of course, the scoring was pretty remarkable too — a combination of emphatic driving slams and lefty mid-range pull-ups. He even snuck in an impressive entry bounce pass that turned into a layup assist. If you want to call Edwards the best senior in the country, you'll get no complaints from me.

Steven Solano, Cardinal Hayes — Solano's final stat line (4 points, 6 rebounds and 4 blocks) might not pop off the page, but his impact far transcended the box score. The lanky 6-foot-11 center was an impactful rim protector even beyond his swats and consistently thwarted Imhotep with his length and timely rotations. He only got on the scoreboard twice, but one bucket was a nifty layup spinning out of the post, suggesting he has a bit more of a bag than we saw. Solano's a 3-star center with a host of high-major offers and he could be an underrated find wherever he ends up.