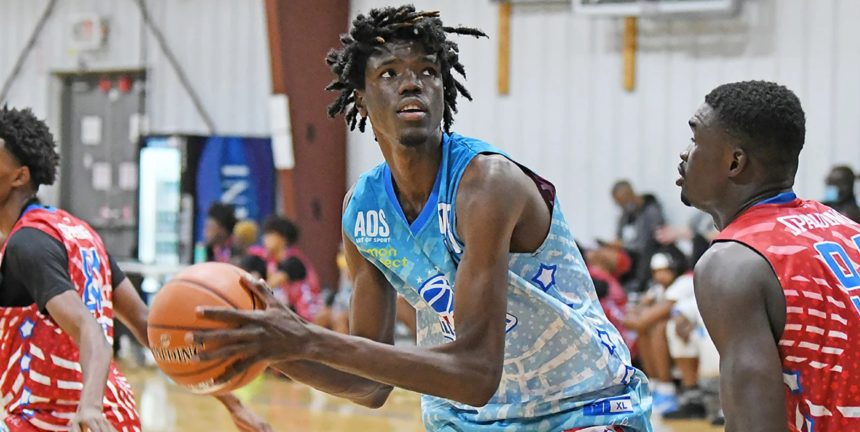 Baye Fall, a five-star recruit who is widely regarded as the best center in the class of 2023, was recently dismissed from Denver Prep Academy.

“Junior center Baye Fall has been dismissed from the Denver Prep Academy national elite basketball team for conduct of concern and violations of team rules," the school announced in a press release. "At DPA, we pride ourselves on providing students and athletes a positive, structured environment designed to promote personal development.

“We talk about it all the time: A basketball team is more than just a team. It’s a family and an organization, and each and every member is expected to uphold certain standards and expectations. When you don’t hold yourself to those standards and expectations, you no longer have a place on this team. We’re going to operate at a high level here on and off the court, regardless of wins and losses. Baye is an extremely talented player and we wish him all the best for his future playing career.”

Now, it’s possible that Fall will attend his third school in four years.

Fall is from Senegal, and he grew up playing soccer (as a goalie). He moved to the United States at 15 years old and initially wanted to be an architect, but then a dominant performance at the Pangos Junior All-American Camp served as his coming-out party as an elite prospect.

As a sophomore, Fall was named to MaxPreps' Sophomore All-American First Team and earned the Class 3A State Player of the Year award. He was also co-MVP of the 2021 Pangos All-American Camp's Top-30 game.

Our Senior NBA Draft Analyst Matt Babcock has been impressed with Fall’s game and potential.

“Although Baye Fall stands 6-foot-11 and possesses a 7-foot-5 wingspan, he is very light on his feet and runs the floor very well,” Babcock said. “He also has soft touch, considering his size. He needs to add physical strength and functional weight, as he is very thin. However, he certainly has the raw talent to become a legitimate NBA prospect.

"I'm not sure of the details regarding his dismissal from Denver Prep Academy, but I'm hoping it's just a small bump in the road as I'd like to see him make the most of his talent long-term.”

A recent article by Kyle Fredrickson of The Denver Post gives an inside look at Denver Prep Academy and how it was founded last year, with Fall as its first student. With Fall dismissed, the school has nine students who live in a 6,000-square-foot home (as detailed by Fredrickson). The school has earned its accreditation from the NCAA, so each player will graduate with an academic transcript that meets college-admissions requirements.

My past life as a sports agent: Bologna, Italy
17h

How the Washington Mystics are winning with activity
15h

Lloyd Pierce opens up about BAL Coaches Clinic, his growth as a coach
20h