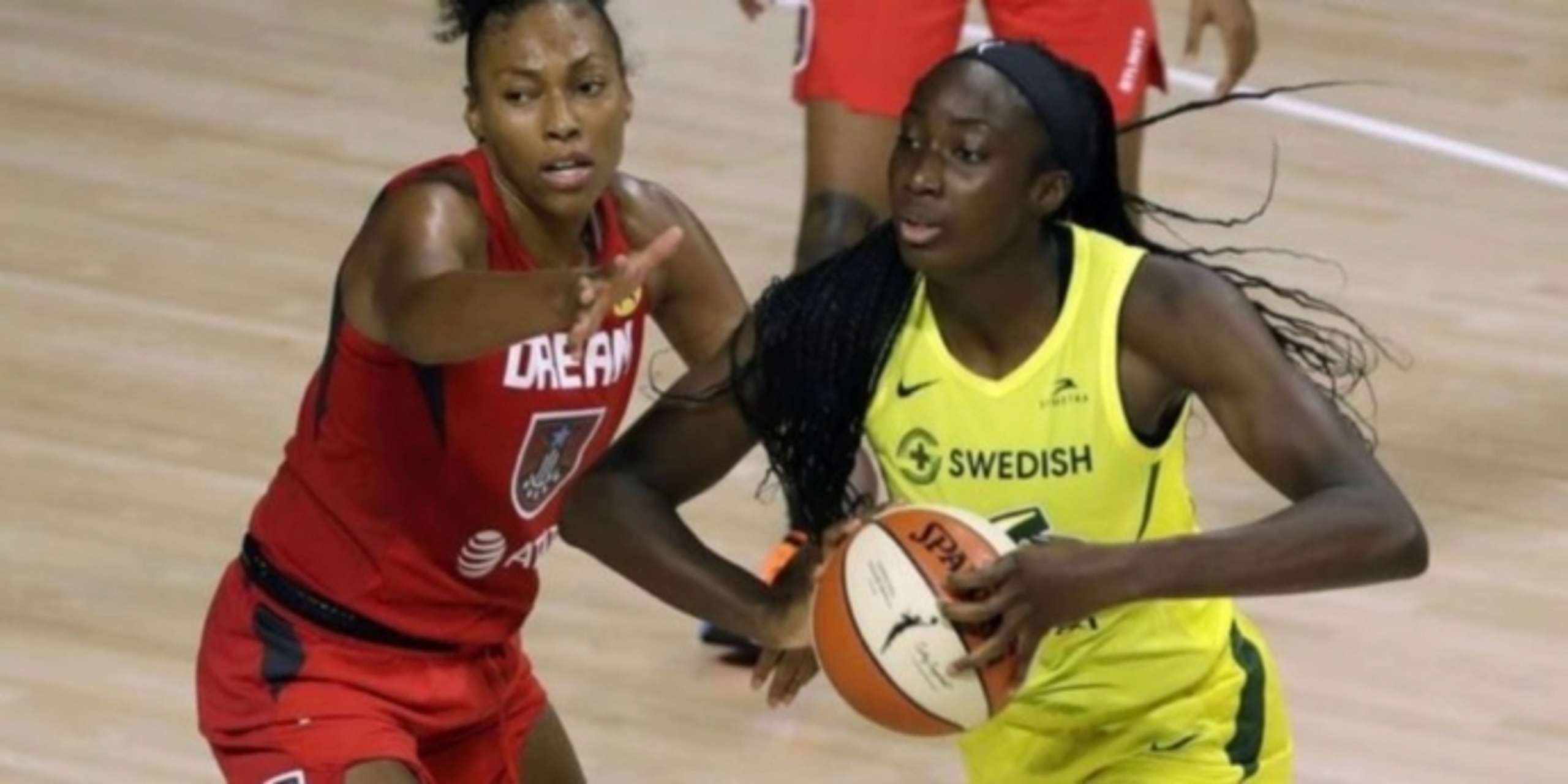 Seattle Storm's Ezi Magbegor cares not for your space

There are many avenues to crafting a successful defensive scheme, Personnel is the main decider, of course. For example, you're not running a switching scheme with bigs that can't slide their feet or with guards who have weak centers of gravity. But depending on who you have, you can do pretty much anything if you nail the details.

For years, I've loved watching the Storm defend. Their style borders on frenetic: constant ball pressure, aggressive help and plenty of strain placed on their bigs when asked to scoot above screens. When they're locked in, it feels like there's nowhere to go with the ball. Basic pick-and-roll reads aren't there, and even if you get off the ball early against their pressure, the backline is rotating on time and on target.

It should come as no surprise that the Storm have ranked 3rd, 4th, 1st and 5th (but less than a point per possession shy of 3rd) in defensive rating over the past four seasons. In that same span, they've also been near the top of the leaderboard in opponent turnover rate, the percentage of possessions on which their opponents commit a turnover.

Range is the name of the game for the Storm. In the early portion of this season, no player embodies that quite like third-year big and first-year starter Ezi Magbegor.

Magbegor is a bit slight for the center position, as she is listed at 6-foot-4 and 176 pounds, nearly identical to Chicago Sky forward Candace Parker. But she's able to counter that with her length (6-foot-7 wingspan) and her impressive mobility. That combination of traits allows her to toggle between schemes.

When directly involved in action, guards see their windows close in a flash. It's especially true when Magbegor is tasked with playing to the level of the screen or higher. She's too long to comfortably flip passes over her, and she moves well enough to cut off driving angles. Pocket passes are your best live-dribble option, but even then you're asking a lot of your guards.

It's worth noting that Magbegor is still trying to learn the nuances of drop coverage. There are possessions where she commits to a guard too early or sinks too far back to cut off a rolling big. But because of her length, she's able to chew up space when she's wrong. There aren't many bigs in the W with a larger margin for error than her.

Trying to attack Magbegor one-on-one is a challenge. Bigger centers are able to establish position against her in the post, but she counters that by making entry passes a pain in the butt. And if you're trying to trying to run your offense higher up, be careful.

Even if teams make an entry pass, trying to shoot over the top isn't easy. Magbegor is long, active and a quick leaper. She blocked post behemoth Liz Cambage three times on Friday night. Honestly, the back-and-forth between them was a fun watch.

We've also gotten fun flashes from her defending in space by her lonesome. She's able to toggle between both frontcourt slots, and she hasn't looked out of place when matched up with guards. Ask Courtney Vandersloot and Skylar Diggins-Smith.

The scary part is Magbegor is also a menace when operating off the ball. Trying to run 1-4 pick-and-rolls against the Storm is another issue altogether,particularly when Breanna Stewart is the 4 being "attacked." The double whammy, however, is activating Magbegor as a helper. She can fly around, man.

That's Jantel Lavendar involved instead of Stewart, but you see the intrigue. Diana Taurasi drawing two to the ball should create an advantage situation, yet Magbegor is able to play between two, taking away the roll from Tina Charles before sliding up to swat Bri Turner at the rim.

Trying to make passes in her area is also a futile endeavor. Lazy passes will be plucked from the air. Desperation feeds are as good as hers.

Now for the numbers: Magbegor ranks second in the W in blocks (2.8) and is 14th in steals (1.5). Her 4.3 stocks (steals plus blocks) lead the W, with Sparks guard Brittney Sykes (3.0 steals, 1.0 blocks) being the only other player averaging at least four.

I think you get my point.

Magbegor moves like a 3, has the size of a 4 and is able to cause havoc in the paint at the 5. Her size and mobility unlocks a ton of scheme versatility for the Storm, which in turn makes them an elite unit when she's on the floor.

She's racking up ridiculous counting stats without fouling. Tallying 26 stocks to 14 fouls is wild considering what she's asked to do and who she's been asked to do it against. She's seen Cambage, A'ja Wilson, Charles, and Sylvia Fowles in a two-week stretch.

She still needs some refinement, but we're in the midst of something special with Magbegor.