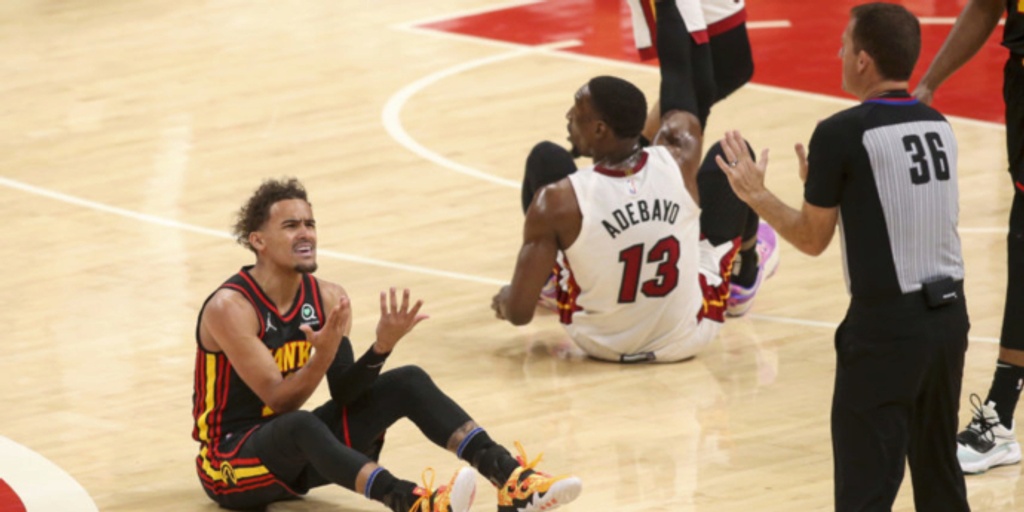 Explain one play: How the Heat are stifling Trae Young

It's hard to boil down four games to a single possession, but if you wanted to tell the story of the Miami Heat and Atlanta Hawks' series — one in which the Heat are a win away from a gentleman's sweep — look no further than a late-second ]-quarter stretch from Game 4.

It starts with PJ Tucker picking up Trae Young from the inbound. Clint Capela steps up to set a screen from the logo — generally a good thing during the Young Era, but in this case, it simply brings Bam Adebayo into the frame.

Young doesn't want that — Adebayo has switched onto him 16 times in this series; Young has passed out of the matchup 11 times per Second Spectrum. Naturally, Trae calls for another screen to loosen things up.

But this one brings Jimmy Butler into the mix.

Young attempts to attack Butler, but doesn't have much success. Not only does Butler do a great job of bodying him up, Adebayo is chilling at the nail, ready to pounce if the handle gets loose.

With Adebayo dropping down to the nail, the kick-out to Bogdan Bogdanovic is technically there. Young kicks it to Bogdanovic, but Adebayo recovers and stifles his drive. Similar to the help he provided to Butler, Max Strus does the same. Bogdanovic then kicks it to Kevin Huerter with the shot clock winding down. Forced to make lemonade out of lemons, he drives against Strus.

If that was exhausting to read, imagine being tasked with generating good offense against that kind of pressure. Just look at this, man.

Young hasn't been having a good time in this series. He's averaging 16.5 points on 48.8% True Shooting. He has as many assists (24) as he does turnovers. A 21.2% clip from three is well below his level, and that's exacerbated by the fact that he's attempted more threes (33) than two-pointers (24).

It's hard to overstate just how much the Heat have thrown Young out of rhythm. One of the deadliest pick-and-roll threats in the league has been neutralized through four contests.

The Hawks are generating a shade under 0.93 points per possession (PPP) on trips featuring a Young pick-and-roll, per Second Spectrum. This may shock you, but this, too, is well below Young's regular season mark (1.06 PPP).

When asked about his three-heavy diet in Game 4, Young gave props to the Heat's pressure and activity.

"If you're watching the game, you'll see that they have five people in the paint when I have the ball," Young stated.

"They're doing a great job of showing help and not letting me get into the paint. If I try to drive by somebody, they're sending a double and forcing me to kick it to my teammates."

Look strictly at the pick-and-roll possessions, and things get murkier.

Considering the stakes, the experience and the talent around him (much more than his rookie season), you could reasonably argue that Game 4 was the worst pick-and-roll game of Young's NBA career.

Miami's switching took away early gaps, as it has been all series long. Of the 246 picks Young has received this series, the Heat have switched 97 of them (39.4%). Even beyond the switching, Young has seen a revolving door of point-of-attack defenders. Seven different players have defended Young for at least 15 possessions in the series, per NBA.com tracking data.

The Heat's help made it nearly impossible to get into the paint. And when forcing kick-outs, Young's teammates failed to deliver; the Hawks' "others" shot just 42.9% off of Young passes in Game 4. It was a hodgepodge of factors that led to an 86-point outing for Atlanta.

Even Young has been a bit surprised by what he's seen so far.

"I haven't been guarded like this... consistently since high school, and obviously it's a lot better competition," Young said. "It's hard for me to score a lot through the double-teams and face-guards at this level. It's a challenge for me... I gotta learn to fight through it and make it easier for myself and my teammates."

Answers will need to come soon, or this series will likely end on Tuesday.